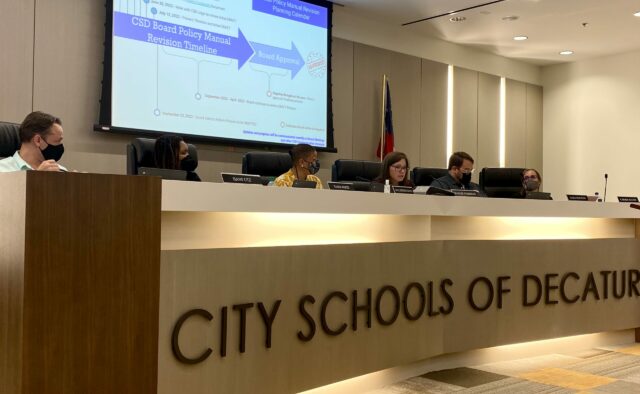 The Decatur School Board met on Aug. 9 to discuss the FY23 budget and board policies. Photo by Zoe Seiler.
Share

Decatur, GA — The City Schools of Decatur Board of Education at its Aug. 9 meeting decided not to act on a budget amendment after the administration found an error in the financial software that caused the district to overcount staff members.

The budget amendment would have funded 13 staff positions that were initially thought to not be budgeted for.

“We’ve been digging deeper into the budget, just been looking at the numbers, trying to make sense of them and got to a point where Ms. [Lonita] Broome, our chief financial officer, and I were like this really is not making sense to us,” Superintendent Maggie Fehrman said. “We did a deeper dive into the budget and what we identified was…that the financial software program that we are using had some kind of programming error, and it is double counting staff, so it overinflated our budget numbers, counting additional staff that shouldn’t be counted in our budget.”

At the July 12 school board meeting, the board approved a $640,000 budget amendment for three new positions, a superintendent search, increased fuel costs and increased insurance premiums.

The school board also learned that funding for 16 staff positions may be added to the fiscal year 2023 budget at a cost of $2.6 million. The board was going to consider a second budget amendment at the Aug. 9 meeting to address the funding for 13 of these positions. Three positions were approved at the July meeting.

During the meeting on July 12, Fehrman explained that the district needed to eliminate 26 positions through natural attrition, but only eliminated 10 positions. The FY23 budget was built on the assumption that 26 employees would be leaving the district.

The board did not vote on the amendment on Aug 9 to give the administration more time to look into the error and correct the budget in the budgeting system.

“We just need a longer runway to really look into that. I think it will impact the budget in a positive way, meaning I think where our overall budget is will go down, which is huge, so as we identify those errors,” Fehrman said.

School Board member Dr. Carmen Sulton raised a concern about teachers being paid on time. Fehrman said she believes those 13 positions that needed to be funded are already in the budget.

“The reason why I felt comfortable pulling the amendment is because I’m confident those teacher salaries are already in the budget, if not all of them, probably 99% of them,” Fehrman said.  “I would not make a move that would endanger a teacher’s paycheck. I am 100% confident that they will still be getting a check, and we are still in the financial situation to pay them for the full year.”

One goal throughout the budgeting process was to increase the district’s fund balance, Sulton said. Fehrman explained that there is about $10 million in the fund balance currently.

CSD had about $750,000 from the fiscal year 2022 budget that rolled over into the FY23 budget. Fehrman said most of that overage came from unspent salaries and benefits.

School board member Hans Utz noted that the budget has increased by almost $17 million since 2019.

“This year’s budget would make it $17 million had we approved the amendment today, a $17 million increase since 2019,” Utz said. “In fairness, I need to acknowledge COVID is exceptionally disruptive. It’s a bomb detonating in the middle of a budget, and it isn’t possible to be efficient when you’re worried about saving lives and continuing to deliver quality education to kids in a virtual environment without any roadmap or any path for how to get there.”

CSD did see some significant increases in costs throughout the COVID-19 pandemic. The cost per student rose from $11,000 to about $14,500 per student and the district hired more staff members.

“During this year, what we ended up doing was transitioning several positions that were being paid out of the general fund that we could pay out of CARES funds,” Fehrman said. “We took about $2.3 million of salary, paid for it out of CARES funds, and we knew that was going to expire at the end of 2020 and that we would have to encumber that as we moved into the budget for this year.”

Utz added that much of the increased expenses during the pandemic were in an emergency response to COVID-19.

“Those are by nature one-time or temporary expenses,” he said. “We’re now 18 months passed the peak part of the crisis, and I do firmly believe it’s time for us to start going into the budget and identifying some of those one-time increases and pulling them out of the budget to drive a little bit more efficiency.”

Utz said he believes the district can meet its objectives and find a way to decrease the millage rate, like the city of Decatur did this year.

“If we want to be able to invest in things like expanded dyslexia programming, if we want to find increased dollars for teachers salaries, if we want to invest in climate resiliency, carbon reduction, or any other significant program as a part of our strategy going forward, we have to start with taking the things out of the budget that shouldn’t be in there in the first place — the inefficiencies that are locking up tax dollars that are not being used,” Utz said. “Our budget last year was $4.2 million more than we needed. That is approximately $300 per taxpayer on the average home in Decatur that we took in and did not use.”