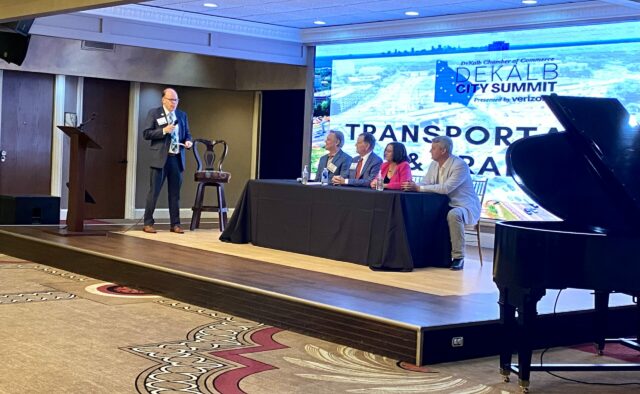 The event featured a keynote address from Anna Roach, executive director of the Atlanta Regional Commission, and panels featuring the mayors of Avondale Estates, Brookhaven, Clarkston, Decatur, Dunwoody, Pine Lake, Tucker and Stonecrest, as well as a council member from Doraville and the assistant city manager of Chamblee.

During the panel discussion workforce development and small businesses, Decatur Mayor Patti Garrett, Clarkston Mayor Beverley Burks and Stonecrest Mayor Jazzmin Cobble discussed the industries that are vital to their cities and how the cities are either attracting new businesses or supporting existing businesses.

In the city of Clarkston, several areas have been annexed into the city and part of this included expanding the city’s industrial park.

“We’re doing things to attract businesses to come into our industrial park is one thing,” Burks said. “About 80% of our businesses in our downtown and some of our other areas are from our foreign-born community. What we’re also doing is looking at how can we expand those businesses, not only from looking at how can we grow up in terms of development of projects, but also how we can grow out in terms of how can utilize the internet in attracting businesses to be a part of our community.”

The city also working to partner with local universities and other entities to support local businesses, especially when it comes to marketing.

Garrett said the city of Decatur is looking at the sectors of businesses that are coming to Decatur and how the city can capitalize on that.

“Our downtown development authority is really one of our strongest partners in helping us get the word out as to the kinds of businesses that we see locating in Decatur and that are a good fit for Decatur,” Garrett said.

Decatur has typically seen financial, legal services, insurance and real estate businesses, but the city is moving toward having more technology, advertising, media and information businesses.

“I think we really can’t meet our goals of equity, inclusion and being a welcoming and open city regardless of your economic status without having different housing options,” she said. “We have established a land trust. We also have an affordable housing trust fund. We are trying to use a lot of different partnerships as well as a lot of different strategies to address the lack of housing options in the city of Decatur.”

Housing is a challenge for the city of Clarkston as well. Burks said that about 80% of the city is rental properties.

“That is a struggle in terms of the balance of having the opportunity to have starter homes,” Burks said. “We are the gatekeepers to protect one of the…most precious things that we have is our land. We are going through the process right now of doing our zoning rewrite and looking at various options for increasing our housing stock for our community.” 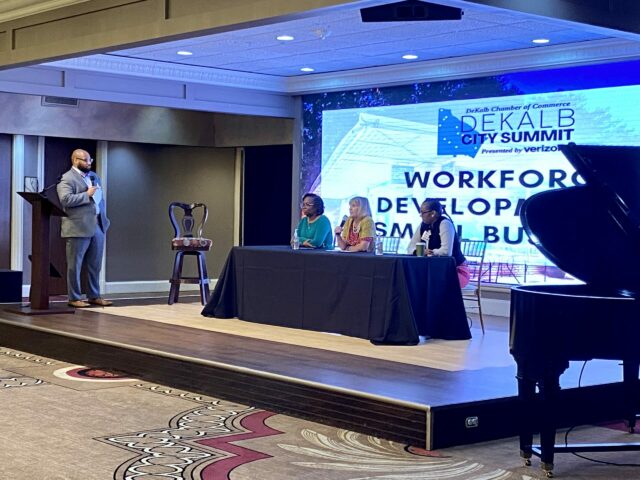 Express lane transit is planned to come to Northlake Parkway near Interstate 285. The interstate runs through the city of Tucker.

“It’s obviously critically important to us,” Auman said. “I have found sometimes the best way to really grasp the value of something is to imagine not having it. If somehow there were to be 285 managed lanes, ELT, all that with no access at Lavista Road or Northlake Parkway, we become in some way flyover country…”

Auman added that the first approach to transportation is to require less of it, but acknowledged that there are individuals who travel to and from the city for work and other reasons, so express lane transit would be beneficial for commuting.

“I talk about Tucker as being a place where you can live, work, play and pray all in your hometown. If you can do that, if you want to do that, you require a lot less transportation, but of course we’re not an island,” Auman said. “We have people who commute in and out for those various things, so ELT is the first best answer to that for people who want to come to or leave and return to the city of Tucker.”

Auman later added that the cities were critical in getting the county’s transportation special purpose local option sales tax passed. Tucker has been working to use TSPLOST funds to repave city streets like Mountain Industrial.

“We’re big believers in that local ability to raise the money, decide the priorities, spend the money, supervise the projects and do them in a way that benefits our cities first, but also our neighbors in the region,” Auman said.

The city of Avondale Estates is wedged between the Avondale MARTA station and Kensington MARTA station, and that area has attracted development inside and outside the city limits.

“One of the first projects that came in front of the board was the Willis, which is a mixed-use development near Sam’s Crossing on [U.S.] 278,” Elmore said. “We haven’t had a lot of development in Avondale in a long time, and that was the first big, nice project we got that landed in our laps. It was simply because it was close to the MARTA station.”

The project has 200 apartments and about 8,000 square feet of retail space. The developers also built a new sidewalk in front of the property and gave the city some land that is a park.

The next project in near the Avondale MARTA station that came before the city commission was the Alexan, now called the Jade at Avondale, that has 300 apartment units and about 5,000 of retail space.

The cities are also working to improve transportation and traffic in their areas. Avondale Estates is working on the road diet project of U.S. 278/ North Avondale Road. One goal of the project is to transform North Avondale Road from a state highway to a main street.

“The road diet will reduce some of the lanes. It will provide wider sidewalks on both sides, fewer curb cuts to improve pedestrian safety, better crossings for pedestrians,” Elmore said.

The city commission has also recently adopted a street grid to increase connectivity within the city.

“When we can, we will buy or take property and build streets,” Elmore said. “When we are low on cash, which may be the case, we provide incentives in the zoning ordinance for developers, so if they build the street, dedicate it back to the city, they get rewarded with increased density, additional stories, things like that.”