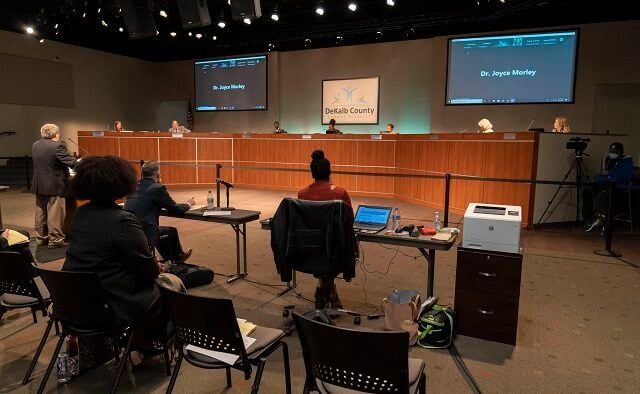 The DeKalb County Board of Education met on Monday, April 18, 2022. Photo by Dean Hesse.
Share

This story first appeared in The District, a newsletter published for Decaturish.com subscribers. People who receive The District are the first to know about important DeKalb County Schools news. To become a subscriber, visit supportmylocalnews.com

DeKalb County, GA —  At the DeKalb Board of Education’s regular meeting on  Aug. 10, outgoing Chief Financial Officer Charles Burbridge presented a financial corrective action plan for the district to the board.

The plan was created in compliance with state law following a designation of “moderate risk” for the district from the Georgia Department of Audits and Accounts.

The plan includes a timeline for conversion to the district’s new financial management system, including parallel validation runs for payroll beginning in September of this year and a scheduled cut-off of the legacy system in March 2023.

Quality Basic Education and SPLOST transactions have already been transferred to the new system. The district’s finance department began generating monthly reports in May that list all the financial transactions still being processed by the old software. In addition, a monthly review of financial data transfers has been implemented.

The corrective action plan must be signed by each board member and presented to the Georgia Board of Education within 120 days of receiving audit results. It was approved by the board via the consent agenda.

Board Chair Vickie Turner acknowledged that Aug 10 would be Burbridge’s last formal meeting with the board and thanked him for his efforts in improving the financial status of the district.

– Interim Superintendent Vasanne Tinsley and Associate Superintendent of Accountability Oliver Lewis offered a presentation that compared Measures of Academic Progress to last year’s scores, showing gains in math and reading for all grade levels at most schools.

Tinsley stated that these assessments should not be compared to the district’s Milestones scores which are near the bottom of metro area school districts.

School districts across the country have taken a hit on proficiency scores following lost learning time during the pandemic. Atlanta Public Schools, which has similar Milestones scores, has a detailed plan for how to catch students up. The DeKalb County School District has not yet released a plan.

“The district acknowledges the existence of gaps due to the past two years of the pandemic, and in some cases, pre-pandemic, and will continue to take measures to address those gaps,” said Lewis.

In response to a question from board member Anna Hill, Lewis said that the district planned to compare scores to national norms to get a sense of where DeKalb students stand.

– The board approved a contract for project management services to ACERM (a joint project between AECOM Technical Services and Corporate Environment Risk Management in an amount not to exceed  $15,185,671.64, to include the remaining E-SPLOST V projects and new E-SPLOST VI (2022-2027) program.

During the discussion, Hill asked about an apparent $250 million discrepancy between AECOM’s accounting and the district’s accounting, which was asserted last October by an independent auditor. Both Burbridge and interim Chief Operations Officer Richard Boyd have stated previously that the difference was due to certain expenditures by the district not being included in AECOM’s project management accounting.

Butler stated that land purchases accounted for almost $100 million of that difference, and the rest of the amount was information technology, furniture fixtures and equipment, and sometimes musical instruments.

Butler said that AECOM had successfully tracked down the discrepancies. “As of right now, those databases are 99.05% accurate. We try to reconcile every month and we’re getting closer and closer to zero as we get to the end of fiscal year 2021,” said Butler.

Further, Butler said that as the district fully implemented MUNIS, the problem would not perpetuate.

“Our systems experts tell us that MUNIS has application programmer interfaces which allow you to integrate systems into MUNIS if you know how,” said Butler.

Butler said that this would allow data to be shared on a weekly or monthly basis so that there will be no disconnect.
“That’s what we’ve proposed for the district going forward for SPLOST VI,” said Butler.

– The board voted to authorize a third payment of $22.5 million under the Gold et al vs DeKalb County School District settlement agreement. This settlement is the result of a class action breach of contract lawsuit against the district for suspending payments to the district’s tax-sheltered annuity plan 2009 without sufficient notice to teachers.

The board discussed the allocation of funds for the fourth and fifth payments, due October 12, 2023 and October 6, 2024 respectively, totaling $45 million.

Board member Dr. Joyce Morley questioned this decision, asking why the funds hadn’t been allocated from the beginning and why it would be done now.

Burbridge responded that the allocation prepared the district to be able to pay the settlement off early but allowed flexibility in case of unforeseen events.

During public comment, the president of the Organization of DeKalb Educators Deborah Jones pointed out that the district was making up for the lack of certified teachers by filling the positions with substitutes.

“Once again, we don’t have every classroom filled with a competent certified teacher,” said Jones.

Daniel Sobczak, a teacher at Southwest DeKalb High School stated that salaries in DeKalb are less competitive than in other Atlanta area districts, especially when you consider that cost of living increases were not keeping pace with inflation.

“The longer you stay in DeKalb, the less reward there is,” said Sobczak.

He went on to say that the district needed to give more attention to reducing stress on teachers by addressing the continued threat from COVID and reducing administrative burdens on teachers.

DeKalb resident Joel Edwards suggested that the school board create a policy that would protect whistleblowers in the district.

“Retaliation is a cancer in this school system,” said Edwards.

– The board approved an agreement for property and casualty insurance with Edgewood Partners Insurance Center d/b/a EPIC Insurance Brokers and Consultants (“Epic”) for an annual fee not to exceed $150,000.

– The board approved an agreement with Brentwood Services Administrators (“Brentwood”) as a third-party administrator of worker’s compensation claims, for an amount not to exceed $475,320 in fixed claim costs.

The board approved an agreement with Swift, Currie, McGee and Hiers, LLP (“Swift Currie”) as worker’s compensation and liability counsel.

– The board approved the purchase of $12 million in instructional materials from a lengthy list of approved vendors from ABC CLIO to Zaner-Bloser.

Morley stated that she did not feel the documentation of what instructional materials were being purchased and for what purposes was sufficient. Hill stated that she would like to see more information for the board and parents.

– The board approved a memorandum of understanding between the Georgia Department of Education and the DeKalb County School District on behalf of the Georgia Learning Resources System to provide professional learning and technical assistance for an amount not to exceed $460,000.

– The board approved a contract renewal for athletic equipment with Riddell/All American and BSN Sports, LLC, for an additional year through May 16, 2023, for an amount not to exceed $900,000.