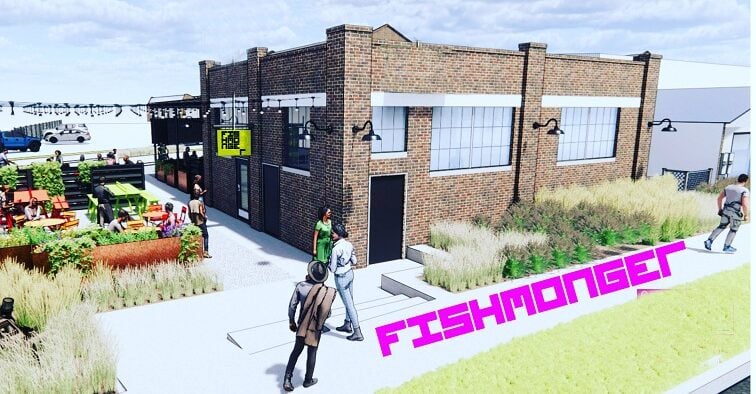 A rendering of the new restaurant. Image provided to Decaturish
Share

Atlanta, GA –– Local seafood joint Fishmonger is opening a second location in the Pratt Pullman District this fall after great success at Poncey-Highland, which opened just four months ago.

It will open in October. It will be located at the intersection of Arizona Avenue and Rogers Street, according to the Atlanta Journal-Constitution. The owner told Decaturish the specific address will be at Building 7 in the 200 Block of Rogers Street.

Fishmonger Co-Owner Skip Engelbrecht said that he and his business partner, Nhan Le, saw a niche to fill in Atlanta with a seafood market and cafe concept. After a trip to Florida together, they decided to bring back an “elevated seafood restaurant with a beachy, lunchy feel,” adding a modern and “hip” touch.

Back in Atlanta, they found a space, signed the lease and waited two years for a finished building. But as soon as they opened, “it was an instant success,” says Engelbrecht. They’ve been busy almost every day since.

“We always knew we wanted to do a few of them, so we just decided to pull the trigger,” Engelbrecht said. “We’re just super excited to come to the neighborhood and super excited to keep expanding.”

Fishmonger no. 2 will open in a larger space than the Poncey-Highland location, fit with a big patio and raw bar, a full beer, wine, and cocktail menu, and a little more service. There won’t be a seafood market to start, testing the demands of the neighborhood.

Engelbrecht said they knew they wanted to expand to east Atlanta, so when Pratt Pullman District owners, Maureen Meulen and Adam Rosenfelt asked them about opening a Fishmonger location in Kirkwood, it was a yes.

“Prior to this year, the Pullman Yard was still under major construction, but they’re wrapping up on all that. I think it’s just timing, the building, everything,” Engelbrecht said. “We’re friends with Maureen and Adam. They’re super cool people and super fun. They don’t do things conventionally, which I really appreciate, because we’re the same way. It’s a good little marriage.”

As for other future endeavors, Engelbrecht, Le, and Fishmonger Chef Bradford Forsblom have plans to open Small Fry at Atlanta Dairies this fall, too. The concept is a walk-up window with elevated fried food.

“There are some red lines on the permitting that we’re working through,” Engelbrecht added. “As soon as we’re done with permitting, we’ll get in the space and start figuring out what it calls for.”