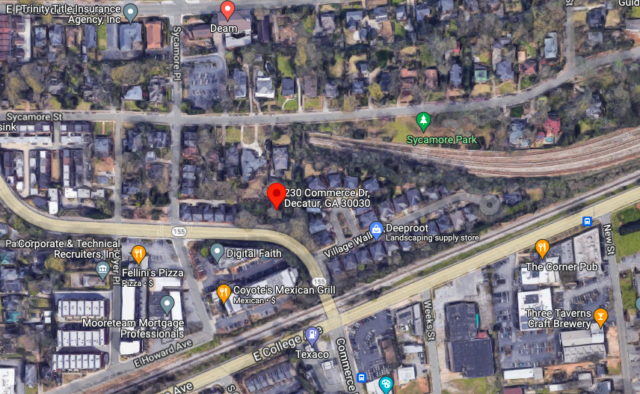 Decatur, GA — As construction is underway on the cottage court project in Decatur, trees have been removed from the site. According to the city arborist, trees were removed due to being in poor condition or dead.

About 25% of the existing trees were conserved. The tree plan was submitted and approved prior to the city commission updating the tree ordinance in January. Under the previous tree ordinance, 25% of existing canopy trees had to be saved, and new canopy had to be planted to obtain no net loss of tree canopy, City Arborist Kay Evanovich said.

“[Twenty-five percent] canopy cover for the site is 2,107 sq ft. Trees were saved in the amount of 2,218 sq ft of the canopy was conserved, meeting the requirement,” Evanovich said.

“The replacement canopy requirement is 8,200 sq ft of canopy [and] 33 trees are being planted back for no net loss of canopy,” Evanovich said. “It should be noted the trees existing on-site were covered by invasive weeds and vines, that is why there is a high number of fair and poor condition trees. The largest tree was hit by lighting and had major structural damage and had to be removed.”

Construction on the project, located at 230 Commerce Drive, began toward the beginning of August. At the Downtown Development Authority meeting on Aug. 12, Planning and Economic Director Angela Threadgill said the contractors have been working on grading and removing unhealthy trees.

The DDA is partnering with Atlanta Neighborhood Development Partnership to develop the project known as Oak Cottage Court.