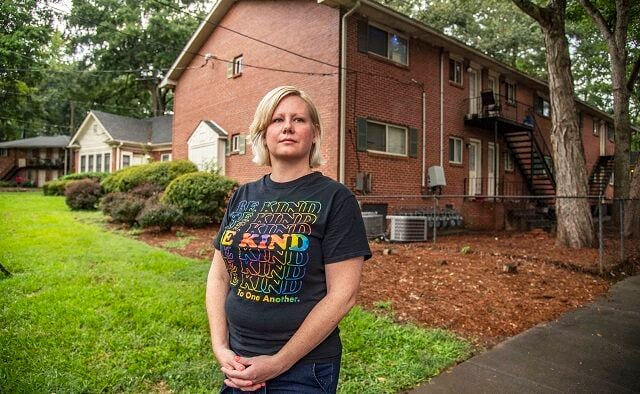 Justine Marie Bush stands outside the apartment complex where she lives at 750 East Lake Drive in Decatur on August 9, 2022. Photo by Dean Hesse.
Share

Decatur, GA — Residents of the apartments at 750 East Lake Drive in Oakhurst were recently given just over 30 days’ notice to move out of their homes as the property changed ownership.

The Braden Fellman company owned the property from 2019 until about June 2022. Wellroot Family Services, formerly known as the United Methodist Children’s Home, purchased the property. Residents were notified on Aug. 1 that they had to be out of their apartments by Sept. 9.

Wellroot did confirm that they own the property, but did not share more information about what the organization’s plans are for it.

“We regret that we may have been too eager to move forward with our plans for the property. Upon realizing that, we have reached out to all impacted residents to make the transition as smooth as possible,” said Allison Ashe, chief executive officer of Wellroot. “We will be talking to all interested parties about our plans for the property as they develop. We look forward to being a part of the neighborhood.”

Wellroot is a faith-centered family services organization that offers programs related to foster care, transitional and independent living and family housing. It is an agency of the North Georgia Conference of the United Methodist Church. The agency was called the United Methodist Children’s Home until December 2018.

Wellroot was previously located off South Columbia Drive in Decatur on the property that is now known as Legacy Park. The city of Decatur bought the property in 2017 for $40 million. The city and the Decatur Housing Authority are currently working on building the South Housing Village at Legacy Park, which will be 132 units of affordable housing.

According to the Decatur Affordable Housing Task Force report, 750 East Lake Drive is considered to be naturally occurring affordable housing. Residents of the apartments are frustrated that Wellroot is telling them to leave on such short notice.

Justine Bush has lived in the complex for about 19 months. She received a letter on June 9 that notified residents that the property had changed hands and been sold. They were told to pay rent with a money order or a cashiers check. They were provided with an address to send rent payments to and a phone number and name for maintenance requests.

“We didn’t really get any other information until a few days before the end of June, we got another paper notice taped to our door with a billing statement because our water has always gone through the management of the company, and then they bill it out to us. It was a paper statement with water, the trash fee and then the rent, and then a self-addressed envelope with the address to send the rent,” Bush said.

She was felt uncomfortable about mailing a money order and decided to drive to the address listed on the envelope to pay her rent. She drove out to Tucker and was confused because the address of the LLC that purchased the property was the same address as Wellroot. Until that point, she was unaware the nonprofit was her new landlord.

In the letter Bush received in June, the property owners are listed as 750 East Lake LLC. The address listed is the same address Wellroot uses.

“I was told to just give it to whoever answered the door, so that’s what I did,” Bush said. “I wasn’t given any kind of receipt or anything like that, and I was really uncomfortable with all of that.”

There was talk among residents about how their leases weren’t going to be renewed, and residents began looking for new places to live. Bush had just signed a new lease, which would end in May 2023.

Bush has a child in City Schools of Decatur and is a teacher for the school district.

“All of a sudden, the Monday before school starts in [City Schools of Decatur], those of us with leases that hadn’t been told that they wouldn’t be renewed were given our 38-day notice that we got taped to our door,” Bush said.

Leading up to that, Bush had called and talked to the property managers to try to get answers and figure out the future of her lease. She thought that she’d have secure housing until May, but she wanted to know if that would change, so she would have time to prepare.

Bush spoke to a man named Greg, although he did not provide her with his last name. According to Bush, he told her that if she was talking to her neighbors, she should read the tea leaves.

“I said are you letting me know that my lease will be terminated early, and he said, ‘I can’t say that,'” Bush said. “And he said that if that happens, you’ll have 60 days until you have to be out.”

Every time she spoke to either Greg or Tammy Norton, who was listed as the property manager in the letter, Bush was promised that the person in charge would call her back, and she asked multiple times to speak to someone who could provide answers.

“I had started asking questions before this about some things like trash wasn’t being picked up, yard maintenance wasn’t being done. I just had some inquiries about that. I wanted to know what was going on, what the plan was for the complex,” Bush said. “I just kept getting told that I would be contacted by the person who could answer the questions. When asked for names, I was told they were not allowed to disclose the name of the person who would contact me, or anyone else other than Tammy and Greg.”

Toward the end of July, she asked about when she would receive her statement to pay rent. Bush was told she could drop it off at Wellroot again, and Bush asked if Wellroot was the property owner’s office. Norton said they have an office but told Bush she couldn’t disclose the address, Bush said.

When Bush would ask questions of the property managers, she was met with the frequent answer of “I can’t disclose that” and told someone else would contact her.

“It’s been very frustrating, very disrespectful to those of us [who live there]. I’ve only lived there for about 19 months now, but some of those people have lived there for six, seven, eight, nine, 10 years. We have children in the school district,” Bush said. “Having to get this notice the day before school starts, when it’s such a family focused and community…it’s been rough. It’s been very hard. When it comes to the security of your residence, of your home, that’s a big thing.”

She added that the housing options are pretty slim when only given about one month to find a new apartment.

“It’s just so heartbreaking and hurtful to give us this little, tiny window of time,” Bush said. “That’s really not enough time to do anything. It’s really not, especially when I’ve been asking for transparency and there’s been none.”

Bush said she was aware of a rezoning effort that took place in October 2021, but she, and some of her neighbors, were not aware that the property had gone on the market to be sold when it did.

‘Not a great candidate for renovation’

“This property was one that we thought was not a great candidate for renovation because it had underlying issues with it, and continues to have underlying issues with it, that we thought a new building would be better suited to fix,” said Matthew Braden of Braden Fellman. “The issues are really just aging infrastructure. It’s nothing dire that anyone needs to be worried about today, but there are things that are costly to fix on renovation and in some cases are not easy to fix on renovation.”

In October 2021, Braden Fellman had submitted an application to the city of Decatur requesting the property be rezoned from RS-17, single-family residential, to RM-43, multifamily residential, to redevelop the complex and build 57 one-bedroom units and the building would have been three stories.

The site is home to a 16-unit multifamily complex built in 1964 and grandfathered in as an allowed nonconforming use when the area was rezoned to RS-17 in the 1970s.

“We know affordable housing is needed in Decatur. We think adding density with the new development offers affordable housing in a new building,” developer Cameron Grogan told the planning commissioners in October 2021. “This would be a state-of-the-art brand-new building that meets all of the modern codes, with underground parking, laundry facilities, everything you need.”

Although surrounded by single-family homes, the property’s current zoning allows for the construction of up to 22 townhouses on that lot that could be built without any rezoning or variances, Grogan added.

“But Braden Fellman Group [the property owner] is not a townhome developer,” Grogan previously said. “We looked at it, it would be profitable. But they are not interested in making a quick buck on 22 townhomes. They own real estate for the long-term all over Atlanta. They would rather build a multifamily development that they can keep for many years to come.”

Under Decatur’s inclusionary zoning ordinance, six of the 57 units would be reserved for renters making 80 percent of area median income (AMI) or less, he added, with the remaining 51 rented at market rate.

The project was met with opposition from the community and the city’s Planning Commission. During the Planning Commission meeting in October 2021, some members of the commission and some residents of the surrounding neighborhood expressed concerns that redevelopment of the complex would, in fact, reduce available affordable housing instead of producing more.

“The highest demand for us right now all across Atlanta is one bedroom,” Andrew Braden, also with Braden Fellman, told Decaturish. “We have a really hard time leasing two bedrooms and like a really hard time leasing three bedrooms. What we base our decisions off of is what we’re required to do, but then what the highest demand and revenue generator is.”

He added that one-bedroom units across their properties in Atlanta lease at a similar rate as two-bedroom units.

The discussion with the Planning Commission was ultimately tabled, and Braden Fellman didn’t bring the project back before the commission. They decided to sell the property after that.

Andrew Braden said the property lost money and that selling the property was the best financial situation for the company.

“It’s easier to sell it,” he said. “We bought it for a certain price, we made money off of it. We felt like this could be a really awesome opportunity for us and the community, but that we were going to have to fight really hard to get that done, and we could kind of wash our hands of the situation.”

Matthew Braden added that if the company isn’t in a position to bring the housing up to a level they are comfortable with, then they would rather not own the property.

Braden Fellman also strives to keep their residents happy, which Andrew Braden said is of the utmost importance.

“If we have to spend a bunch of money, and we’re not going to recoup an investment in order to make those residents happy, it’s a pretty easy business decision,” Andrew Braden said.