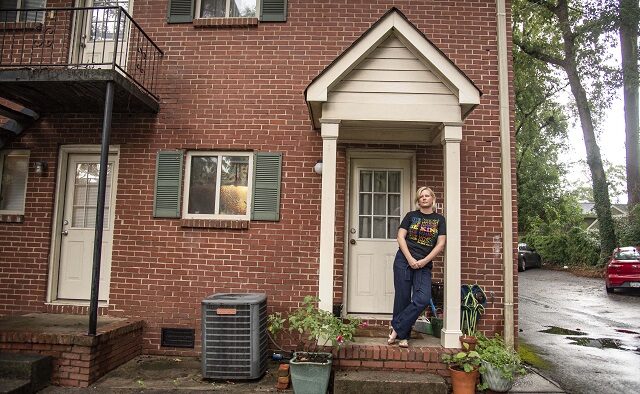 Justine Marie Bush stands outside her apartment at 750 East Lake Drive in Decatur on August 9, 2022. Photo by Dean Hesse.
Share

The organization’s purchase of the housing through an LLC resulted in letters being mailed to tenants allowing them 38 days to vacate the property. The apartments at 750 East Lake Drive are some of Decatur’s naturally occurring affordable housing units and city leaders are looking for ways to preserve this kind of housing.

Wellroot says its project is in line with the city’s goals.

“Decatur’s commitment to affordable housing is one of the reasons we were so excited about the property,” Wellroot CEO Allison Ashe said. “We absolutely plan to keep this location affordable, as we are big supporters of affordable housing, creating community and lifting up those in need. We do have a primary targeted population for this location, which is those young adults and possibly families who are in our programs.”

She said the organization’s plans for the property are still being developed.

The housing will be a mix of rentals and subsidized housing.

“For those young adults in our transitional living program, Wellroot does receive money from the state of Georgia to house them,” Ashe said. “Others in different scenarios might be paying a very modest amount of rent.”

There will be staff on site to act as property managers to monitor the site and provide support to residents, but there will not be live-in staff.

“There will be two residents in each young adult apartment, and the family units may have 3-5 occupants,” Ashe said.

Wellroot will also provide wraparound services, most of which will be offered at Wellroot’s Tucker office. Some services will be offered on site, like life skills classes in cooking or finances.

Wellroot had decided to look for a property to expand their ability to serve more people. The complex at 750 East Lake Drive was an ideal location for the organization as it features a commons area with a house in the middle, which will be used for resident activities, Ashe said. The property also provides access to public transportation.

Wellroot does not have any other programs like this in Georgia. They plan to be the long-term owners and are “100 percent in the business of providing affordable housing to those in need,” Ashe said.

The organization initially gave residents 38 days to move out, which caused some frustrations about the short notice.

Justine Bush has lived in the complex for about 19 months. She received a letter on June 9 that notified residents that the property had changed hands and been sold. But on Aug. 1, she, and others, were notified they had to move out by Sept. 9.

“All of a sudden, the Monday before school starts in [City Schools of Decatur], those of us with leases that hadn’t been told that they wouldn’t be renewed were given our 38-day notice that we got taped to our door,” Bush said.

She added that the housing options are pretty slim when only given about one month to find a new apartment.

“It’s just so heartbreaking and hurtful to give us this little, tiny window of time,” Bush said. “That’s really not enough time to do anything. It’s really not, especially when I’ve been asking for transparency and there’s been none.”

Bush told Decaturish last week that she now has until Oct. 1 to move out of her apartment. Ashe added it has been Wellroot’s plan and practice to accommodate requests from residents for more time.

“Wellroot has been consistently working with each individual resident to meet needs as they arise and are made known to us. In every situation where a resident has requested more time, more time has been given,” she said.

Ashe said the short notice was due to an internal communications error.

“The original time frame of the notice was an internal communications error, as we were simply too eager to move forward, and we regret that,” she said. “We immediately reached out to all six impacted residents to make this right as soon as we realized it and make the transition as smooth as possible. Move-out dates have been extended to accommodate individual resident needs.”

There are currently 11 tenants living at the complex, and all are in various stages of moving. Wellroot hopes to bring new residents to the property soon and is in the process of developing outreach plans to engage the community.

“Before bringing new residents onto the property, Wellroot plans a series of initial renovations and improvements followed by further property improvements and beautification in the winter and spring,” Ashe said.

Before 750 East Lake was sold to Wellroot, a developer had plans to tear it down and build almost 60 one-bedroom apartments.

“This property was one that we thought was not a great candidate for renovation because it had underlying issues with it, and continues to have underlying issues with it, that we thought a new building would be better suited to fix,” said Matthew Braden of Braden Fellman. “The issues are really just aging infrastructure. It’s nothing dire that anyone needs to be worried about today, but there are things that are costly to fix on renovation and in some cases are not easy to fix on renovation.”

In October 2021, Braden Fellman had submitted an application to the city of Decatur requesting the property be rezoned from RS-17, single-family residential, to RM-43, multifamily residential, to redevelop the complex and build 57 one-bedroom units and the building would have been three stories. Six of the 57 units would have been reserved for renters making 80% of area median income (AMI) or less, with the remaining 51 rented at market rate.

The project was met with opposition from the community and the city’s Planning Commission. During the Planning Commission meeting in October 2021, some members of the commission and some residents of the surrounding neighborhood expressed concerns that redevelopment of the complex would, in fact, reduce available affordable housing instead of producing more.

Andrew Braden said the property lost money and that selling the property was the best financial situation for the company.

“It’s easier to sell it,” he said. “We bought it for a certain price, we made money off of it. We felt like this could be a really awesome opportunity for us and the community, but that we were going to have to fight really hard to get that done, and we could kind of wash our hands of the situation.”

Matthew Braden added that if the company isn’t in a position to bring the housing up to a level they are comfortable with, then they would rather not own the property.

Wellroot purchased the property in June under the name of 750 East Lake, LLC, which Ashe said is standard real estate practice. The purchase price was $3.4 million, according to information provided by DeKalb County.

The city of Decatur paid Wellroot, formerly known as the United Methodist Children’s home, $40 million in 2017 to purchase the property. The property located off South Columbia Drive, is now known as Legacy Park. The city and the Decatur Housing Authority are currently working on building the South Housing Village at Legacy Park, which will be 132 units of affordable housing.

Under city zoning law, the city commission won’t be voting on Wellroot’s plans for the 750 East Lake apartments.

Decatur Planning and Economic Development Director Angela Threadgill said Wellroot’s intended use of the apartments would not require rezoning and doesn’t meet the city’s definition of transitional housing.

“Transitional housing is designed to provide homeless individuals and families with the interim stability and support to successfully move to and maintain permanent housing,” Threadgill explained. “The housing provided by the new ownership is not transition housing, per the definition above, and has been described as independent living of long-term residential living with lease agreements customarily found in multifamily apartments.”

But Wellroot’s leaders did contact the city’s leadership about its plans.

Ashe approached City Manager Andrea Arnold and Mayor Patti Garrett to give them a heads-up about their project.

“Our understanding is they weren’t going to be breaking leases,” Arnold said.

When the word got out that Wellroot had given 38 days to find a new place to live, Ashe contacted Garrett and Arnold again to explain the situation.

Ashe explained there had been a “miscommunication,” Arnold said.

“Allison was very upset when she found out that these notices went to everybody,” Arnold said.

According to the Decatur Affordable Housing Task Force report, 750 East Lake Drive is considered to be naturally occurring affordable housing.

NOAH are the privately owned older apartment buildings, duplexes, and triplexes that are not subject to Decatur Housing Authority regulations or dedicated senior living housing. For-profit developers can afford to purchase these older properties quickly at market value or above and redevelop them. The high costs for land and for labor in the intown Atlanta area mean that it is only profitable for them to build high-end housing in those spaces.

The city 2021 created the Decatur Land Trust in 2021, a nonprofit designed to address the city’s loss of affordable homes.

City Commissioners said the recently created land trust could prevent something similar from happening in the future. But the land trust doesn’t have the funding to buy these properties, Commissioner Lesa Mayer said.

Mayer also serves on the land trust board as its vice chair.

“The Decatur Land Trust is going to be focused on helping to preserve those naturally occurring affordable housing units in the city, but in order to do that it will need the funds to be able to make those purchases, and it’s just not there yet,” Mayer said.

Mayer said there are a variety of possible funding options, including grants and contributions from the city. Mayer said the land trust is “trying to ramp up as quickly as it can.”

“But, you know, like everyone, we’re dealing with the challenges of a competitive market and things happening faster than we may be able to move,” Mayer said.

Valarie Wilson, a former Decatur School Board Chair who also sits on the land trust board, agrees the nonprofit could be useful for maintaining what naturally affordable housing the city has.

“I wish the land trust had been in place and had been a viable option,” Wilson said.

Mayor Pro Tem Tony Powers would like for the city’s leadership to have a “right of first refusal” to buy these properties before they go on the market.

“As we get the land trust up and running, and they get capital, they can hopefully step up and be a part of that conversation,” Powers said.

Commissioner George Dusenbury is also on board with using the land trust to acquire these properties.

“Every situation is different, but in the end, real people suffer, and it leaves a hole in our social fabric,” Walsh said. “I would like to know more about Wellroot’s plan for this property, and I think it is their story to tell. Let’s give them a chance to do that. I don’t have enough information about this particular transaction, but I can say that there will be instances in the future when our hope is that the Decatur land trust will be able to help preserve naturally occurring affordable housing and that we will also have more tools in our toolbox to encourage the owners of such properties to work with the city when they do decide to sell.”