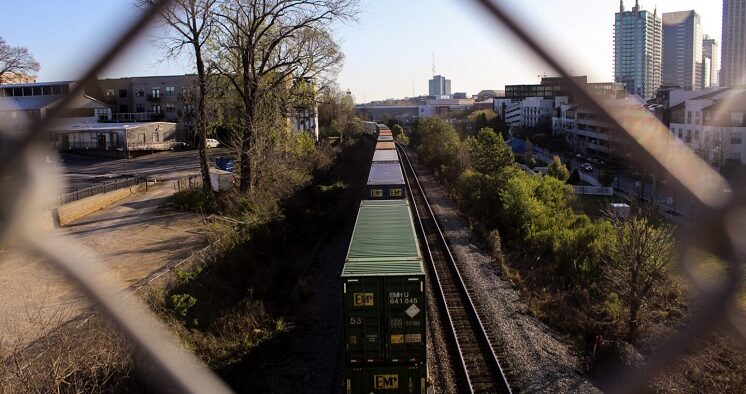 Atlanta-based Norfolk Southern says it plans to modernize close to 1,000 of its locomotives by 2025. (Emil Moffatt/WABE)
Share

Atlanta, GA — The electric vehicle market in Georgia continues to gain momentum. But powering locomotives with alternative energy sources is expected to take much longer.

While the average driver keeps their car for eight years, locomotives have a much longer lifespan. That can make a transition to alternative energy sources a longer-term proposal for rail lines.

“We have to make sure when we’re spending money on an asset, that we’re comfortable with the decisions we make now that are going to be with us 10, 20, 30 years from now,” said Jamie Helmer, the director of fuel efficiency with Atlanta-based Norfolk Southern.

Helmer says there are a lot of exciting developments when it comes to the locomotive of the future.

“We’ve been looking at things like battery electric; we’ve been considering hydrogen and hydrogen hubs that are going to be coming,” said Helmer.

While diesel powered locomotives aren’t going away any time soon, Helmer says there are ways to make them fuel efficient such as friction modification and adding more train cars and cargo in order to reduce trips. She says they’ve also cut down on time the trains spend idling.

“If we predict that the locomotive is not going to be needed for X amount of time, we’re gonna shut it down instead of just letting it run,” Helmer said.

Josh Raglin, Norfolk Southern’s chief sustainability officer, says the company has modernized hundreds of locomotives in the last six years. He expects that figure to reach close to a thousand by the year 2025.

“We’ve invested over a billion dollars and that’s just in this one program, converting DC locomotives over to AC traction power,” said Raglin. “And that can improve fuel efficiency up to 24% per unit.”

Raglin says recent federal legislation such as the bipartisan infrastructure act, should lead to more announcements in the coming year about funding for innovation in locomotives or lift equipment used in railyards.