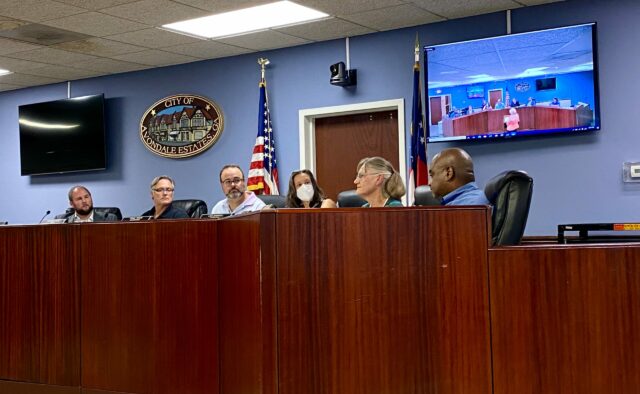 The Avondale Estates City Commission, during its meeting on Sept. 14, 2022, discussed corner lot setbacks and the maturity of the bond anticipation note. Photo by Zoe Seiler.
Share

Avondale Estates, GA — The Avondale Estates City Commission, at its Sept. 14 meeting, approved an amendment to the city’s zoning code to reduce the side yard setbacks for corner lot properties zoned R-12 and R-24.

The city’s zoning code initially established a front yard and street side setback of 40 feet for properties zoned R-12 and R-24.

City staff worked with Lord Aeck Sargent, an architectural and design firm, to evaluate the existing conditions of corner lots, the ability to build on lots with different street-side setbacks, and the typical widths of lots.

“This has been an ongoing conversation over the last several meetings as we’ve grappled with the right dimensions and where this might lie so as to still discourage tear downs, encourage rehab, mitigate against tall, overly large structures, but also be relatively easy for people to understand the rules and understand the ability to implement them, and not to be overly Draconian,” Assistant City Manager Shannon Powell said.

The amendment was further changed before the vote. In the amendment, the residential regulations for the corner lots are set based on if the width of the front yards are 90 feet or less, or greater than 90 feet.

For properties zoned R-24, the side yard setback is 20 feet when the front yard is less than or greater than 90 feet wide, and 28 feet high or less.

“There is a possibility that we might see very small lots where this could be impactful and in those cases, [the city commission] would probably be asked for a variance, but I think we can’t zone for absolutely every condition and that would handle that on that end,” Powell said.

She added that for larger lots, the 20-foot setback continues to be fair and addresses the size of bigger lots.

The amendment passed with a 4-1 vote, and Commissioner Lionel Laratte cast the opposing vote. Laratte said he was concerned about the long-term impact of the setbacks. He was also curious about how the change would impact tear downs and the character of the residential areas.

“I don’t think it’s any secret that I’m a preservationist. I want to preserve as much of the character and architecture of the residential area as possible,” Laratte said. “My primary concern is that these are questions that I think I should have asked during the entire zoning [code] rewrite.”

Powell said the corner lot setback “doesn’t really protect a historic structure. I think we’ve landed in a place that’s fair and allows people to do either or.”

If the city commission wished to further protect historic or older buildings, that would require a different approach, Powell added.

“We’re still trying to create a zoning code that isn’t specific for each property but is a general application,” she said. “I believe that the side yard backs, 15 and 20 feet, are very close to generally where we are overall from a city perspective. I think it’s likely to be consistent with what we’ve seen in the past in the city in terms of setbacks.”

Laratte was also concerned that the intent of the zoning code regarding R-12 and R-24 properties wasn’t clear, and wondered if the city commission would be discussing other aspects of the code in the near future.

“I think we didn’t have as clear of a definition for these areas that we’re talking about,” Laratte said. “My belief is that a lot of this could have been mitigated if we did have a clear understanding of what we’re driving toward.”

City Manager Patrick Bryant said the intent for the historic district is demonstrated in the city’s historic preservation guidelines.

“The zoning code, the document itself, is the intent. The zoning code lays out what you can and cannot do in terms of developing within the city boundaries,” Bryant said. “It’s very common for municipal zoning codes to evolve, because we run into things that there [was] no way we could have considered ahead of time.”

– In other business, during the work session, the city commission discussed extending the maturity of the bond anticipation note an additional year. The initial closing date of the BAN is Oct. 31.

The city commission issued the BAN in 2019, which acts as a line of credit the city can borrow from, City Manager Patrick Bryant previously said. The board issued the BAN to borrow money to develop the Town Green.

Decaturish previously reported that the city would only borrow the necessary amount to complete the project, and not borrow the entire amount of the BAN. The BAN also would not incur debt immediately.

– The first phase of the North Woods stormwater project is anticipated to be completed by Sept. 30. Phase one of the project has primarily focused on building the recreational trails, which connects the sidewalk ending at Berkeley Road, on the north side of Lake Avondale, to the existing path.

“The underground gabion wall has been installed and inspected by Long Engineering, to protect Cobbs Creek a second row of silt fence will remain after the first portion of the project is completed,” Bryant said. “The final stabilization of the trail will take place over the next few weeks as grass is established, and the grant with the Land and Water Conservation Fund is set to be approved and inspected at the end of September.”