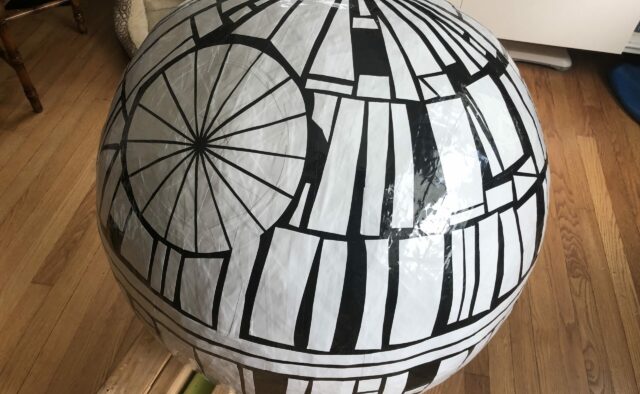 Wade Moricle and his family are attempting to break the Guinness record for the world's largest ball of stickers. Photo courtesy of Wade Moricle.
Share

Avondale Estates, GA — One Sunday in 2018, a fifth grader rolled up some heart stickers into a small ball to begin the goal of creating the world’s largest sticker ball. To date, the ball weighs in at almost 600 pounds.

Sofie Moricle got the idea from the Guinness Book of World Records that she bought at a book fair in fifth grade.

StickerGiant set the original record at 244 pounds in 2016 to celebrate national sticker day. StickyBrand broke that record in 2020 with a 308-pound sticker ball.

After looking through the book, Sofie told her parents that she thought they could break the record for the world’s largest sticker ball. At the time, the sticker ball didn’t look that big to her in the photo, said Wade, Sofie’s dad.

“She comes home from church and she had this eensy weensy little ball of heart stickers that she had just wadded up into a ball,” Wade Moricle said. “That was the start of the thing. After about a year, the sticker ball looked like a softball, and it weighed about a pound.”

At the beginning of the sticker ball journey, Wade would buy stickers from Dollar Tree to add to the ball, but he eventually realized that wasn’t going to help break the record, which is solely based on weight. Sticky Brand makes bumper stickers, so the vinyl bumper stickers added weight to their ball.

“I tried to think outside the box a little bit, and then I realized that I had done some business with Signarama, which is in [Decatur],” Wade said.

He talked to owner John Conley, at the time, and asked if the business had any waste stickers the family could “funcyle” for the project. Conley agreed, since the city of Decatur didn’t pick up their stickers as waste because the adhesive gums up the garbage trucks. Current owner Danya King also agreed to provide stickers for the project when Conley retired.

“So, for the last three years, there’s [been] a box in the back of their warehouse and I swing by once a week and I get the stickers,” Wade said.

The stickers come in large rolls, so the Moricle family cut the rolls into bumper-sized strips. That’s when the sticker ball really began to grow.

The ball has also taken on several themes with various layers of stickers, such as Christmas, Easter, Valentine’s Day, Fourth of July, St. Patrick’s Day, Halloween, Star Wars, a giant eyeball, a Magic 8-Ball, and a celebration of graduation from seventh grade.

While most of the stickers came from Signarama, just about any kind of sticker has been added to the ball, including stickers from pieces of fruit and library stickers.

“My office used to be in Emory libraries and they had a whole bunch of stickers that go on the inside of books, so the adhesive is really, really strong,” Wade said. “The stickers were out of date and could no longer be used and so they just gave them to me. There’s thousands and thousands of Emory library stickers.”

The various periods of quarantine during the COVID-19 pandemic kept the family secluded in their home for about a year, but the sticker ball gave them something fun to work on.

The sticker ball was also a therapeutic activity for Wade when he went through cancer treatment in 2021. He was diagnosed with stage three colon cancer in January 2021.

“Really and truly, the sticker ball was very relaxing. It was something that was kind of mindless, and you would just sit there, and you would peel stickers. Oddly enough, I’ve become very adept at peeling stickers and putting them on the ball without getting the little creases in them,” Wade Moricle said. “When you combine COVID plus cancer, you end up with a 600-pound sticker ball.”

Wade said he estimates the ball is actually about 575 pounds currently. The last time he weighed the ball, it was 542 pounds. Throughout the process the family has figured about how many stickers weigh one pound.

“We’ve added about 10,000 stickers on it since then, so I estimate currently it weighs about 575 pounds. The actual weighing of it for Guinness is in two weeks and there’s a good chance that it’ll be over 600 pounds by then,” Wade said. “Currently it’s over 185,000 stickers…by the time we get to two weeks from now, it’ll probably be over 200,000 stickers, I would imagine.”

Wade Moricle and his family will do a weighing ceremony during the Avondale Estates City Commission meeting on Sept. 28 at 5:30 p.m. The record is anticipated to be in the 2024 Guinness Book of World Records.