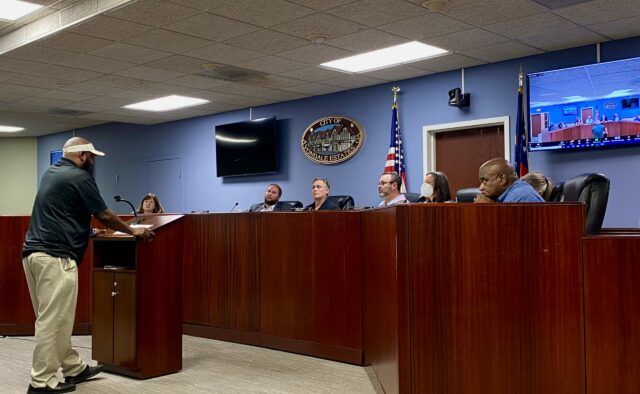 Avondale Estates, GA — Members of the Avondale Estates Public Works Department asked the city commission, during a work session on Sept. 14, to consider eliminating the back door garbage pickup service and moving to curbside pickup.

Members of the department shared their stories of working for the city and their various encounters with residents and dogs while on the job.

Marcel Jackson, public works director, came to Avondale about two years ago. He previously worked in public works for the city of Montezuma, Ga., and saw the city shift from back door sanitation service to curbside pickup.

He added that it’s been tough to hear the frustrations of his staff.

“I want to be a part of this change in Avondale,” Jackson said.

Some of the benefits of shifting to curbside pickup would be the department would be more modernized and more efficient, and the city will be more competitive in recruiting new staff, Jackson said.

Don Huff has served as a sanitation manager for public works for four years.

“One of the first concerns brought to my attention by the associates was about the back door service and I quote the associate stated that ‘it’s demeaning, degrading, and although we work with garbage, we’re not garbage,'” Huff said.

In his tenure with the city, he has encountered interactions with unrestrained pets, which resulted in three dog attacks, close calls with raccoons, possums and other rodents in garbage cans, and unsecured open garbage, he said.

“And now to the not so exciting part, associates being hosed down with water hoses by residents, scorned and poked in the chest, told not to cross over in my yard or simply just stay out of my yard,” Huff said.

He has also observed some residents bring their garbage out when they hear the truck, and “it should be out by 7 a.m. so we could do our job efficiently,” Huff said.

“If the garbage was place on the curb by 7 a.m. this would reduce 95% of the missed garbage complaints,” Huff said.

Curbside garbage pickup would also minimize unpleasant interactions between the sanitation workers and residents, he added.

“It would eliminate the liability risk to the city, homeowners and the associates [with] being on private property,” Huff said. “This would help us be more efficient in our duties, increase the morale and retention of our staff. We enjoy working here in the city. We’re just asking for a little help.”

“I got up to show him. [The resident] came out of the house and poked me in the chest and told me I was doing a bad job of training my people,” Johnson said. “Another time I was verbally disrespected by a resident because of miscommunication.”

The resident had informed another public works employee that she didn’t want anyone in her yard to get the garbage.

“I was unaware of the incident. She was aggressive and disrespectful,” Johnson said.

“Later on, after I had told my supervisor, and notified them with protocol and everything that goes on, when reinforcements came in when the local authorities arrived, the resident got hostile with me. His claim was that since he didn’t see the dog attack me, then maybe it wasn’t his dog that bit me. There’s no other dogs in this area,” Kinchion said.

He added that the employees never know what they will encounter while on the job, and when they do face a challenge, they never know how the homeowners will react.

“Safety is the biggest thing that you want to feel in these backdoor services. I want to be able to do my job efficiently, safely, and be treated and treat people with the utmost respect,” Kinchion said. “If cans were on the curb, it would free up so much time because we could do it faster and efficient, there’d be less confrontation or any room for confrontation with animals or residents.”

Tommie Patterson, another worker, said he has been verbally abused often.

“But as an older guy, I don’t be wanting you to come up in my face cussing me. I’m not doing nothing but my job, but this is what happens pretty much on a daily basis,” Patterson said. “The back door service is more of a hindrance than good because you have so many situations and so many problems.”

“Everybody would be able to do their jobs and then help other people in other departments, which we call cross-training, but we barely can get the garbage sometimes, so there’s no room to cross train,” Patterson said. “Help us, preserve us, so we can stay here and do our jobs.”

Adrian Langston was hired as the city’s greenspace manager a few months ago. He hopes to develop custom vision plans and maintenance calendars for the city’s greenspace, create an invasive species control calendar, and establish a citywide street tree pruning schedule. He would also like to cross-train the staff.

“Right now, the only thing I can do is plan. I have no clear path for implementation, and one of my biggest obstacles is backdoor pickup,” Langston said. “We are a small town, and we run a lean operation out of necessity. When a short week comes up, or we get a rash of callouts, it’s all hands on deck to keep solid waste collection on time.”

Public works averages 50 callouts per month, Jackson said. City Manager Patrick Bryant added there are about 20 working days in a month, which means there’s about 2.5 callouts per day. That means about two to three workers are being pulled from the greenspace crew every day to do sanitation.

“The greenspace crew is only six guys, so we’re essentially cutting the crew in half every single day,” Bryant said. “There’s kind of two things to this puzzle. The reason people are calling out is because their bodies can’t take it anymore.”

If the strain is taken away, callouts would drop and if callouts drop, the greenspace crew is fully staffed, Bryant said.

The city commission did not take any formal action related to the backdoor garbage pickup. The commissioners were open to continuing the conversation and exploring possible changes that could be made.

The commissioners also extended their appreciation to the public works staff for the work they do for the city.

“I don’t know if it’s my place or not, but I’d like to personally extend an apology to you for the mistreatment that you have experienced in doing this job,” Commissioner Lionel Laratte said. “I appreciate your dedication and your professionalism in staying here and doing the job anyway.”