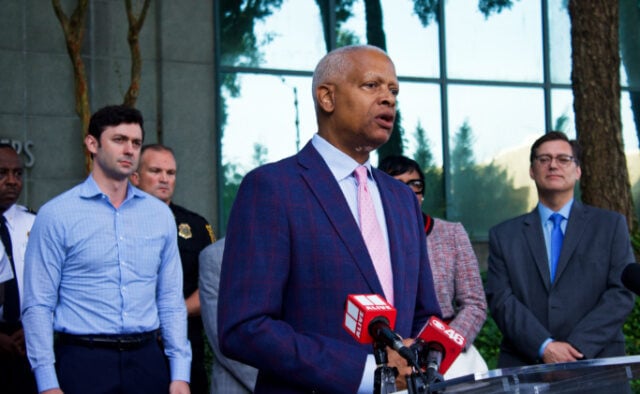 In Georgia, over 1.5 million people will be eligible for student debt relief, Johnson said.

“Even more astounding, nearly 70% of the borrowers in Georgia who are eligible for loan forgiveness are Pell Grant recipients, totally more than one million people,” he added.

President Joe Biden announced on Aug. 24 that the U.S. Department of Education will provide targeted debt relief to address the financial harms of the COVID-19 pandemic. Pell Grant recipients will receive up to $20,000 in debt cancellation for loans held by the Department of Education, according to a press release.

Non-Pell Grant recipients will be provided up to $10,000 in debt cancellation for loans held by the Department of Education.

“Borrowers are eligible for this relief if their individual income is less than $125,000 ($250,000 for married couples),” the press release states. “No high-income individual or high-income household – in the top 5% of incomes – will benefit from this action.”

Biden also extended the pause on federal student loan payments one final time until Dec. 31. Borrowers should expect to resume payments in January 2023.

The Department of Education is also proposing a new income-driven repayment plan that will cap monthly payments for undergraduate loans at 5% of the borrower’s discretionary income. Those who qualified for the Public Service Loan Forgiveness program will additionally be given an appropriate credit toward loan forgiveness.

The administration anticipates that over 40 million borrowers are eligible for the student debt relief plan, and over 20 million people could see their entire remaining balance discharged, said Carmel Martin, White House deputy assistant to the president for economic mobility.

James Kvaal, United States Under Secretary of Education, added that others will benefit from lower balances and lower payments.

He also said that college is meant to help people up the economic ladder, but for many borrowers, student debt becomes an anchor that weighs them down.

“Now, we’re focused on putting the president’s plan into action. When payments resume, we want borrowers to succeed. The system we had before the pandemic was not working,” Kvaal said. “In the coming months, we will deliver relief to millions of borrowers, we will prevent millions from landing in default and we will make repayment more affordable than before.”

The U.S. Department of Education is working on the process for executing the initiative and plans to open up applications in early October. Once that is up and running, the department will work to process the claims by the end of the year, Martin said.

“We are working very hard to make sure that it is an easy process for borrowers. That is our top priority,” she added.

The student debt crisis has been decades in the making, Johnson said.

“In my home state, Georgians are struggling with rising student debt, as much if not more than the rest of the nation,” he said. “Georgia has the third-largest student loan debt in the country, with roughly $68 billion in total debt that averages to about $41,000 per borrower.”

He added that he’s pleased that the Biden Administration is extending a helping hand to loan borrowers, particularly minority students and those from modest economic backgrounds.

Sen. Elizabeth Warren (D-MA) noted that student debt is a burden and some borrowers are frightened by what that debt means for their futures.

“The president has aimed help directly where it is needed most, directly to working families. Ninety percent of those who benefit from the president’s student debt relief plan are people earning less than $75,000 a year. Not one penny of help goes to someone making more than $125,000 a year,” Warren said.

She added that debt cancellation is about changing the lives of middle-class and working families.

“Cancelling student debt is the first big step toward undoing the student debt crisis that has kept too many families trapped in a debt prison. The Biden Administration is not stopping at cancellation. It is taking key steps to fix the broken repayment system and to make sure this crisis does not occur again,” Warren said.