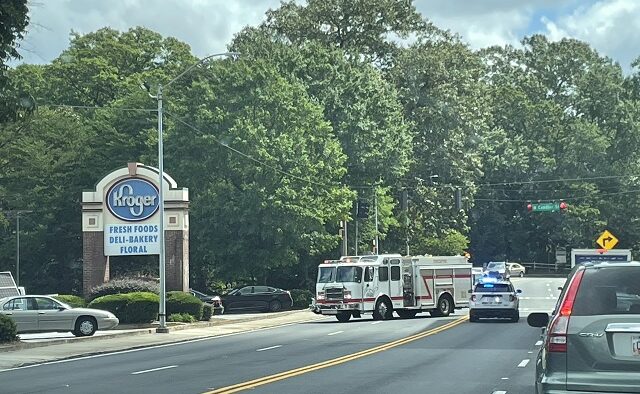 A crash near the Decatur Kroger sent a pedestrian to the hospital on Sept. 3.  Photo provided to Decaturish
Share

Decatur, GA — A crash near the Decatur Kroger sent a pedestrian to the hospital on Sept. 3.

Police responded to the crash on Saturday, Sept. 3, before noon. It occurred at the intersection of Commerce Drive and North Candler Street.

Sgt. John Bender said the “investigation revealed a pedestrian was crossing over Commerce Drive utilizing a crosswalk and a white Ford Expedition was turning onto Commerce Drive from North Candler Street. The driver of the Ford did not see the pedestrian in the crosswalk and struck them while turning. The pedestrian suffered injuries from the [crash] and was transported to an area hospital for treatment. The driver of the Ford was cited for failure to yield to a pedestrian.”

It’s the same crosswalk where a pedestrian died in 2018. In 2019, the woman’s family filed a lawsuit against the city of Decatur, the Georgia Department of Transportation and engineering firm GCA claiming that obsolete traffic signals led to her death in 2018 while the pedestrian was using a city crosswalk.

The lawsuit also alleged that within weeks of the pedestrian’s death, Decatur directed GCA to extend the crosswalk time for pedestrians to cross Commerce Drive, replace the traffic controller and add a “leading pedestrian interval,” also known as an LPI. Additionally, following the pedestrian’s death, GDOT “acted to correct the danger to pedestrians in Downtown Decatur by planning and executing a light re-timing project for the entire downtown Decatur area,” the lawsuit states.

The city’s insurer settled the lawsuit for $5 million. The city did not admit any wrongdoing. For more information about that case, click here.