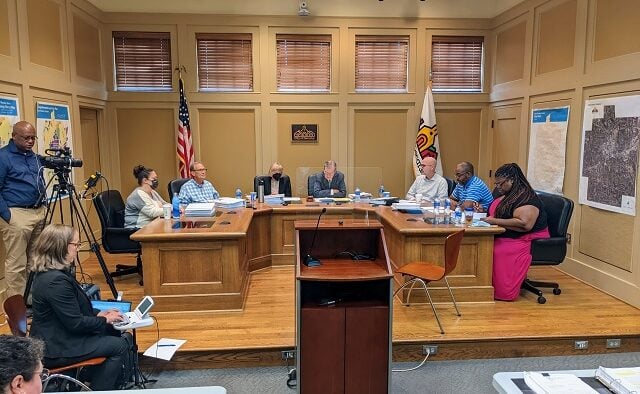 The Decatur Retirement Board met on Sept. 30 to discuss a firefighter's request to retire on disability at a higher rate than the city offered. The request is at the center of a lawsuit that revealed alleged misconduct by the city's former human resources director. Photo by Dan Whisenhunt
Share

Decatur, GA — A document related to a lawsuit against the city of Decatur accuses the city’s former human resources director of making homophobic, racist remarks.

The city fired the employee following an investigation after finding evidence to substantiate the allegations.

In response to questions from Decaturish about the document, the city of Decatur provided a letter written by Assistant City Manager Teresa de Castro showing the city fired that HR director, Connie Jacobs-Walton, in March 2020. She had worked for the city as HR director since March 2013, according to her LinkedIN profile. The city found she violated a number of city policies, including a mission statement that includes “respect for other people” as one of its tenets.

“The purpose of this letter is to inform you that I am terminating your employment with the City of Decatur,” de Castro wrote to Jacobs-Walton. “This decision is based on the violations of the city policies listed below and more specifically outlined in the pre-termination letter you received on Monday, March 2, 2020.”

Jacobs-Walton is now accused of discriminating against a firefighter who sued the city of Decatur two years ago.

The firefighter, Bridgit Christensen, sued the city of Decatur in October 2020, claiming the city defrauded her out of her pension. She asked for a disability payment that should have been at least $3,500 a month, citing an injury she received in 2016 while riding in a fire truck. That amount was subsequently recalculated to be about $4,800. The city argued that under the city’s plan, amended in 2019, she was only entitled to receive about $400 a month.

Then, in May 2021, Christensen amended her complaint to include an allegation that the city had discriminated against her because she is a lesbian. The amended lawsuit says, “at least five other male, heterosexual, similarly situated firefighters employed by the city of Decatur were allowed to retire with Total and Permanent Disability in recent years.”

A federal judge ruled in March of this year that Christensen had not exhausted all her administrative remedies with the city because the Retirement Board never officially ruled on her case. The judge ordered the case closed until she completed that process.

The city’s Retirement Board met on Friday morning, Sept. 30, to discuss the matter. That meeting concluded at 3:40 p.m. after hours of arguments from attorneys. The board has 60 days to rule on the case.

The letter says, “The city has a recorded history of Jacobs-Walton demonstrating a discriminatory animus towards non-heterosexual individuals, including allegedly referring to such persons using homophobic slurs, telling people that being gay is ‘wrong,’ being hesitant to have two gay males in her department because ‘they might start arguing and acting like women,’ and telling others that she needed to rub hand sanitizer on her hands after shaking hands with a gay employee because she didn’t know where the employee’s hands had been and the employee is ‘in that lifestyle.'”

Ed Buckley, Christensen’s attorney, said the letter references the city of Decatur’s investigation of Jacobs-Walton’s conduct. Buckley said he got the investigative report via an open records request.

“We only recently secured this document, so it’s not something that we had at the get-go,” Buckley said. “It’s new evidence.”

Decaturish received a copy of the report during the Sept. 30 meeting. The report shows that the city began its investigation in February 2020 after a human resources generalist resigned and alleged mistreatment by Jacobs-Walton. The investigation found that Jacobs-Walton had used “two racial slurs” to describe an individual and a “homophobic slur” to describe an individual. She also called people “stupid” and “dumb” and “would spray down her office after blue collar employees came to meet with her.” The report is heavily redacted, leaving out most of the specifics of what was said and who she was referring to when she made her comments.

In a statement to Decaturish, de Castro said the city is committed to diversity and inclusion.

“You well know that the city of Decatur is committed to the values of equity, inclusion and diversity,” de Castro said. “As an employer and a community, we uphold the importance of creating a community and a workplace that is welcoming to all. The city has hired, retained and promoted a number of LGBTQ+ identifying employees into leadership roles. In 2013, the city adopted a Domestic Partnership program at a time when the State of Georgia did not recognize domestic partnerships. In 2019, Decatur became the sixth Georgia city to adopt a Non-Discrimination Ordinance that prohibits all forms of discrimination including discrimination based on actual or perceived race, color, religion, national origin, ancestry, sex, sexual orientation, gender identity, age, disability, marital status, familial status or veteran/military status of all persons who live in, work in or visit the city of Decatur.”