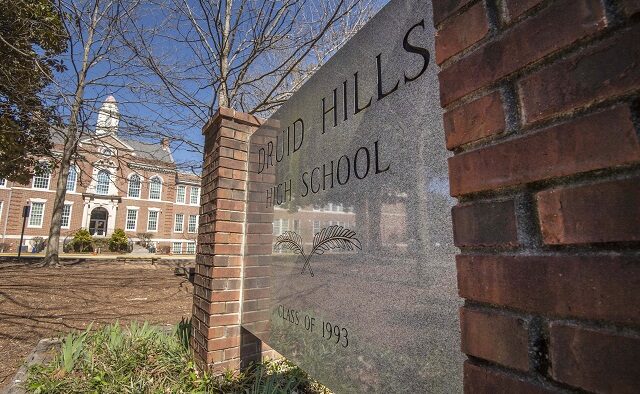 Editor’s note: This story originally appeared in The District, a newsletter for Decaturish subscribers. To become a subscriber, visit supportmylocalnews.com

DeKalb County, GA — DeKalb County School District reports completing between 72% and 74% of its to-do list, but some schools are still in need of basic repairs.

Across the district, staff and vendors have completed 3,573 out of 4,974 maintenance items to date, Interim Superintendent Dr. Vasanne Tinsley said at the Sept. 12 board meeting.

Druid Hills High School, which came under scrutiny after students published video footage of substandard and unhealthy conditions in the building, is still facing drainage issues – among other concerns.

DHHS was all over the news this past spring, catching the eye of the Georgia Department of Education.

GaDOE developed a plan focused largely on DHHS, said Tinsley, but it became “increasingly apparent that there were needs in schools across our district that deserved attention. To address the concerns, a facilities task force was implemented.”

Since May, the Georgia Department of Education (GaDOE) has made five site visits to check on the progress of maintenance repairs at DHHS.

Parent volunteers gathered at DHHS one day in late July to remove ivy from trees, paint, and plant flowers. It had rained the night before. What volunteers discovered was standing water in dry wells at the building’s foundation.

“We have visited other schools because we wanted to receive some insight on the maintenance issues of the schools across the district,” said GaDOE Program Manager Dr. Tanzy Kilcrease.

The number of repairs – which include HVAC issues, flooring, plumbing, roofing, glass and glazing, carpentry, asphalt work, masonry, and general custodial – is a moving target as repairs are constantly being reported and addressed.

Tinsley reported that despite custodial shortages during the summer, the district “provided 33 schools with additional support for summer cleaning.”

Tinsley’s DCSD Facilities Progress Update shows some districts have a longer to-do list than others. For example, Region 1 projects are 59% complete while Region 3 projects are 91% complete.

At Ashford Park Elementary School in Brookhaven, parents reported a dangerous hole in the floor of one of the classroom trailers used for fourth-grade German-language immersion students. The hole had been there for more than a month.

An email from a parent read, “We are hoping that if parents send a picture and a message reminding the administration about this situation. It will hopefully get fixed sooner rather than later.”

Ashford Park, a Region 1 school in the Chamblee cluster, is so overcrowded that the entire fourth and fifth-grade classes are held in trailers. A report published in March by DCSD shows Ashford Park scored a 56.5% on educational sustainability.

“It has been 4 weeks and still has yet to be fixed. There are now ants crawling in through the hole. Not only is this hole dangerous, but it is taking up much needed space in an already crowded classroom,” the email read.

District officials concede they are not finished making all the necessary repairs on its to-do list.

“There remains work to be done,” Tinsley said. “There are still concerns in a few of our schools that will take more than a few months to address. And while we continue to address these remaining issues on the list that have been developed by the schools, we will also address those that present themselves.”