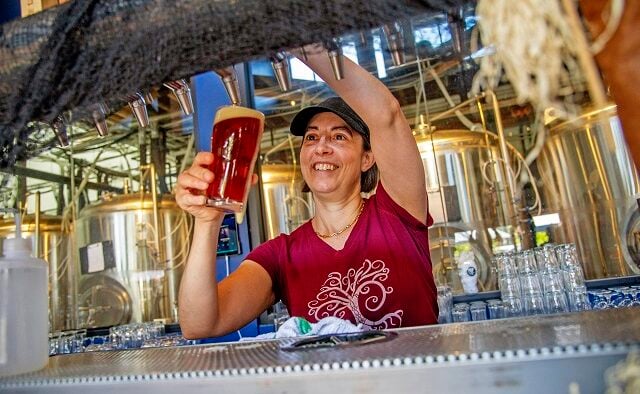 The Lost Druid Brewery CEO and co-founder Stacia Familo-Hopek pours a beer for a customer during the first annual AvondALE Day in Avondale Estates on Saturday, Oct. 23. Photo by Dean Hesse.
Share

Avondale Estates, GA — Tickets are on sale now for Day League’s second annual Make A Difference Beer Bash, a fall fundraiser on Oct. 6 from 6 to 8 p.m., located at The Lost Druid in Avondale Estates.

Day League, a sexual assault care and prevention center in Decatur, has been serving DeKalb County since 1989. Since the start of the COVID-19 pandemic, though, they’ve been limited in the fundraising they’ve been able to do.

Another thing COVID hasn’t stopped is sexual assault cases. But the work of Day League continues to prove a helpful alternative to hospital visits, not only because of access to treatment but also to transportation. If any clients need a ride back and forth to the center, they will provide those services.

“When people go to the hospitals, they are being triaged among other people who have, in some cases, life-threatening medical conditions, or are seeking treatment for COVID,” Miller said. “And hospitals have been totally overwhelmed, in terms of emergency rooms.”

Waiting room time isn’t the only factor, though. A patient seeking a rape kit must have one administered within five days of the assault. And most hospitals and crisis centers won’t accept patients until they’ve filed a police report.

But Day League does.

“We’re very client focused, which also means we’re seeing people who will not cooperate with police investigations or go forth, in terms of any litigation,” Miller said.

The effect of the Supreme Court’s decision to overturn Roe v. Wade

The pandemic isn’t the only thing that’s changed some of Day League’s protocols. Miller said that the recent Supreme Court decision to overturn Roe v. Wade has altered the counseling services they’ll provide.

“In the past, we have seen people come to us who need a referral and services around pregnancies, allegedly from rape scenarios,” she said.

“Right now, because of the Georgia law, we’re not doing any counseling around abortion because the law is so specific and affects women so early. What we would do in that scenario, depending on what the client wants to do, is refer them to another program.”

“Most of the people we’ve seen for pregnancy related issues have come in way past being six weeks pregnant, and they’re not even aware of their pregnancy until post six weeks,” Phyllis said. “I mean, I’ve had three kids, and I didn’t know I was pregnant within six weeks. I can say that from my own experience, so I’m looking at so many women who will be affected by this law, who may not honestly even know they’re pregnant, post six weeks.”

And looking to the future, Phyllis said that they’re worried about next steps.

“As the governor said, this was only the beginning, and that the next step would be an attack on birth control pills and prophylaxis medications,” Miller said. “Also, some obstetric clinics around the state are already closing because the doctors and staff are afraid of prosecution if they proceed with helping women.”

Fundraising for Day League at The Lost Druid

Stacia Familo-Hopek, CEO and co-founder of The Lost Druid, began working with Day League in 2021 after visiting with one of the staff in the brewery’s taproom.

“While I was an undergrad at the University of South Florida, I was a volunteer on a campus crisis line,” Familo-Hopek said. “Since that volunteer experience, I’ve felt an appreciation for those that are willing to reach out and help others through very traumatic experiences. The work that they do is critically important, and I was totally onboard with helping them to raise funds to further their mission.”

And in light of the Supreme Court decision, helping Day League fundraise again this year is on her list of priorities.

“As a woman in a male dominated industry, I feel a responsibility to do something to support those that are harmed by others,” Familo-Hopek said. “This is not a political issue to me, it’s a personal one. Day League plays a pivotal role in helping victims with the support and counseling that they need at a critical time. How far our elected officials will go to regulate decisions about a woman’s body, health and reproductive decisions is unclear. What is clear is that we need organizations like Day League to support those who have been victimized by another, so they can receive the care and support they need to make the right decisions for themselves.”

Familo-Hopek added that The Lost Druid is a welcoming space for Day League to raise awareness about their programs and mission, and those interested in showing support can become an event sponsor or purchase tickets here.

Tickets include craft beer, hard seltzers and food, along with the opportunity to connect with others who are supporting Day League. There will also be a raffle, with raffle tickets on sale now, too.

To learn more about Day League, visit their website.