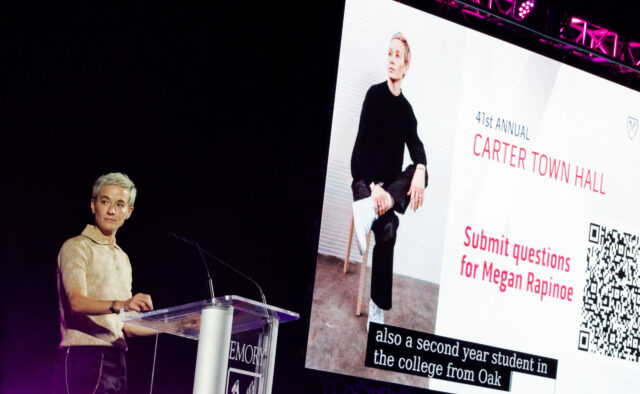 Atlanta, GA — Emory University first year students gathered on campus on Sept. 19 for Carter Town Hall. United States Women’s National Team member Megan Rapinoe delivered the keynote address, where she encouraged students to be their full selves and give others the space to do the same.

“I feel like the first year of college is really the time to give yourself permission to figure out who you are,” Rapinoe said. “Not just the things you like, or maybe the people you like, but really what you’re interested in and how you want to show up in the world.”

The Carter Town Hall started in 1982 when former President Jimmy Carter became a distinguished professor at Emory University. For 38 years in a row, Carter was the keynote speaker offering his wisdom and wit in response to student questions, according to a press release.

Rapinoe is one of the most decorated athletes in women’s soccer and has been a vocal leader on and off the field. She helped lead the Women’s National Team in winning the 2019 Women’s World Cup and took home the tournament’s top honors for being the top scorer and best player in the World Cup.

During her keynote address, Rapinoe said college is an opportunity where students have somewhat of a safety net, but are also put in situations where they have to ask themselves questions.

Throughout her soccer career, Rapinoe has learned that the most successful teams aren’t made up of people who sacrifice everything to be on their team.

When people show up as their whole selves, that’s where the magic happens.

“I think this really showed up for me in our fight for equal pay,” Rapinoe said.

The fight for equal pay goes back to a federal equal pay complaint filed by five high-profile players – Carli Lloyd, Hope Solo, Alex Morgan, Megan Rapinoe and Becky Sauerbrunn – in 2016. The players said each member of the women’s team earned thousands of dollars less than the men at almost every level of competition, according to NPR.

Rapinoe is proud of the team for coming together during the fight for equal pay, which she said was a necessity of their lives at the time, a necessity of doing something that they truly believed in, and it was a situation where the team felt there was no other option.

She later added that she’s most proud of how the team has focused on their off-field fights, like racial justice and equal pay.

“I think this team has always done such an incredible job of using probably our most special talent, which is on the field and how successful we are and how successful we’ve been for such a long time, to leverage that to do good in the world,” Rapinoe said. “I think one of the most important things is achieving equal pay finally and knowing that no one else, no other woman coming up in this federation, playing this sport in this country will ever have to deal with what we did – and knowing that we have it so much better than those who came before us.”

She added that the only reason the players were able to accomplish this much is because they were standing on the shoulders of many other women. 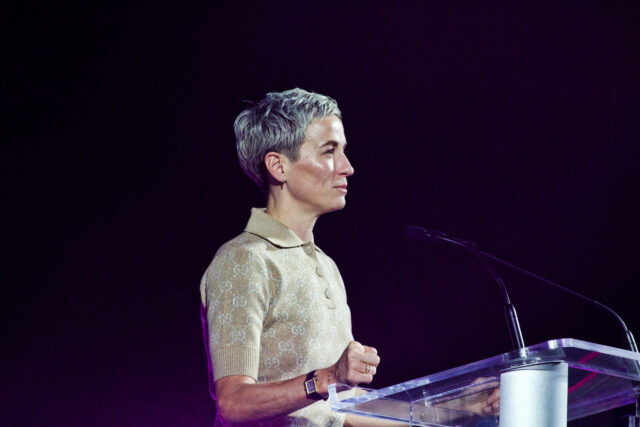 Rapinoe also took a few other questions submitted by students, including what is the best piece of life advice she has received and tips for overcoming burnout.

When it comes to overcoming burnout, she encouraged students to take breaks, and also challenge themselves in different ways.

While answering a student question about the struggles of progress, Rapinoe said that during the fight for equal pay, the team learned that they weren’t too small to make a change.

“I feel like our group of players, and really the entire history of the Women’s National Team, has that thread of rebellion or that self-belief in us that you know deep down in your gut and…trusting that intuition in the face of a lot of the existing structures in the world telling you otherwise, that you can do the insurmountable,” she said. “You can do the unthinkable.”