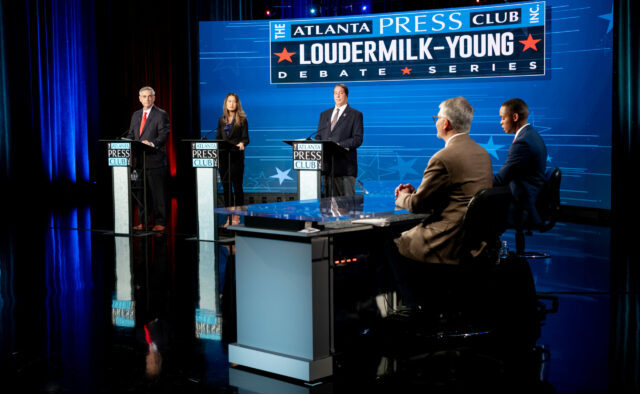 The series included debates between candidates running for lieutenant governor and secretary of state. Here are some highlights from those debates:

Candidates discussed eliminating the state income tax, gas tax or other taxes, and what items should be cut from the state budget to make up for the lost revenue.

Graham said libertarians believe in a culture of consent. If value is being added for something, then people would pay for it, he added.

“We don’t believe that you have to take money from people in the form of taxes to pay for the goods and services that are provided by the government today,” Graham said. “I think you can cut things from the budget and that doesn’t necessarily cut things from society. We just need to find better ways to pay for it in a consensual manner.”

For example, when it comes to public education, Graham said that instead of paying property taxes, one would pay for a school directly.

“There’s incredible demand for public schools,” he said. “There’s no reason to believe that another system besides taking money from people via property taxes usually would not be feasible. I want to send my kid to school, I would pay for it.”

Bailey, responding to a question about forms of gambling he’d put on the ballot, said he supports casino gambling, sports betting and horse betting.

“These are things that folks in Georgia are already doing,” Bailey said. “The people of Georgia though are not getting any tax revenues that can go into our schools to help pay our teachers more, to help reduce class sizes, to restore hope, to do all the things we need to do to make our education system a 21st century education system.”

He’d like to see revenue gained from gambling go toward education.

During the legislative session in 2021, the “Election Integrity Act of 2021” was passed. Senate Bill 202 made changes to absentee voting, early voting, vote counting and local elections offices. While Jones wasn’t a sponsor of the bill, he did vote to pass the legislation.

“I support the 202 bill, and we’ve come to realize that it’s actually working. People thought it was going to restrict voting. This past primary in [2022] we had record turnout in the primary. We have three weeks of early voting. We have a situation where we have weekend votes,” Jones said.

Metz, a libertarian candidate in the race, has expressed a desire to shift to paper ballots and hand counting rather than using optical scanner machines. He said this would increase voter confidence “because humans generally have a tendency to want to be honest.”

“We already have ballot marking devices that actually do accurately reflect voter’s intent for their candidates. There’s no reason that we can’t hand count the paper ballots,” Metz said.

He added that even if optical scanners were used to look at the votes, “we’d still have a much better idea of what the accurate count of the ballots were or is. Because once you put things into a computer system, your votes become a fractionalized, manipulated data point, not an actual vote,” Metz said.

After the 2020 election, election workers faced threats, harassment and lawsuits, which made those positions less desirable. Nguyen said the Secretary of State’s office needs a comprehensive plan to support local elections.

“It’s important to also understand that after the passage of Senate Bill 202, the workload on our local election boards and our election workers has increased while the funding has decreased,” she said. “What we’re looking at is more and more people are leaving because they don’t have the adequate resources to administer free and fair elections in all 159 counties, and poll workers are being threatened and harassed.”

She added a comprehensive plan is needed to make sure local election boards are well-resourced and well-equipped.

The state has seen over 65,000 voter challenges, many based on information that voters might have moved to another state. This was enhanced under Georgia’s new voting law, which doesn’t place a limit on challenges.

“It is in everyone’s interest, and I think everyone would share that same interest, that we have accurate voter rolls,” Raffensperger said. “But that said, frivolous challenges just gum up the work and if I was living in one location for the last 10 or 20 years, I would be offended also. I think that there needs to be some reform in the next session.”

He added that voters live in a dynamic and mobile society, so it’s important to update the voter rolls.

“That’s why I secured authority from the General Assembly to join ERIC, the Electronic Registration Information Center, so we can update the voter rolls objectively,” Raffensperger said. “When you move from another state to Georgia, we let that member state of ERIC know that, so we can have updated voter rolls. I also think we should do annual list maintenance for the counties.”