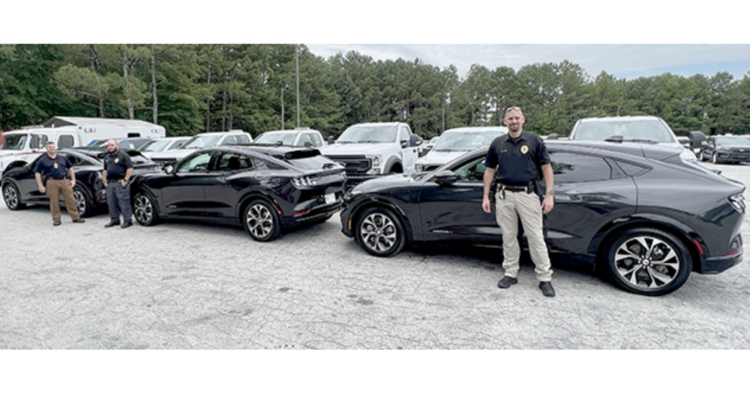 Avondale Estates, GA — The Avondale Estates City Commission, at its Oct. 12 meeting, approved the purchase of electric charging stations for the police department in the rear of the city hall parking lot.

A single post 1.5-kilowatt dual charger is needed to support the police department’s three electric vehicles for daytime charging. The city will contract with Indigo Energy for $11,485 to install the charger.

Indigo Energy was the only company to quote the installation at the rear of the parking lot, which was the city’s preferred location. Indigo’s bid was the lowest bid.

In July, the board approved the purchase of nine police vehicles, including three electric vehicles.

Police Chief Harry Hess’ proposal included the purchase of six 2022 Ford Utility Police Interceptor vehicles as patrol cars, and three Ford Mustang Mach-E’s for administrative use. The Mach-E’s would be issued to the police chief, the CID sergeant and the deputy police chief.

The city has installed a charging station at the police chief’s home and is working to install chargers at the homes of the two other officers who have an electric vehicle.

“However, as we discussed when we were making this decision, we need to install some chargers here at city hall, rapid chargers that would allow us to charge the vehicles in less time than the chargers do at the home,” Bryant previously said.

– In other business, the city commission approved a contract with Dewberry for $128,150 to produce a hydrologic stormwater model for the city. The contract amount includes a 10% contingency above the bid amount to train the city staff to work with the model.

“This model will be used as a decision-making tool to address flooding and infrastructure concerns,” Bryant said.

When the city developed its stormwater priority plan, Brown and Caldwell developed five concept plans and the third, fourth and fifth concept plans require the city to first go through a hydrological modeling process to move forward with the projects, Bryant said at the Sept. 28 work session.

– During the work session, the board discussed a contract with DeKalb County for the service delivery strategy to determine what services the city and the county will provide. The proposed strategy for Avondale Estates is not going to change, Bryant said.

During the discussion, Mayor Pro Tem Brian Fisher wondered about bringing 911 and dispatch services in-house, although Hess said it would be an expensive endeavor.

“It would be double public safety…especially on initial start up,” Hess said. “Now, if you want to explore an option to move away from DeKalb County, there is a very good avenue and potential with city of Decatur.”

Decatur has its own dispatch and 911 system. The cities are in the process of signing and executing a memorandum of understanding for Decatur to take over Avondale’s after hours, holidays, weekends, and warrants when they come in. The MOU will be executed within the next week or so, Hess said.

He added that Decatur Police Chief Scott Richards has brought up the topic in recent conversations.

“Their main concern is with their current 911 staffing, was the burden on them or would they need to increase their staff and what the cost of that would be long term,” Hess said. “I think they’re interested because that’s going to benefit their city and their 911 and their public safety also, kind of build that robust infrastructure.”

The city commission took no formal action related to 911 and dispatch services, but the commissioners agreed they wanted to learn more. If the city were to contract with Decatur, the transition would take about one year, Hess said.