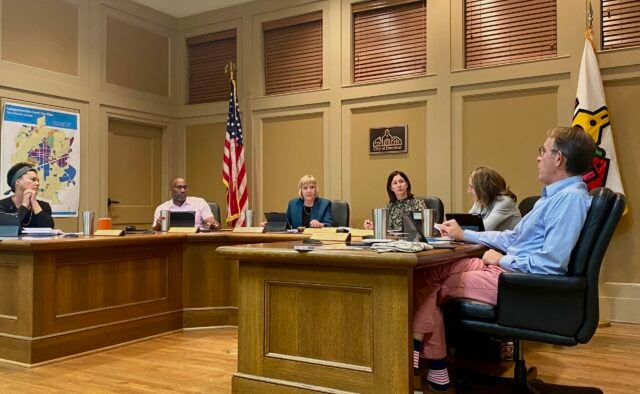 The Decatur City Commission met on Monday, Oct. 3, at City Hall to discuss adding gender-neutral pronouns in the city's charter, as well as redistricting. Photo by Zoe Seiler.
Share

Decatur, GA — The Decatur City Commission, at its Oct. 3 meeting, approved one of two votes to substitute gender-neutral pronouns in the city’s charter.

Since this is a change to the city’s charter, the city commission has to approve the ordinance twice.

“Because the amendments to the Charter are being asked to be adopted by home rule, the Charter amendment must be adopted at two regular consecutive meetings,” City Clerk Meredith Roark said. “The second reading of the ordinance and final adoption is recommended for inclusion on the Oct. 17 agenda.”

The city contracted with Municode in March 2021 to review Decatur’s code of ordinances for use of gendered language and provide recommended modifications “as part of our efforts to support equity and inclusion in the community,” Roark said.

Gendered language was found in the city’s charter, the general code sections and the unified development ordinance. There were 20 sections in the charter that had some gendered language, Roark said.

“An example of gendered language would be taking in charter [section] 3.10, the city commissioners, right now, shall be elected by receiving a plurality of votes cast in an election district in which he or she qualified, and we are looking to change that to something such as just city commissioner, instead of using he or she,” Roark said.

She added that the changes seek to modify all masculine and feminine language to gender-neutral language.

After meeting with the State Legislative and Congressional Reapportionment Office, the city has proposed districts with a total deviation of 0.16%, or a difference of 20 people.

“The proposed district extends District 2 east along existing boundaries of East Ponce de Leon Avenue to the north and East Howard Avenue on the south from North McDonough Street to North Candler Street,” Arnold said. “By doing this, the District 1 population would be reduced by 701 for a total of 12,474 and the District 2 population would increase by 701, getting us to 12,454.”

The area that would be added to District 2 includes the Town Square Condos, Philips Presbyterian Tower, the Arlo and some housing on East Maple and North Candler Street.

The redistricting proposal is also a change to the city’s charter. The city commission will first adopt the amended maps on Nov. 7 and the final adoption of the districts will be on Nov. 21.

The adoption of the district’s will only impact the city commission districts. The Decatur School Board will go through the process as well, but its districts have to be approved by the Georgia General Assembly. Redistricting the voting districts also will not impact City Schools of Decatur’s attendance zones.