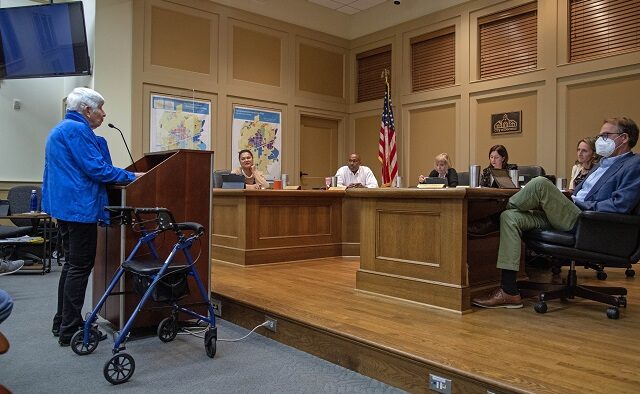 The hearing occurred during the Decatur City Commission’s regular meeting.

About 80 residents crowded into City Hall to speak in favor of and against the proposals. Residents also urged the city commission to consider duplexes, triplexes, and quadplexes on a case-by-case basis. A few additionally suggested the proposals be a referendum for voters to consider.

Allowing duplexes, triplexes, and quadplexes in city neighborhoods was a recommendation of the Affordable Housing Task Force.

1. To allow construction of and conversion to duplexes (2-units) and walk up flats (3-4 units) in R-50, R-60, R-85, and RS-17 zoning districts by limited use, and to comply with same size and setback requirements of detached homes.

2. To require parking compliance of 1 space per dwelling unit – as is currently required for detached homes – and to allow up to 50% of parking to for duplexes (2-units) and walk up flats (3-4 units) to be on-street parking, so long as frontage space meets requirements, and on-street parking is allowed.

This type of housing would have to conform to the size limitations of single family homes. 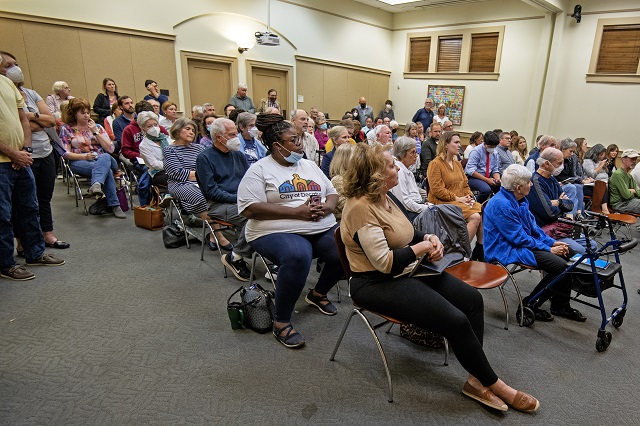 Around 80 people in attendance listen to public comments during the Decatur City Commission meeting on Monday, Oct. 17, 2022. Photo by Dean Hesse.

The city commission did not vote on the proposals on Monday night. The commission will also discuss the missing middle housing recommendations on Jan. 17 and Feb. 6 at 7:30 p.m. All the meetings will take place at Decatur City Hall, 509 N. McDonough Street.

“[House Bill]1405 amended the Zoning Procedures Law and states that for this type of zoning decision at least [two] public hearings must be held and the public hearings ‘shall be held at least three months and not more than nine months prior to the date of final action on the zoning decision,'” City Manager Andrea Arnold told Decaturish. “The two public hearing dates are October 11 and October 17, 2022.  Also, the zoning decision must be adopted at [two] meetings. In order to comply with these requirements, the dates to consider the proposed text amendments are January 17, 2023, and February 6, 2023.”

Last week, after meeting more than five hours, the planning commission voted to recommend denial of the city’s application due to deficiencies the commission members saw in the current proposal.

Many residents who spoke on Monday were concerned about how a blanket zoning change could impact the city and the neighborhoods.

“How do we know that a broad zoning change without any other stipulations will not create more developer-driven interests within our city,” resident Liz Post asked the city commission. “Developers have shown their bottom line, and it’s a personal return on their investment, not the city of Decatur.”

She also asked if the community wants the city to be filled with overpriced multifamily units and added it negates affordable housing.

“How can we have a city built on community and inclusion when taxpayers are speaking up and saying they don’t feel that there’s total transparency within the current proposal,” Post said. “One of the many reasons that put Decatur in the current position of high home values is developers tearing down affordable homes and erecting new homes well over $1 million.”

“While units in a multiple resident unit are of course likely to rent for less than a single family home, it’s nearly impossible for me to imagine that a two-bedroom duplex, triplex or quadplex, at least one that meets the safety, quality and building standards that we would expect, is going to rent in the city of Decatur for $1,300 a month or less,” speaker Carol Tangum said.

“This that we are discussing, by its definition, is not an affordable housing initiative. It is a housing diversity issue,” Mayer said.

The city is not looking at controlling this housing when it comes to mandatory inclusionary zoning and ensuring affordability.

“We are not talking about creating quadplexes, or even duplexes for that matter, that we are able to govern and maintain affordability on,” Mayer said. “But what we are talking about is an option for someone to own one unit in a four-unit building that’s the same size as a single-family house that is currently being built when someone buys a smaller home and tears it down.” 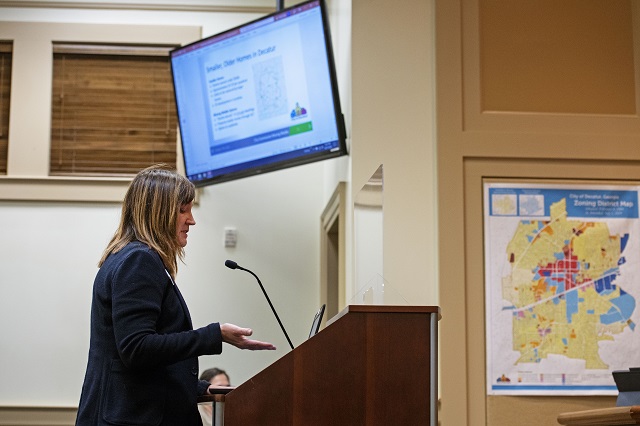 City Planner Kristin Allin told Decaturish that the missing middles proposals are being presented a “Diversity of Housing for a Diversity of People” policy, but it also helps with flexibility for affordable homes that might be provided.

“It would be great for our efforts to allow small, single-family homes as well as multi-units that are affordable — while also allowing market-rate (unsubsidized) options at different price points,” Allin said. “We recognize that the single-family home is the only housing type allowed on the majority of land in the city of Decatur. This does not allow for flexibility in size/type/price of units, nor give people the ability to subdivide a home if they desire.”

Resident Catherine Hodges also worried that the city would be giving up control with the zoning changes.

“We will have no control over corporate rental properties scattered throughout and the problems that come with absentee landlords and Airbinbs,” Hodges said. “I honestly do not see any reason to not just handles these rezonings on a case-by-case basis.”

During the public hearing, some residents spoke in favor of the proposals. Tim Sass said the amendments are “a reasonable policy approach that will provide greater opportunity for middle income individuals and families to reside in our community.”

“I believe the proposed changes will not be a panacea for the dwindling economic diversity in our city, but nor with they wreak havoc on our neighborhoods,” he added.

Decatur School Board member Hans Utz also spoke, supporting re-allowing missing middle housing. He spoke on behalf of himself and not on behalf of the school board.

Utz suggested the city commission address the issue of affordability through permitting.

“We really do face calamity. I don’t use that word unreasonably. I moved to the city 15 years ago because of its socio-economic diversity, its cultural diversity and its racial diversity. All three of those are under massive, sustained threats,” Utz said.

He added that a zoning change alone isn’t going to fix that.

“I believe you have the opportunity to use the permitting to allow for higher density, so long as it is affordable,” Utz said. “If a developer is bringing forward ideas that do not meet affordability standards, don’t give them the permit.” 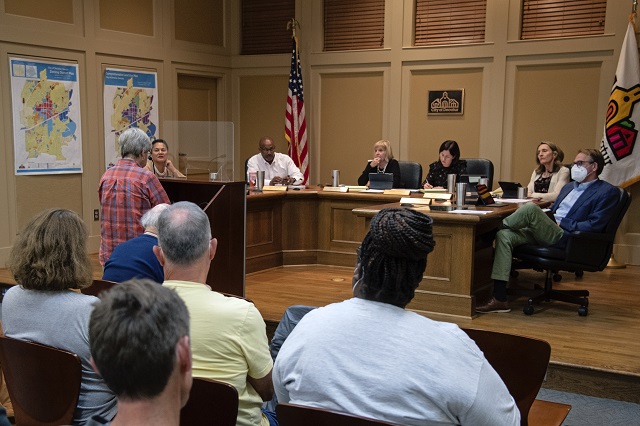 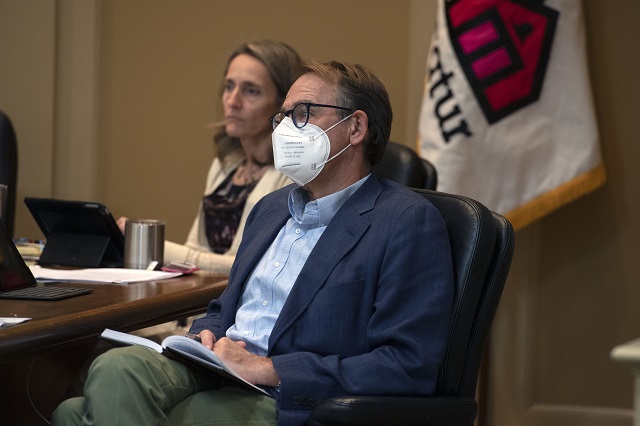 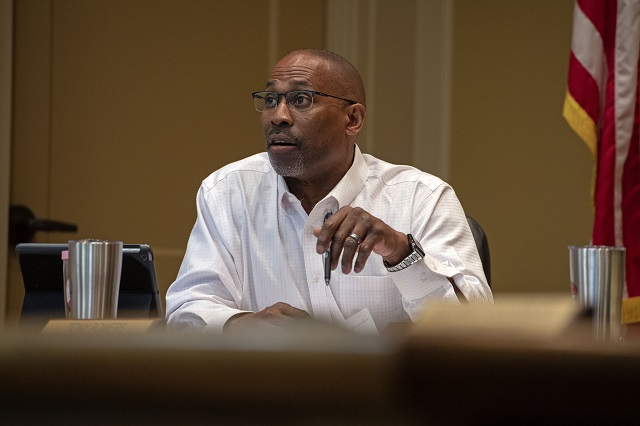