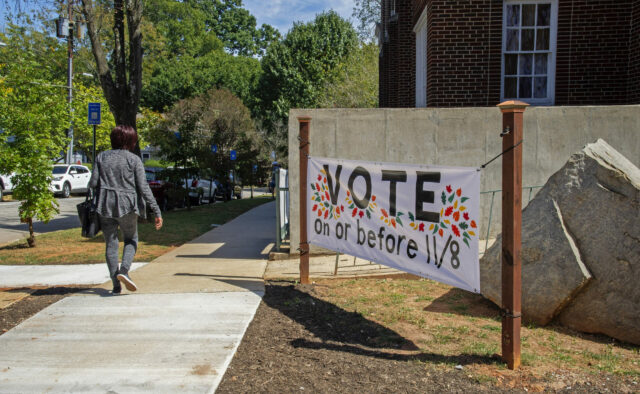 DeKalb County, GA — Thousands of DeKalb County voters have made it to the polls during the first week of early voting. So far, 66,673 ballots have been cast during in-person early voting for the midterm election.

“We are excited to see a historic number of voters take full advantage of early voting here in Georgia,” said DeKalb Voter Registration and Elections Executive Director Keisha Smith. “When we look at the massive voter turnout, it appears we are on track to outpace the 2018 midterm election early voting numbers, which is very exciting to see.”

There are still two weeks of early voting left. Voters have until Nov. 4 to participate in advanced voting. Election Day is Nov. 8.

Voters are now required to provide either a Georgia driver’s license or Georgia ID card number or a copy of another for of ID when applying for an absentee ballot. For more information about ID requirements, click here.

Absentee ballots can be mailed to the Board of Registrars or dropped off at a drop box locations during early voting. To view the list of drop box locations, visit the DeKalb Voter Registration and Elections website and click on the “absentee information” tab.

To view the list of early voting, visit the DeKalb Voter Registration and Elections website and click on the “Early Voting is Available in DeKalb County” tab.

After early voting ends, absentee ballots can still be delivered by hand to the front desk of the Voter Registration and Elections Office weekdays from 8 a.m. to 4:30 p.m. or until 7 p.m. on Election Day.

Democratic candidate for governor Stacey Abrams said during a press conference on Oct. 24 that the turnout reflects the energy her campaign is seeing.

“We know that across the state there is incredible enthusiasm, but there’s also a sense of urgency,” Abrams said.

Abrams campaign manager, Lauren Groh-Wargo, said that over 838,000 people have voted in the midterm election by absentee ballots and in-person early voting.

“That’s about half of the total voters in [2020],” Groh-Wargo said. “The big thing we were seeing is that in early vote in person we were, over the course of the week, seeing often individual days that were higher or about the same level as [2020]. So overall, of the early votes in person cast, we’re at 89% of early votes in person compared to [2020]. In 2018, about half as many people had voted early at this point, so we’re seeing very strong in person turnout.”

She added that the impact of Senate Bill 202 has mainly been seen in vote-by-mail turnout.