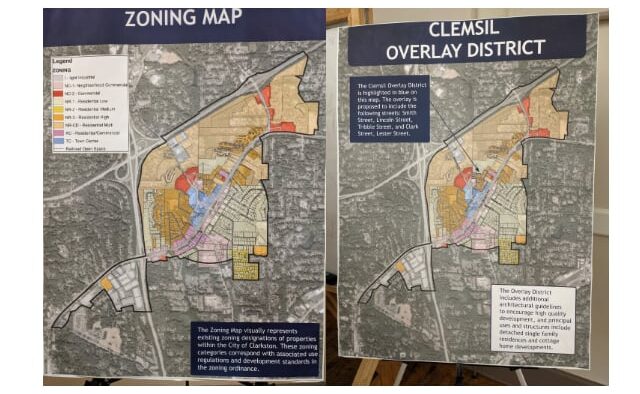 Zoning maps presented at a community meeting in Clarkston on Nov. 16. One is a map of zones and the other shows the proposal Clemsil overlay, meant to preserve a historic Black neighborhood. Photo by Sara Amis
Share

Clarkston, GA — Clarkston held the last of a planned series of community meetings to discuss a rewrite of the city’s zoning code at the Clarkston Community Center on Nov. 16.

Mayor Beverly Burks opened the meeting by thanking attendees for coming. “The only way we’re going to make real change is if we have the community involved. Your willingness to come out in the cold will make a difference in our community for years to come,” said Burks.

The most contentious part of the rewrite was the increasing of density in the city. Those changes include allowing apartments in the downtown center district as part of a revitalization plan and allowing live/work developments and townhomes in the NR-2 zone, which includes the neighborhood south of McLaren Drive and east of Market Street.

The zoning rewrite process was led by Pond & Company, an architecture, engineering, planning and construction firm based in Peachtree Corners. Sycamore Consulting assisted with the community engagement process.

Rosie Mafe, a planner at Pond & Company, said that previous community meetings informed decisions made during the rewrite. Based on feedback from the community, the zoning code was reorganized to make it more user-friendly and easier to understand. A use table was added that defines permitted uses in each zone.

Other priorities included walkability and pedestrian safety, multi-modal transportation and connectivity, and a variety of housing for all incomes.

Protection of historic neighborhoods was also a priority, which prompted the creation of the Clemsil overlay district, including additional architectural guidelines. Clemsil is a historic Black community that includes Smith Street, Lincoln Street, Tribble Street, Clark Street, and Lester Street.

In addition to more apartments and townhomes, additional changes that would increase density and increase the availability of lower-cost housing are allowing more types of accessory dwellings such as basement or attic apartments as well as the separate buildings currently allowed, smaller lot sizes, and cottages or tiny houses.

She went on to say that Clarkston’s density is quite high for the area, 8,000 people per square mile. “If there’s a deficiency in Clarkston, it’s not multifamily,” said Hood.

“Most of Atlanta is in a housing crisis, and Clarkston is not an exception,” said Carroll.  He stated that surrounding apartment complexes are 99% full and that during the most recent influx of Afghan refugees, families had to stay with friends or in extended stay hotels for months on end.

“Never mind the price, apartments just weren’t available,” said Carroll. He went on to say that if Clarkston wants to continue being a welcoming city, it needs more affordable housing options.

“If we want to keep resettling refugees, we have to increase housing stock. That’s just a fact,” said Carroll.

A final draft of the zoning rewrite will be presented to the Clarkston City Council at their next regular meeting.