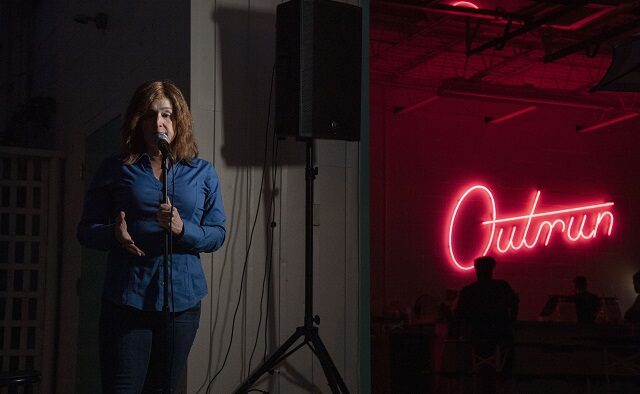 Editor’s note: This story first ran in the Nov. 1 Decaturish e-edition. To receive the e-edition, become a paying subscriber of Decaturish by visiting supportyourlocalnews.com

At the Outrun Brewery, the Dirty South Comedy show, hosted by Matt Tamburrino, blares over the speakers as the sun sets. Nearby, a 90-foot-tall granite carving of three confederate icons on horseback looms, the silent, stoic faces unaware of what fun comedians are having at their expense.

Tamburrino introduces his next guest. She’s new to the game, he notes, but she’s good. Her natural sense of timing and efficient deadpan is enough to make any aspiring comedian jealous.

“It’s annoying how hilarious she is,” Tamburrino says. “I hate it, but I love her. You’re going to love her, too.”

Vandy Beth Glenn takes the stage. She has red shoulder-length hair and wears a blue button-up shirt. Behind her, the neon “Outrun” sign glows a shade of 80s arcade pink. Her voice is soft, almost monotone. It’d be fair to wonder if she’s ever yelled at anyone.

“It’s the first time I’ve ever performed outside or in Stone Mountain,” she said. “It’s kind of weird. I feel like I’m performing for the guys on the carving. They’re going to be very confused by some of what they hear tonight.”

You may have heard Glenn’s name before. She was the plaintiff in Glenn v. Brumby, a federal lawsuit. She worked as a legislative editor for the Georgia General Assembly. When she told her boss, Sewell Brumby, that she was transgender, he fired her. Glenn’s lawsuit accused Brumby of running afoul of the U.S. constitution’s Equal Protection Clause. She prevailed, and the verdict has been used to defend the rights of transgender individuals around the country.

But her love of comedy predates this, back to the days when she planned for life after leaving the U.S. Navy. After being discharged while stationed in Hawaii, she read a book on Stand-up Comedy by Judy Carter and developed material she performed at a comedy club in Honolulu.

“It was very successful,” Glenn said during a recent interview at Waller’s Coffee Shop in Greater Decatur. “The owner said she liked my act, and more specifically how I drew my humor from some local culture of living in Hawaii.”

She wanted to keep at it, but regular life got in the way, and she put down the mic. She didn’t pick it up again until 2021 when a comedy show at Heck House in Greater Decatur rekindled her interest.

“That just kind of put the itch back in my brain,” Glenn said. “So, I started coming to standup shows they’d begun doing here at Wallers and enjoying them and getting a feel for what comedy is like these days.”

Comedy, these days, is a minefield. Whether it’s Will Smith slapping Chris Rock across the face for making fun of his wife Jada Pinkett Smith’s hair or Dave Chappelle riling people up by taking potshots at the transgender community, there’s now a contentious debate about what is and what is not off-limits for comedians

“He seems to me like someone who is desperately trying to cling to relevance,” Glenn said. “And I’m unpersuaded by his claim that he had a trans friend therefore he can’t be transphobic, which sounds a lot like the bigots who say, ‘I can’t be racist, I have a Black friend.’”

“I am trans, and there is some trans material in my act,” Glenn said. “I found, by and large, there’s a presumption about audiences that they’re on your side.”

Glenn tested her own presumptions in July when she contacted Tamburrino after she heard about a show at the American Legion Post in Sugar Hill, GA.

Tamburrino had never seen her act before.

“She messaged me on Facebook,” he recalled. “She said, ‘I’m Vandy. I started doing comedy recently. I’m a Navy veteran, and I’d love to do the American Legion show, but I want to let you know that I’m a trans woman and I completely understand if that wouldn’t be cool up there.’ That’s how she put it.”

She wondered how she’d be received by people she presumed were conservative Republicans. They might be a tougher audience than the confederate generals carved onto the side of Stone Mountain.

Booking Glenn was an easy decision for Tamburrino.

“And I immediately messaged her back. I said, ‘Yeah, you’re on the show,’ mostly for her being a veteran,” Tamburrino said. “’I guess we’re going to find out together if that’s OK or not.’” 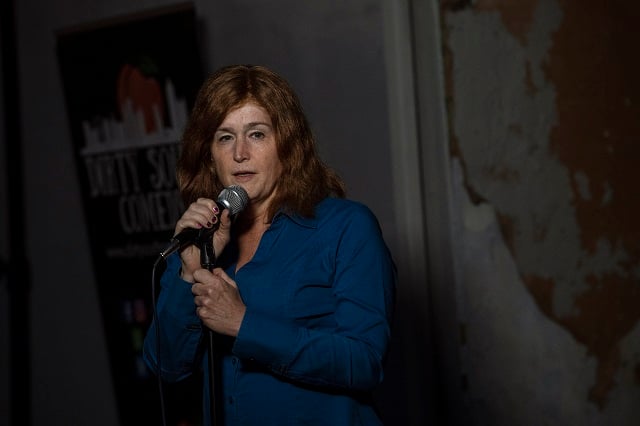 Glenn said it was her biggest audience yet, a room of 150 veterans.

Her story about being trans is a bit of a buried lead in her act, something that begins as an almost casual mention.

“My gender reveal party was a little late,” Glenn says during her set in Stone Mountain. “It was only like 15 years ago. But my parents were surprised. It’s a girl, mom and dad. Yay. Yeah, they didn’t want to finish their pink cake. There were lots of fireworks though. So yes, I am transgender. I know we’ve been in the news a lot lately.”

Glenn assures her audience that she’s not trying to join any swim teams.

Being trans isn’t easy “in lots of ways,” she says, but she assumed when she transitioned, she’d be upgrading to a better restroom.

“But you know, women’s rooms, you’d think they would be terrific,” she says. “There’s always a line to get in. Sometimes, when you walk past them, there’s a door open. You can see there’s a couch, a waiting room. Sometimes a floral scent wafts out. Nice.”

But when she discovered the toilets …

“That’s when I learned about hovering,” Glenn says. “Women don’t sit on the toilets in restrooms. We crouch down and pisssh like a helicopter fighting a forest fire. It’s horrifying. Yes, men are animals. We all know this, but at least they aim for the urinal cake. They pride themselves on it. If they printed numbers on the urinal cakes, men would compare their scores with each other.”

When she finished her set at the American Legion, she found new fans. It helped that she threw in a few extra jokes about serving in the Navy.

“They loved my act,” Glenn said. “I felt nothing but love from that audience.”

Tamburrino said Glenn’s act “blew me away.” He didn’t hear a single complaint or cross word from anyone who attended.

“It was an awesome show,” he said.

Glenn said the veterans at the American Legion passed around a tip jar and gave generously.

“It ended up being my highest-paying set so far,” Glenn said. “So, take that for what it’s worth.”

Kary Greif, who books events for the American Legion Post in Sugar Hill, remembers Glenn being a hit with the audience. The warm reception didn’t shock Greif. The audience respected Glenn for her service in the Navy.

“It’s a veterans’ organization,” Greif said. “They’re veterans and very supportive of veterans. Those folks, they signed up to defend our freedoms. You would think they were more conservative or whatever if you want to refer to it that way, but they’re very accepting and open.”

Glenn, like most artists, is self-critical. Her act doesn’t have a narrative through-line, mainly because it’s short. She’d like to develop a longer act with more of a story because she considers herself a storyteller at heart. In addition to her comedy act, she’s pursuing a career in film and television. Glenn has written a sitcom pilot based on her experiences at the General Assembly. Some studios have looked at it, but passed, she said. She’s written two feature film scripts.

She also wrote an award-winning short film script called “Shelter in Place,” a story about a trans woman who is a bookkeeper for a mob boss. Her boss, a woman, is 100% supportive of her transition and behaves like the CEO of a progressive tech company.

“She is in every way exactly the sort of boss you’d want to have when coming out as transgender,” Glenn said. “She’s nurturing, kind, and supportive but she’s also a vicious criminal who murders people.”

Glenn’s character ultimately betrays her boss and puts her own life at risk.

“People have such contradictions within them,” Glenn said.

And, even in a country where people fight daily about what freedom means, people can still surprise you.

Glenn likes to close her set with a bit of hard-earned wisdom drawn from her own experiences.

“If you love a boomerang, throw it away,” she says. “If it comes back to you, it’s definitely a boomerang. If it doesn’t, it’s just a stick. You threw away a stick.”