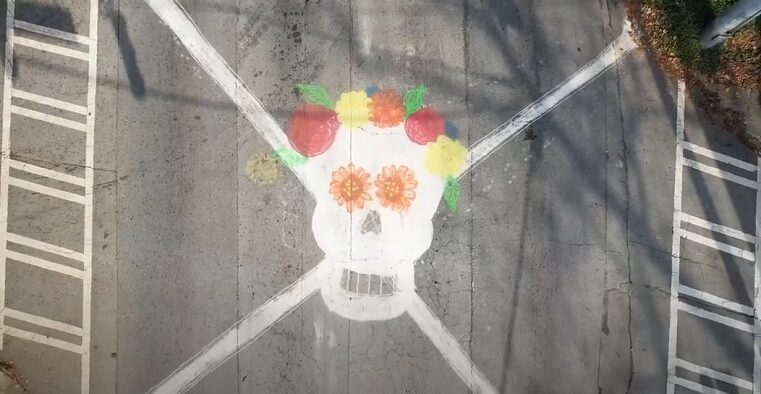 A screenshot from drone footage of a mural at Decatur's notorious "Intersection of Death." Drone footage by Aaron Cummings
Share

Decatur, GA — A group of artists painted this mural at Decatur’s notorious Intersection of Death — North Decatur Road and Superior Avenue — in time for Day of the Dead, Nov. 2. The drone footage is by Aaron Cummings.

According to some of our readers, the effort is an update of an older version of the mural. The artists who painted the mural are a group from the Glenn Creek Greenway, which includes Judith Lomas.

The Day of the Dead is a Mexican holiday where families welcome back the souls of their deceased relatives for a brief reunion that includes food, drink and celebration. The holiday is celebrated each year from Oct. 31 to Nov. 2. According to tradition, the gates of heaven open at midnight on Oct. 31 and the spirits of children can rejoin their families for 24 hours. The spirits of adults can do the same on Nov. 2., according to the History channel.

As first reported by Decaturish, data released by Decatur Police show there have been 31 crashes at that intersection between Jan. 1, 2012, and Aug. 4, 2022. Police officers issued citations in 25 of the crashes. Seven of those crashes resulted in injuries. No deaths were reported between Jan. 1, 2012, and Aug. 4, 2022, but a recent article in the Atlanta Journal-Constitution said there have been “at least two deaths near it” since 2007.

About 5,000 linear feet of the area is in unincorporated DeKalb County, so the city will have to partner with the county to address issues along the North Decatur Road. Mayor Patti Garrett said she has had conversations about the short-term measures with DeKalb Commissioners Jeff Rader and Ted Terry.