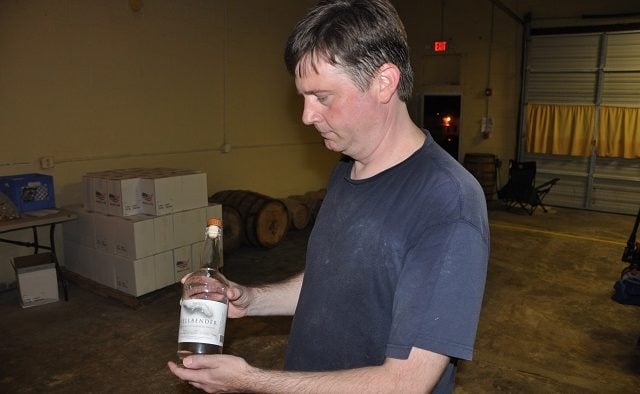 “Although the current location is being redeveloped, we’re pleased that they have chosen to stay in Decatur and found another spot, and they’re getting the property up and running,” City Manager Andrea Arnold said.

The new location is a combination of three buildings and a courtyard that includes a tasting room, barrel house and production building, a press release from the company states.

“We are excited to be able to expand our operation here in Decatur,” Anderson said. “It will give us a chance to grow and continue to make our award-winning handcrafted spirits.”

“The laws have changed significantly since we first opened eight years ago regarding what we’re able to do as spirits producers, and this new location will give us better visibility and allow us to share our spirits and passion for making them with more people,” Anderson said.

– In other business, the city commission approved one of two votes to redistrict the city’s election districts.

Since redistricting is done through amending the city’s charter, the board will take two votes on the item to approve the changes. The final adoption will be on Nov. 21.

The city has two voting districts. The changes to the districts would go into effect on Jan. 1, 2023.

“Based off of the results of the 2020 Census, the populations of our current voting districts do have enough deviation to mandate adjustments to the voting districts to meet the one person, one vote requirement,” City Manager Andrea Arnold said.

After meeting with the State Legislative and Congressional Reapportionment Office, the city has proposed districts with a total deviation of 0.16%, or a difference of 20 people.

“Essentially, we’re looking at extending District 2 east along the existing boundaries of East Ponce de Leon Avenue and East Howard Avenue going from North McDonough Street to North Candler Street,” Arnold said. “The reduces the District 1 population by 701 people for a total of 12,474 and that increases District 2 by the same amount, and bringing District 2 up to a total of 12,454.”

– The city commission established a project budget of $1.61 million and awarded a contract to Magnum Paving for milling and repairing streets in the city. The board also approved a change order to the contract to reduce the bid amount from $2.5 million to $1.3 million.

The Georgia Department of Transportation has provided $208,990 as well as part of its Local Maintenance and Improvement Grant program.

This year, the repair and repaving program will cover about 0.6 miles. The streets scheduled for repairs are East Ponce de Leon Avenue from Sycamore Drive to the city limits, Arcadia Avenue from the Sams Crossing bridge to about 300 feet north, and South McDonough Street from Davis Street to Garland Avenue.

“The work in this project includes comprehensive maintenance in these various corridor segments to address all facets of transportation infrastructure, including pedestrians, cyclists and motorists,” Assistant City Manager David Junger said.

Junger explained that the original bid was based on a larger scope of work with other road segments.

He added there was a disconnect between the paving recommendation that was made in December 2021 and the budget process for the current fiscal year.

“We didn’t request the amount of money we should have and therefore there was a shortfall, so to maintain within our budget we evaluated the priorities,” Junger said.

“Some of the other things we are doing more, the visitors center is now open seven days a week. Originally, it was open Tuesday through Saturday. We hired a part-time visitors center employee,” Harris said. “We sponsored the plantings and the pots and the hanging baskets on the Square to make it look more inviting.”

The bureau additionally partnered with the downtown development authority to pressure wash the sidewalks, the bandstand and the trash and recycling bins in downtown Decatur.

Looking ahead, the tourism bureau is working to refresh the visitors center, work on creating a new website, have more pop-ups and activities, and establish an ambassador program. Participants of the ambassador program received a grabber from the city, so they can help pick up trash in the city.