Decatur, GA — The city of Decatur’s election District 2 will extend to cover more of downtown Decatur. The city commission, at its Nov. 21 meeting, approved the new election districts for the city.

The city has two voting districts. The change to the districts will go into effect on Jan. 1, 2023.

For the city commission, redistricting is done through amending the city’s charter. The board had to take two votes to approve the changes. The city commission first adopted the districts on Nov. 7.

The new districts have a total deviation of 0.16%, or a difference of 20 people.

“With the proposal with extending District 2 east along the existing boundaries of East Ponce de Leon [Avenue] and East Howard [Avenue], starting at North McDonough [Street] going over to North Candler [Street],” Arnold said. “Essentially, we’re moving 701 people from District 1 into District 2. The District 1 population would end up at 12,474 and the District 2 would end up at 12,454. I’m not sure we can get a whole lot closer…to the ideal district population.” 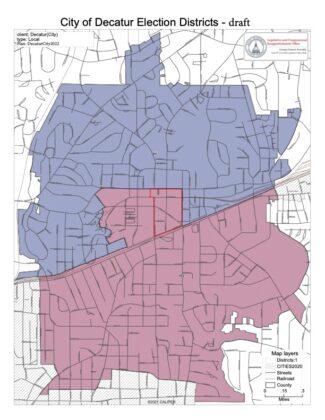 The portion of downtown Decatur outlined in red is the area being moved from District 1 (shown in blue) to District 2 (shown in red) in Decatur. Photo courtesy of the city of Decatur.

— In other business, the city commission established a project budget of $115,000 and awarded a contract to Solutionz, Inc. for about $113,404 for technology upgrades to the multipurpose room at the Decatur Recreation Center.

Solutionz, Inc. has been the city’s audiovisual technology provider since 2015.

“This project recommends a system that’s similar to the virtual meeting system that we have here in the city commission meeting room. This equipment will provide for hybrid meetings in the multipurpose room at the rec center so that way we can have in-person and virtual attendance for meetings,” Arnold said.

She added, it would give the city commission a chance to hold meetings in a larger venue if needed. The equipment will also be available to other city boards and commissions. The capacity of the multipurpose room is about 200-250 people.

The work is expected to begin in late winter 2023 and be completed in two weeks.

— Energy and Sustainability Manager David Nifong gave an update on Georgia Power’s rate case. In June, Georgia Power filed a request with the Georgia Public Service Commission to set rates over the next three years, beginning in January 2023.

Georgia Power has proposed a 12% increase in the base rates for homes and small businesses, which would be a $200 yearly increase for the average household, according to Georgia Public Broadcasting.

In August, the city filed an application to intervene in the case. Decatur is part of the Georgia Coalition of Local Governments with the city of Atlanta, city of Savannah, DeKalb County and Athens-Clarke County.

Nifong said the decisions made by the PSC in this case will affect the city’s ability to meet the clean energy goals in its clean energy plan.

There have been two rounds of hearings so far. The PSC is hearing the month netting tariff separately from all other matters.

The coalition filed testimony in support of expanding monthly netting. Monthly netting happens when Georgia Power purchases excess solar power at the retail rate over the course of a month from solar systems.

“The key recommendations in that testimony include removing the cap on monthly netting, rejecting the company’s proposal that all new residential solar customers take service on that three-part smart usage tariff…and creating a working group or similar body including the company, PSC staff, the coalition and other stakeholders to design the next iteration of the monthly netting tariff,” Nifong said.

The coalition filed direct testimony in the case regarding four priorities other than monthly netting.

“Those four priorities were lowering the price of the community solar subscription; supporting the company’s request to expand its EV make-ready program, which provides the critical charger infrastructure needed to expand EV charging across the state; rejecting the company’s request to maintain what it calls its smart usage tariff as the default rate for new premises; and the company also requested to close the current residential, or R tariff to new customers,” Nifong said.