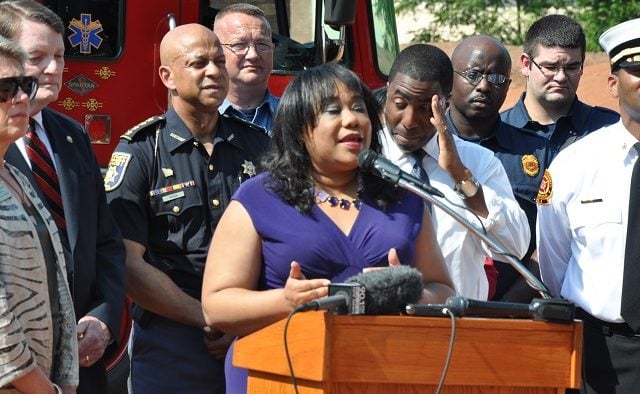 The extortion scheme was connected to a $1.8 million county contract, according to a press release from the U.S. Department of Justice.

“According to court documents and evidence presented at trial, from about May 2014 to August 2014, Sharon Barnes Sutton, 63, of Stone Mountain, Georgia, demanded monthly payments of $500 from a subcontractor, later increasing her demand to $1,000 per month,” a press release from the Justice Department says. “The subcontractor made the first $500 payment in June 2014 at a restaurant in Decatur and the second $500 cash payment in July 2014 at Barnes Sutton’s residence. The FBI disrupted Barnes Sutton’s continued demands in August 2014. Separately, Barnes Sutton also accepted a $5,000 cash bribe from an FBI confidential source who had business before the DeKalb County Board of Commissioners.”

She was convicted on two counts of extortion, and sentencing will next year. She faces up to 20 years in prison.

A former federal prosecutor told the Atlanta Journal-Constitution that Barnes will likely get a four-year sentence under sentencing guidelines.

The AJC reports that Barnes’ attorneys argued the bribes were actually donations to an “informal legal defense fund.”

Sutton lost her seat on the county commission in 2016 when she was defeated in a runoff by current Commissioner Steve Bradshaw. Sutton was seeking a third term in office.

She was known for courting controversy in her time as a commissioner.

Former Clarkston mayor Emanuel Ransom told Decaturish in 2014, “She’s one of the worst commissioners we’ve ever had in the fourth district.” She was accused of personally holding up a contract to reconstruct the fire station in Avondale Estates. Sutton said at the time, she delayed awarding the contract because she wanted to explore the possibility of entering into an intergovernmental agreement with Avondale Estates that would ensure the city would pay a “fair market rate” for the station if the city ever wants to buy it.

Sutton also faced questions concerning her use of her county-issued purchasing card.

During her race against Bradshaw, Sutton made an issue out of Bradshaw’s military service and accused Bradshaw of trying to “hide” his white wife from voters.