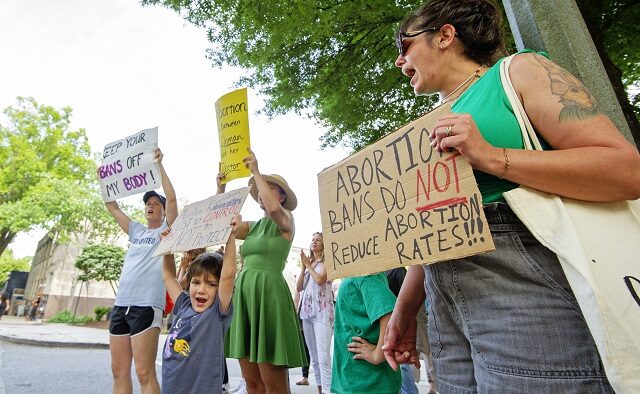 Atlanta, GA — The Superior Court of Fulton County, on Nov. 15, overturned the state’s six-week abortion ban and stating the law was unconstitutional under the Georgia Constitution.

The court’s injunction was issued in a lawsuit filed by abortion providers and advocates earlier this year, according to a press release from the American Civil Liberties Union of Georgia.

Judge Robert McBurney struck down the six-week abortion ban, declaring that the law was “plainly unconstitutional” when it was passed by the legislature in 2019, the Georgia Recorder reported.

The General Assembly passed House Bill 481, the Living Infants Fairness and Equality (LIFE) Act, in April 2019. Gov. Brian Kemp signed it into law in May 2019. The law went into effect in July 2022 following a federal appeals court ruling.

Before the federal court’s decision, abortion was legal up to 22 weeks in some cases in Georgia.

The bill criminalized abortions occurring after a fetal heartbeat is detected, which usually happens around six weeks of pregnancy, the ruling states.

“Again, the LIFE Act did all these things in the spring of 2019, when the supreme law of this land unequivocally was — and had been for nearly half a century — that laws unduly restricting abortion before viability were unconstitutional,” McBurney wrote in his opinion.

He further ruled that a subsequent change in federal constitutional law, which happened with the Dobbs decision, doesn’t revive the ban. If the legislature wishes to ban abortion, it must pass a new law “in the sharp glare of public attention that will undoubtedly and properly attend such an important and consequential debate,” McBurney wrote in his order.

The order also strikes down a provision requiring physicians to report to the state Department of Public Health when an abortion qualified under the state’s narrow exceptions, such as in the case of rape if a police report has been filed, according to the Georgia Recorder.

McBurney did not offer a ruling on whether the abortion restrictions in the 2019 law would be allowed under the state constitution.

“Whether Georgia’s Constitution countenances a post-heartbeat ban (with certain exceptions for medical emergencies, rape, etc.) is not being decided here because that is not (yet) the law in Georgia,” McBurney wrote.

Rep. Mary Margaret Oliver (D-Decatur) was grateful for the decision.

“I was grateful that we had an intellectually honest judge who was willing to apply the law. I think that Judge McBurney is universally respected by lawyers I know, and I think his decision is legally correct,” Oliver said.

She anticipates there will be an appeal from the state and said it will be an ongoing political discussion in the Georgia General Assembly.

“House Bill 481 will continue until we have an ultimate decision from the Georgia Supreme Court on Georgia’s constitution,” Oliver said.

Monica Simpson, executive director of SisterSong Women of Color Reproductive Justice Collective, the lead plaintiff in the case, said that while the organization applauds the end of the ban, it shouldn’t have existed in the first place.

“After a long road, we are finally able to celebrate the end of an extreme abortion ban in our state,” Simpson said in a press release. “Now, it’s time to move forward with a vision for Georgia that establishes full bodily autonomy and liberation for our communities.”

She added that SisterSong will continue to work toward a Georgia where everyone has the freedom to decide whether to have children and raise families in thriving communities.

“We will have to keep fighting in Georgia to hold our legislators accountable, but this ruling proves we have the power to keep winning,” Simpson said.

The ruling recognizes that the General Assembly’s decision to limit abortion access was in clear violation of the law, said Andrea Young, executive director of ACLU of Georgia.

“Today [Nov. 15] is a great day for Georgia women and for all Georgians,” Young said. “We hope that the Georgia Supreme Court affirms that right, and in doing so, affirms the long-standing Georgia rule that the legislature cannot pass laws that disregard our constitutional protections.”

Amy Kennedy, vice president of external affairs at Planned Parenthood Southeast added that the ruling offers relief from the six-week abortion ban, but the threat to Georgians’ rights and health will remain if politicians try to interfere with personal decisions.

“We already know that abortion opponents will stop at nothing until abortion has been completely outlawed,” Kennedy said. “This is a critical step in the long fight for reproductive freedom. We are prepared to do everything we can to ensure abortion care is available and accessible to everyone in Georgia.”