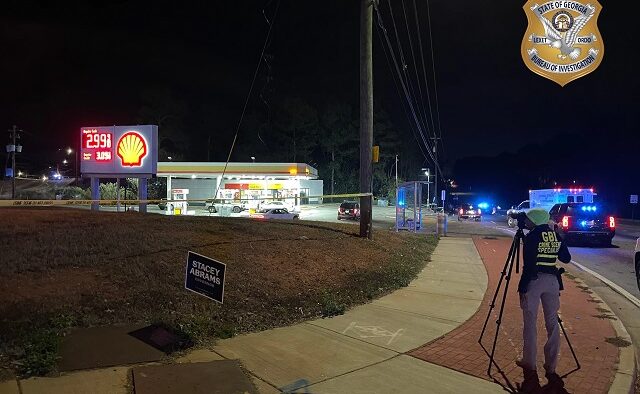 Lithonia, GA — DeKalb Police shot and killed a man while responding to a call about a homicide, and the GBI has taken over the investigation.

“Preliminary information indicates that at 8:28 p.m., DKPD officers responded to a 911 call about a homicide that just happened in the area of Cedar Croft Court, Lithonia, GA,” a press release from GBI says. “As officers were searching for the subject involved in the homicide, they encountered a man armed with a rifle less than a mile away at the Shell Gas Station, 6470 Covington Highway, Lithonia, GA. The man began shooting at officers, damaging several patrol vehicles and a civilian’s vehicle. Several DKPD returned fire, shooting the man, who died at the scene. The man’s ID is pending next of kin notification.”

DeKalb Police confirmed the incident in a separate press release.

“The GBI will continue to conduct an independent investigation and, once complete, will be turned over to the DeKalb County District Attorney’s Office for review,” the press release from GBI says. “This is the 106th officer involved shooting the GBI has been requested to investigate in 2022.”