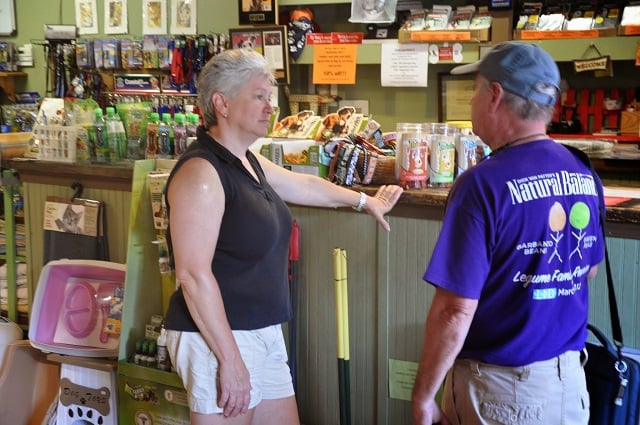 Joann Schwartz, left, talks to a customer on July 26, 2014, during the Kirkwood Feed and Seed 10th anniversary event. Photo by Dan Whisenhunt.
Share

Atlanta, GA — Kirkwood Feed and Seed could soon have a new owner.

The pet services company — which includes Kirkwood Urban Feed and Bark and Lounge — is located at 2006 Hosea L Williams Drive NE. It opened in 2004.

Owner Joann Schwartz said Destination Pet made her a fair offer that included retaining her current employees at the business. According to its website, Colorado-based Destination Pet is a national company buying up businesses like Kirkwood Feed and Seed around the country.

The deal isn’t done yet. The new owners still have to get a special use permit approved by the city of Atlanta, but that part of the process has some momentum.

During its Nov. 10 meeting, the Kirkwood Neighbors’ Organization voted overwhelmingly to support the special use permit. The permit will be reviewed by the local Neighborhood Planning Unit before it is considered by the city for approval.

Schwartz has received many offers over the years, but recent concerns in her personal life — a sick partner and ailing mother-in-law — convinced her that this is the right time to turn the business over to someone else.

Destination Pet doesn’t intend to reinvent the wheel when it comes to running Kirkwood Feed and Seed, Schwartz said.

“Their goal is to keep in business, not to say, ‘Let’s start over.’ I appreciate that part of them,” she said.

Schwartz started the business in July 2004, having previously worked as a police officer in Rockdale County. She left that job to work as a contract investigator for the U.S. Postal Service, but lost the job due to budget cuts.

“I didn’t want to go back to being a street cop, to be honest with you,” she said. “I had some people say, ‘You know, Kirkwood’s a happening place for dogs and pets. Think about opening a pet place.’”

So she did. In 2008, the suites next to her storefront on Hosea Williams Drive vacated, and she expanded her business to include a doggy daycare and boarding service.

Schwartz attributes her company’s longevity to the quality of her products and being a part of the neighborhood.

“A lot of people love in-town living and supporting the neighborhood businesses,” she said.