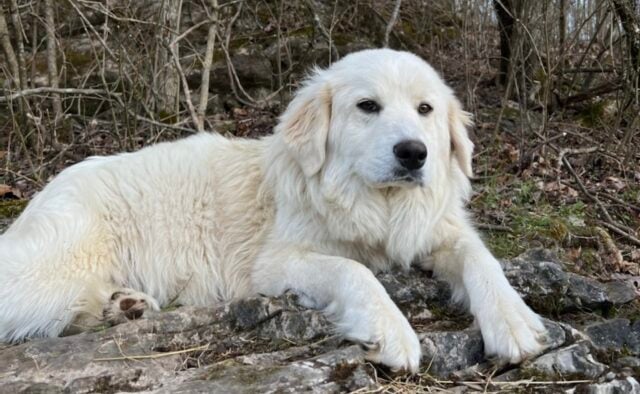 Greater Decatur, GA — On a late Thursday night, John Wierwille and his family saw about 11 coyotes on his property in the Laurel Ridge neighborhood around 9 p.m. He threw stones at them to scare them off, and the coyotes ran away. All seemed good.

But around 3:30 a.m. on Friday, Nov. 4, he heard his livestock guardian dog barking, so he got dressed and went outside to see what was happening. His dogs usually don’t bark unless they feel a threat or are warning off other creatures, “but they don’t bark otherwise because a bark is for a purpose,” he said.

Wierwille had been clearing a small property by his home to have some extra space for his sheep. He is a shepherd, but like most shepherds, he doesn’t have land of his own.

“As an urban shepherd, my primary work is finding good pasture for a few hundred otherwise homeless sheep,” Wierwille said. “I do that by leasing them out to clear brush in parks and backyards and around schools and other public buildings.”

He checks on the sheep all over the city and keeps dogs with them to make sure the sheep are safe. He runs a business called Ewe Can Do It Naturally.

“It was crazy for about 20 to 30 minutes while he ran around,” Wierwille said. “You could hear the fighting going on, and I couldn’t really see it.”

He ran back to his house to get a flashlight. He could hear the fighting continue and heard Casper get hurt, but he couldn’t find him with just light from the flashlight in the dark. Wierwille went back to also get a broomstick in case he needed to fend off a coyote, but he still couldn’t find Casper.

“Some of it happened right on the edge of the pasture,” Wierwille said. “He killed three of them really quickly right in the pasture.”

“Usually, the coyotes would just leave. That’s not how they usually act,” Wierwille said. “I honestly do think it had everything to do with them just being in a larger group than they usually are in. We’ve never really seen them act like that before.”

Chris Mowry, professor of biology at Berry College, is working with the Atlanta Coyote Project, which studies coyote behavior in the metro area. He said it is very uncharacteristic to see coyotes in large groups. Coyotes are typically wary of humans and hunt or search for food on their own.

“Normal behavior is a small family group. By that, I mean, mom and dad and their pups, anywhere from one to six, that would be living together as a family group,” Mowry said.

Wierwille waited around for a while, hoping Casper would come back. Casper is an all white, adult Great Pyrenees. He weighs about 85 pounds at 20 months old.

“I was a little freaked out. There wasn’t enough light to be able to tell what all was going on or where anything was. I couldn’t see him, and he’s all white, so he would’ve stood out, and he just wasn’t anywhere around,” he said.

Wierwille got up early Friday morning, around 5 a.m., and began looking for Casper. Some friends came over on Friday, Nov. 4, to search for the dog, but Casper was nowhere to be found.

Around 7 a.m. Wierwille was walking around the fence of the pasture. He found a lot of blood and some hair where it seemed like Casper tried to climb back into the pasture.

“I knew he was hurt. When I called people to come over and help, they all came,” he said. “We just couldn’t find him anywhere.”

Eventually, Wierwille posted in the Laurel Ridge Neighbors Facebook Group to ask the neighbors for help and to warn him that Casper was injured. He wasn’t sure how Casper would react to other people when injured.

They searched the areas from Mason Mill to Frazier Road and in the neighborhoods on both sides of Burnt Fork Creek and the railroad line.

Wierwille and those searching had almost given up hope on Saturday after searching for Casper with no luck.

“We looked all day Friday, all day Saturday, and then Sunday morning, I went out with my daughter to feed the chickens,” Wierwille said. “There’s this old chicken hutch that we raise the baby chicks in, and Casper poked his out of it as we were walking by. He scared the bejeezus out of me.”

Wierwille was so startled, he threw the compost bowl he was holding. But he was just happy to see him. He was also scared for Casper and unsure how he would be able to help.

“My girls see a lot working with me and I generally want them to see and learn, but this was so bad I pushed my girl behind me, so she would not see and stood there looking at him and telling her to look away because Casper had been really badly hurt,” Wierwille said. “Not that it stopped her. She looked around and then pulled back and said, ‘Daddy, he’s really hurt bad.’ I just nodded. I had no words.”

Casper’s injuries didn’t phase him. He was happy to see his family.

“He eased himself out of the chicken hutch confines and forced his head straight, so he could look me in the eyes and he gave a little woof as if to say, ‘Ok, enough looking already. I know I look bad and smell worse. I came back, so you could fix this, Boss. Let’s get started.'”

Wierwille and his daughter got to work right away on Sunday, cleaning Casper up with soap and water and trimming back his fur.

“That’s when I realized he was really seriously hurt. He stood through all of that. He didn’t try to get away. He let us clean him up,” Wierwille said.

After getting Casper cleaned up, Wierwille began looking for a vet who would take Casper and care for him. He took him to a local vet and got him much needed medicine, but the cost of the care was too expensive.

So, they took Casper home, bandaged him up the best they could and continued calling vet clinics. Wierwille was able to get in touch with LifeLine Animal Project, who intervened to take care of Casper.

“Casper is currently at the Community Center Clinic. He is doing well. He lost a lot of skin, so the wounds require daily care,” said Tracy Thompson, shelter director at LifeLine Animal Project. “He was at [the veterinary clinic] almost two weeks. The prognosis at first was extremely guarded.”

There was one night when a veterinarian from the veterinary clinic called Wierwille to express concerns Casper might not make it. They were worried about sepsis, but by the next morning he was standing and hopping around. Wierwille said he’s a remarkably perky patient.

Thompson added that Casper has surprised everyone with his will to live and sweet spirit.

“The [veterinary clinic] staff loved him and as I spoke to them daily after each wound care session they always said he was so brave,” Thompson said. “He had a tail amputation and lots of necrotic tissue removed in the first few days. After that, it was and will continue to be daily wound care.”

Lifeline has seen numerous gravely injured animals and the vets on staff say it’s interesting to be able to treat conditions they wouldn’t typically see at a wellness clinic, she added.

“John Wierwille contacted [LifeLine CEO Rebecca Guinn] because he needed help and LifeLine would figure out a way to help save his dog,” Thompson said. “We expect a full recovery at this point. He will be in our clinic until he can go home for home care.”

Wierwille added that Casper still has blood in his eye, but he seems like he can see just fine.

“Casper has one blue eye and one brown eye,” Wierwille said. “People say that when dogs have that, they can see into heaven and earth. I think Casper might be able to do that. He’s a pretty remarkable dog.”

Once Casper does go home, he likely will need around-the-clock care. Wierwille said several neighbors have volunteered to help when Casper comes home and are learning how to treat his wounds.