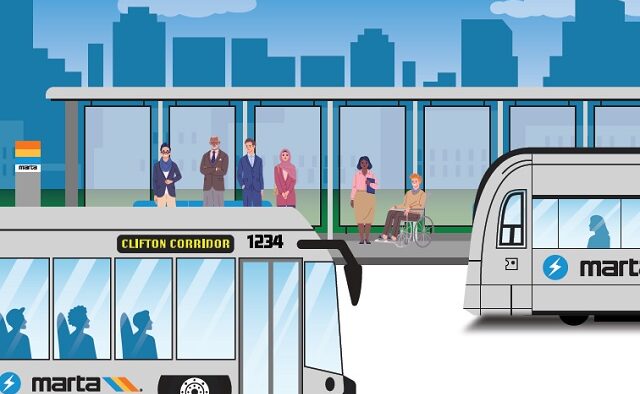 Atlanta, GA — MARTA officials are moving forward on the Clifton Corridor, a transformational transit project that would connect Decatur to the Lindbergh Center station, with key stops at major institutions along the way.

MARTA hosted engagement opportunities over the summer for the community to provide feedback on 10 options for route and vehicle type. During a public meeting on Nov. 15, MARTA unveiled three proposals to get the job done: One would consist of light rail and the other two would involve bus rapid transit.

The lines would terminate at either the Decatur or Avondale MARTA stations, according to a copy of the presentation forwarded to Decaturish.

The options are as follows:

— Bus rapid transit with dedicated lanes connecting Lindbergh to the Avondale station. This would include elevated crossings at Clairemont Avenue and Scott Boulevard at North Decatur Road. It may also include a reversible lane along North Decatur Road between Clairemont Avenue and Scott Boulevard to minimize the project’s footprint.

— Bus rapid transit with a dedicated guideway between the Lindbergh and Avondale stations that would be considered Arterial Rapid Transit, which means it would mix with regular traffic. But it would have advantages over the MARTA buses people are used to encountering on local roads. It would include shorter wait times, signal priority and enhanced station amenities. It would not require widening or dedicated transit lanes. According to MARTA, the arterial rapid transit would operate at 15-minute frequencies or less and the stops would include amenities people are used to seeing at transit stations, like seating and arrival screens. A Decaturish commenter pointed out that this option includes a second Arterial Rapid Transit route from downtown Decatur to Lindbergh. Only the Arterial Rapid Transit section from Decatur to North Decatur / Clairemont will run through mixed traffic, which will go onto dedicated BRT lanes to Lindbergh. MARTA confirmed the accuracy of the commenter’s observation about the plan.

— Light rail transit between the Lindbergh and Avondale stations. This option would include a possible reversible transit lane along North Decatur Road between Clairemont Avenue and Scott Bouelvard to minimize footprint.

“The proposed routes connecting to the Avondale MARTA station offer transit options in an area that is densifying and lacks transit,” Garrett said. “I also like the arterial bus rapid transit option with enhanced service to downtown Decatur. ART, while using existing roads, makes fewer stops and would connect directly to downtown.

She encouraged the community to keep engaging in the public input process.

“Decatur is unique in that there are [three] transit stations,” Garrett said. “The Clifton Corridor transit expansion will continue to enhance our alternative transportation choices, contributing to cleaner air and hopefully a less car-dependent culture.”

The MARTA board could adopt the plan for the Clifton Corridor in early 2023. MARTA Project Manager Bryan Hobbs said the project could be completed by 2036, but said bus rapid transit options could be implemented sooner. Hobbs said CSX rail has been more amenable to negotiating for right of way than it has been in the past, which would make MARTA’s task easier. He said CSX is focused on efficiency, and changes in the economy have made them reevaluate how they operate.

“We’re having conversations now,” Hobbs said. “They are more open now to having a conversation about sharing some right of way, we haven’t signed anything.”

Assuming MARTA’s board adopts a plan in early 2023, the next step will be assessing the environmental impact of the project, which could take 12 to 18 months.

The economic impact of the project would be substantial, providing more connectivity to Emory, Atlanta’s largest employer.

Hobbs said making it easier to get to some of the key drivers of Atlanta’s economy “makes the area more viable from an economic standpoint.”

“We have people coming from all around the metro area into this area,” Hobbs said. “We have enough congestion. Transit gives people options.”

There will be a virtual input meeting on Nov. 17.

For more information, contact Hobbs at [email protected]. To request this information in another language or in an accessible format, call 404-848-4037.