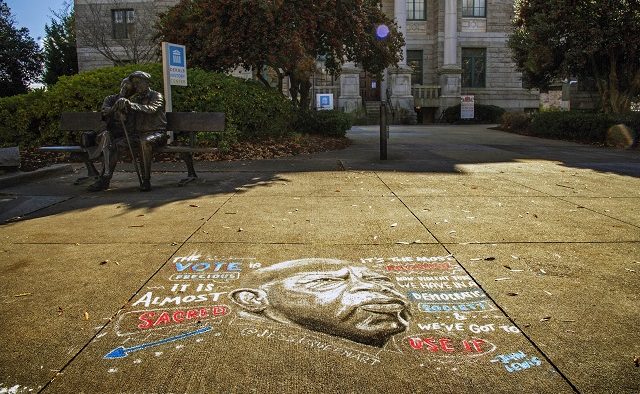 A chalk art image of the late statesman and civil rights leader John Lewis by @Jessiqueenart is seen in front of the old DeKalb County Courthouse in downtown Decatur on election day Jan. 5, 2021. Photo by Dean Hesse.
Share

Decatur, GA — The DeKalb County Board of Commissioners, at its Oct. 25 meeting, accepted a monument to the late Rep. John Lewis that will replace the Confederate obelisk that was removed from the Decatur Square in 2020.

The John Lewis Commemorative Task Force was created in 2021 and designated the former site of the Confederate obelisk as the future memorial site honoring Lewis. The monument will be placed in the same spot, in front of the Historic DeKalb County Courthouse.

The art piece has not been completed yet, and the task force plans to announce the artist and an artist reception in December, Decatur Mayor Patti Garrett said.

“The Task Force has determined acceptance of the proposed monument for placement on County property is an appropriate means to honor the life and legacy of the Congressman John Lewis and celebrate Congressman Lewis’ remarkable life and fight for civil rights, justice and equality,” the agenda packet states. “The acceptance of the proposed monument to Congressman Lewis for placement on County property is the request of the Task Force.”

The task force was created by joint resolutions in the city of Decatur and DeKalb County.

“John was a giant of a man, with a humble heart. He met no strangers and he truly was a man who loved the people and who loved his country, which he represented very well. He deserves this honor,” DeKalb Commissioner Mereda Davis Johnson said at the time of the joint resolution.

Garrett also said at the time that it was an honor to join Davis Johnson to sign the declaration establishing the task force.

“John Lewis was an inspiration and voice of hope for all and his legacy lives on to instill a vigilant expectant hope to this generation of young advocates of good trouble,” Garrett said.

Garrett also told Decaturish that the task force was formed to find the best and most appropriate manner in which to commemorate the congressman. Much of DeKalb County, including the location of the monument, was in Lewis’ district.

Former DeKalb CEO Burrell Ellis and Garrett are the co-chairs of the task force. Garrett added that the piece will serve as a reminder of Lewis’ life and legacy.

“It has been an honor to work with Commissioner Mereda Davis Johnson, former DeKalb CEO Burrell Ellis, the John Lewis Commemorative Task Force and the entire DeKalb County Commission and CEO Michael Thurmond on this project, and I am very much looking forward to the installation and completion of the project,” Garrett said.

Lewis was a true leader, she added.

“Regardless of party affiliation, he was admired and respected by all,” Garrett said. “From his early days in the Civil Rights movement until his death, he stood for justice, hope, kindness, and service. The message of Congressman Lewis continues to be an inspiration.”

“It is an honor, and I am proud to serve on this committee,” Elmore said. “The monument is being created to honor a man who spent his life fighting for civil rights, not only alongside Martin Luther King, but as a U.S. Congressman since 1987 until his passing in 2020. Although I did not know him personally, he served with great humility, dignity, and tenacity.”