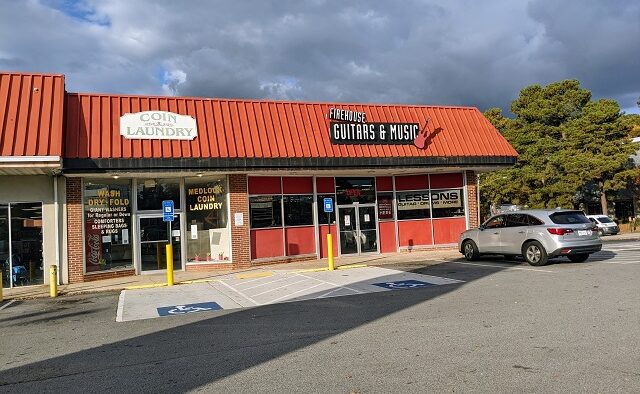 Greater Decatur, GA — With new construction sprouting up all around it, Medlock Plaza is a throwback to a bygone era.

The shopping center is at the same intersection as Suburban Plaza and houses several well-known local businesses, including Melton’s App and Tap and a pet supply store.

But a new deal to place an urgent care business at the shopping center will likely ensure the space isn’t razed and rebuilt to keep up with its neighbors. There’s a cost, of course. Two longtime businesses — a coin laundry and a music store — will have to vacate their spots by January. The music store will likely relocate nearby. But the coin laundry is gone for good.

The building’s owner, Larry Wilensky, said Piedmont intends to spend more than $1 million improving the space to meet its needs.

Eric and Lori Murphy, the owners of Firehouse Guitars and Music, say they’ve been told they need to be out of their space by January. They’re working with Wilensky to take over a space that previously housed a dry cleaning business behind Medlock Plaza. The address of that space is 612 Medlock Road. The space will be larger, and the Murphys are seeking a complimentary business to partner with them to defray some of the cost.

“The concern we have is, the space is bigger, so it’s that much more expensive for a space that isn’t built out,” Lori Murphy said.

Eric Murphy said the new tenant will be a bulwark against a massive redevelopment of the building. Property records say the Medlock Plaza building was constructed in 1945.

“The good thing is hopefully this anchor tenant will make everyone else feel comfortable in the building that isn’t going to be sold Fuqua or Selig or something like that,” Eric Murphy said. “I’m sure these guys wouldn’t move in here and change landlords.”

Jason Chang, the coin laundry’s owner, said he is the third owner of this business. His family bought it in 1994. Unlike the music store, a coin laundry can’t be picked up and moved, Chang said. Typically, a coin laundry requires a $1 million up front investment that takes about 20 years to pay that off, he said.

Chang asked Decaturish to let the public know that he’s seeking someone to buy his laundry equipment, as he only has 60 days to vacate. Chang can be reached at 404-633-5890.

So, what’s next for Chang and his family?

“We’re still asking God about that,” Chang said. “I’m sure he has something good for us.”

The owners of the laundry at Medlock Plaza published this note of thanks to their customers. Photo by Dan Whisenhunt