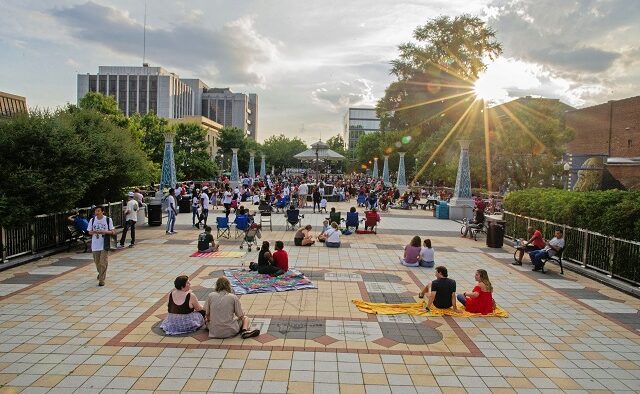 FILE PHOTO USED FOR ILLUSTRATION PURPOSES: The downtown Square begins to fill up as the sun sets during the city of Decatur’s Fourth of July celebration on Monday, July 4, 2022. Photo by Dean Hesse.
Share

Decatur, GA — A reader asked Decaturish to investigate a report of a shot fired on the Decatur Square yesterday.

Sgt. John Bender said the police department did respond to a call about a shot fired in the area, but didn’t find any evidence of a gun being fired.

“On Tuesday, Nov. 1, 2022 at approximately 1:46 pm, Decatur Police responded to the 100 block of Sycamore Street in reference to the sound of a gunshot,” Sgt. Bender said. “Officers met with witnesses who stated they heard what sounded like a single gunshot somewhere on the Decatur Square. One of the witnesses informed the officers they believed a male and female were arguing just before the noise was heard, and the male then left the area.”

Police found a man matching the description provided by witnesses in the 100 block of West Trinity Place. Police detained him and questioned him, but he denied involvement and denied firing a gun. He didn’t have a gun on him.

He did, however, have cocaine and police arrested him for that.

Police did not find any evidence of a gun being fired.