Sen. Raphael Warnock campaigns in Clarkston ahead of Election Day

Sen. Raphael Warnock campaigns in Clarkston ahead of Election Day 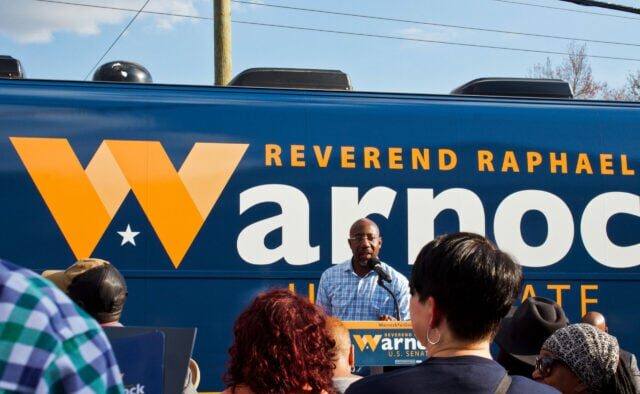 Clarkston, GA — Senators Jon Ossoff and Raphael Warnock visited Clarkston on Nov. 3 to remind voters to cast their ballots and encourage others to head to the polls.

“Each one of you is a guardian of democracy with our vote,” Burks said. “Everybody has a superpower here and I want you to understand your superpower is that vote. Your superpower in engaging your community and making sure that they know we will not tolerate anyone taking our true power and ensuring that democracy is not only in Georgia, the United States, but globally, because what we do impacts everyone.”

Tuesday, Nov. 8, is Election Day for the midterm election. Polls will be open on Tuesday from 7 a.m. to 7 p.m.

Provisional ballots have changed due to Senate Bill 202 which changed Georgia’s voting laws. If a voter tries to vote at a different precinct other than their assigned polling place, their vote will not count unless it is after 5 p.m. on Election Day. Voters should double-check their precinct before going to the polls.

Absentee ballots can still be delivered by hand to the front desk of the Voter Registration and Elections Office weekdays from 8 a.m. to 4:30 p.m. or until 7 p.m. on Election Day.

Voters can check their ballots and precinct location on the Georgia Secretary of State’s website.

He continued to encourage everyone to vote and encourage other people to head to the polls. He also thanked all the volunteers who knocked on doors, made phone calls and wrote postcards.

“Thank you all for everything you did to deliver those two massive underdog victories in January of 2021 and the statement that we made about what Georgia stands for,” Ossoff said.

He added that without Georgia, Congress would not have confirmed Justice Ketanji Brown Jackson and wouldn’t have passed legislation related to infrastructure, high-speed internet and veterans healthcare.

The way to have a voice in a democracy is to vote, Warnock said.

“A vote is a kind of prayer for the world we desire for ourselves and for our children,” Warnock said. “Your vote is your voice. Your voice is your human dignity.”

“Put it this way, we each have value and if we have value, we ought to have a voice. The way to have a voice in a democracy is to have a vote. It is our civic duty, responsibility to cast our vote to lift our voice in this defining moment in our state and in our country.”

He highlighted issues he’ll continue fighting for if elected to his first six-year term in the U.S. Senate.

Warnock will also fight for insulin to be affordable for everyone, for a livable wage and address climate change. 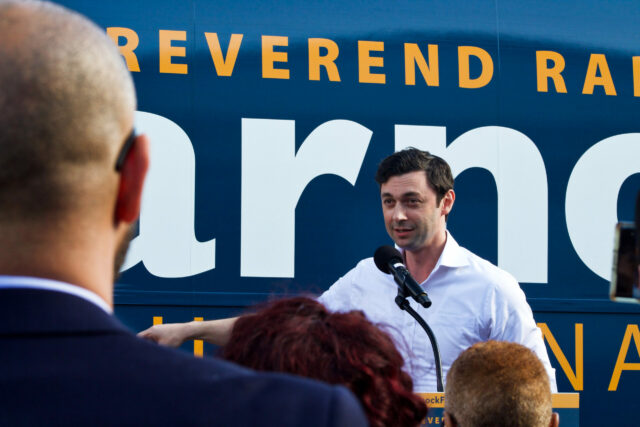 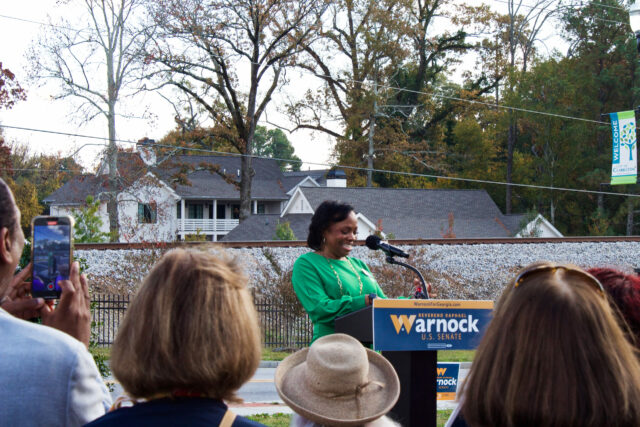 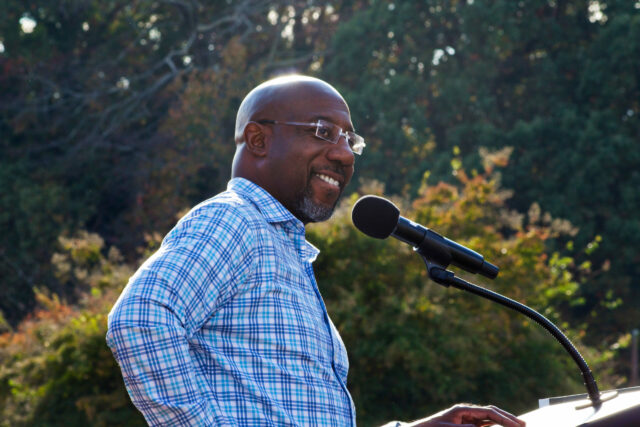 Sen. Raphael Warnock encourages voters to head to the polls during a campaign rally on Nov. 3, 2022 in Clarkston. Photo by Zoe Seiler. 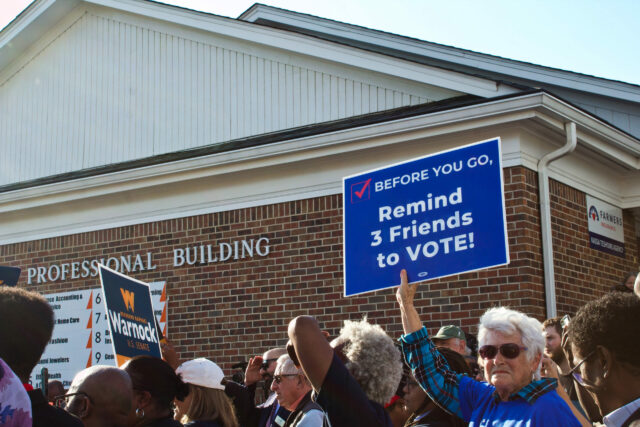 A voter holds up a sign reminding others to vote during a rally for Sen. Raphael Warnock on Nov. 3, 2022 in Clarkston. Photo by Zoe Seiler. 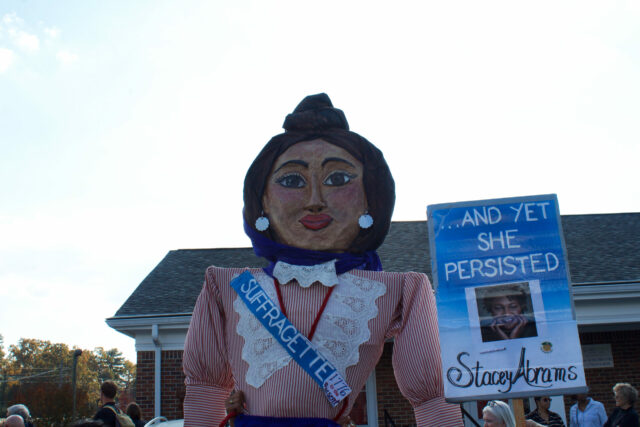 France Wallace, along with others, created a several-foot tall Suffragette made of paper mache and scrap materials. She was on display during a campaign rally for Sen. Raphael Warnock on Nov. 3, 2022, in Clarkston. Photo by Zoe Seiler. 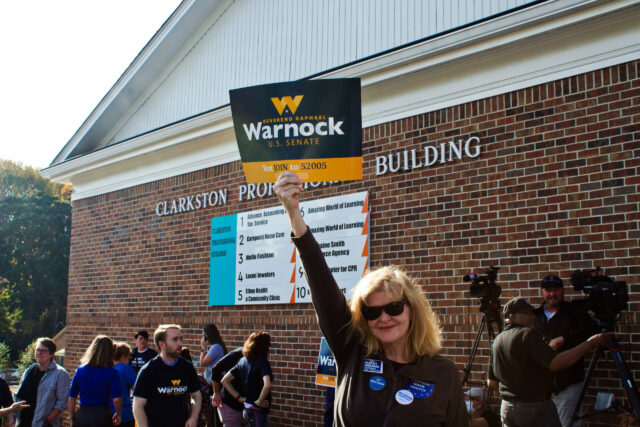 Rebecca Erwin Spencer shows her support for Sen. Raphael Warnock during a campaign rally on Nov. 3, 2022, in Clarkston. Photo by Zoe Seiler. 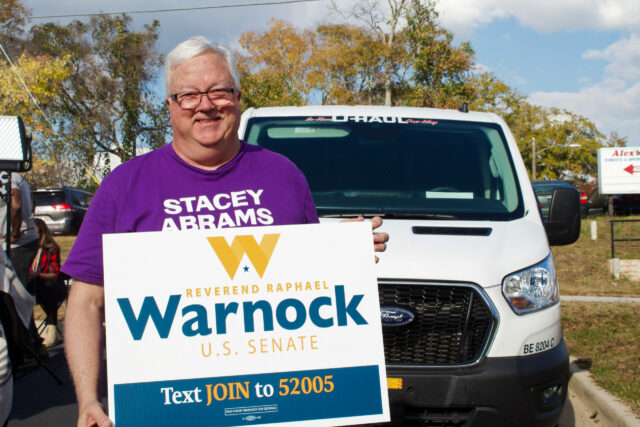 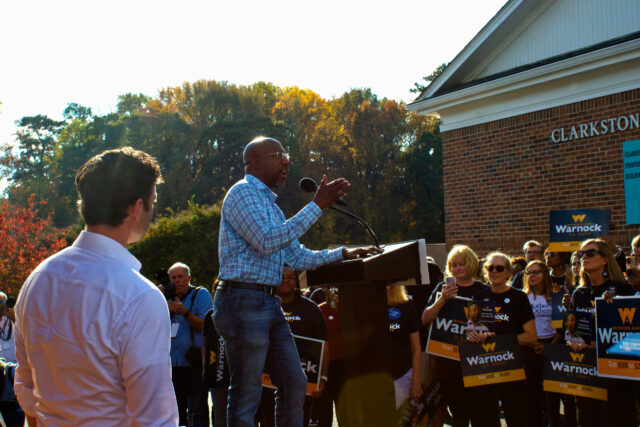 Sen. Jon Ossoff (left) looks on as Sen. Raphael Warnock delivers his stump speech during a rally on Nov. 3, 2022 in Clarkston. Photo by Zoe Seiler. 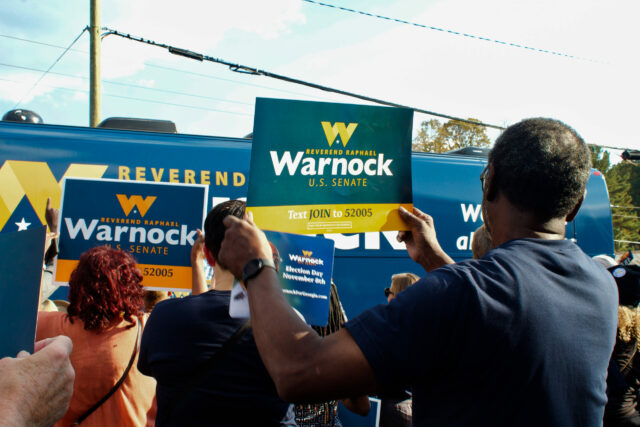 The crowd holds up signs during a rally for Sen. Raphael Warnock on Nov. 3, 2022, in Clarkston. Photo by Zoe Seiler. 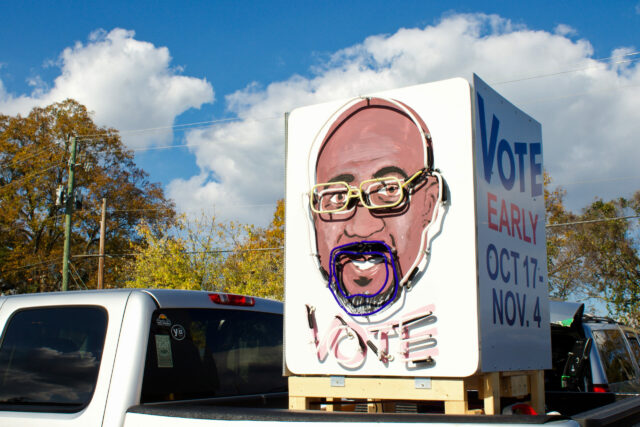 A person attending the campaign rally for Sen. Raphael Warnock on Nov. 3, 2022, displayed a neon sign of the senator. Photo by Zoe Seiler.