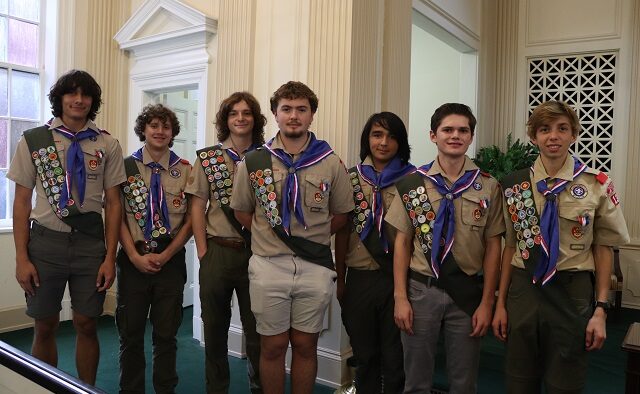 Decatur, GA — Seven scouts from Decatur Troop 134 have earned the Eagle Scout award, according to a press release.

Only six percent of all scouts attain the rank of Eagle Scout, a press release says.

“To earn the rank of Eagle, each Scout must attain 21 merit badges, demonstrate leadership within the troop, and successfully plan and complete a community service project,” the press release says.

Here’s what each scout did for their project:

— Thomas Chiu’s project benefited the Woodland Garden by adding or refurbishing 15 planting tables and two soil bins. Ben Jensen built a kiosk at the Wylde Center to hold garden tools and seeds, and to display information.

— As a Decatur High School baseball player, Griffin Knabe replaced the dugout roofs on the baseball field at McKoy Park.

— Daniel Stadler installed six pull up bars for the Boys and Girls Club in Oakhurst.

“These Scouts received the Eagle Award at a Court of Honor held on October 29th at First Baptist Church in Decatur,” the press release says. “The Scouts being honored each gave a short speech highlighting their most memorable Scouting moments, reflecting on the life skills learned along the way, and thanking the many dedicated leaders and family members who mentored them throughout the journey.  It was well attended by friends, family, and the Scouting community.”

All the scouts are students at Decatur High.

“During their tenure as Scouts, these seven young men collectively led 1,076 service hours to beneficiaries in the Decatur community as part of their,” the press release says. “Eagle projects, completed over 270 service hours on other projects, camped for 314 nights, and hiked 861 miles.”