Warnock, Walker heading to a runoff in U.S. Senate race

Warnock, Walker heading to a runoff in U.S. Senate race 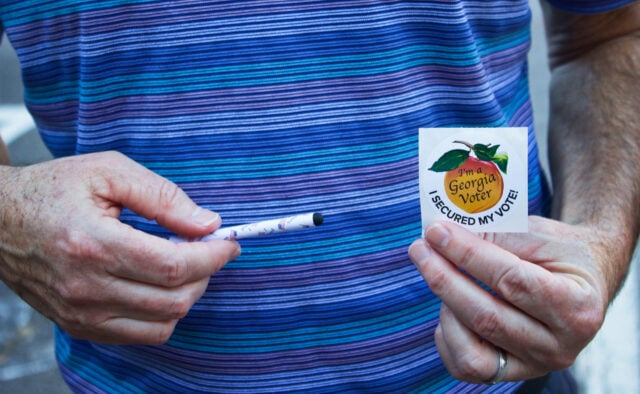 A voter shows off their stylus and sticker after casting a ballot at Avondale Estates City Hall on Nov. 8, 2022. Photo by Zoe Seiler.
Share

Atlanta, GA — United States Sen. Raphael Warnock (D) will face-off with Republican candidate Herschel Walker in a runoff election. Election Day for this race will be on Dec. 6.

Early voting could begin as soon as this Saturday in some parts of Georgia, according to 11 Alive. Decaturish has contacted DeKalb Voter Registration and Elections for more information about early voting in DeKalb County. A spokesperson for VRE said the early voting days and times will be set when the Elections Board meets on Nov. 15.

“We will certify the first election, propose dates and times for the runoff and mobilize all efforts accordingly,” the spokesperson said in an email. “DeKalb VRE still has to plan and prepare for another countywide effort, which includes verifying location availability, staffing, preparing ballots, etc.”

Neither candidate received over 50% of the vote in order to win the election on Nov. 8. Warnock has received 49.41% of the vote, Walker is at 48.52% and Libertarian candidate Chase Oliver got 2.07% of the vote, according to the unofficial results.

Georgia Secretary of State’s Chief Operating Officer Gabriel Sterling said in a tweet that it doesn’t appear either candidate will win outright, according to the Georgia Recorder.

“While county officials are still doing the detailed work on counting the votes, we feel it is safe to say there will be a runoff for the US Senate here in Georgia slated for December 6,” he said.

The Georgia Recorder reported that both campaigns have express confidence in their candidates and their chances.

“Herschel is ahead right now, and we feel very good about where we are,” said Ralph Reed, chairman of the conservative Faith and Freedom Coalition. “We have a path, but we’re unlikely to have this result tonight.”

“We’re not sure if this journey is over tonight, or if there’s still a little work yet to do, but here’s what we do know. We know that when they’re finished counting the votes from today’s election, that we’re going to have received more votes than my opponent,” he said.

A runoff race isn’t new to Warnock. He took office in 2021 after a tight runoff election against Republican Kelly Loeffler. She was appointed by Gov. Brian Kemp to fill Sen. Johnny Isakson’s seat after he retired due to health concerns.

Warnock and Sen. Jon Ossoff helped determine which party was in control of the Senate and gave Democrats a narrow majority, but the runoff could once again decide which party controls the chamber, according to the Georgia Recorder.