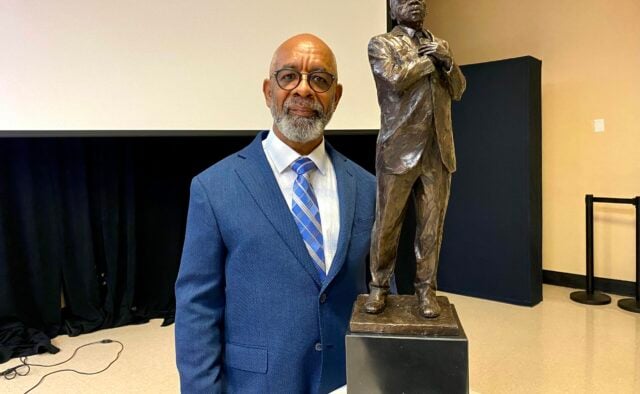 Atlanta artist Basil Watson has been selected by the John Lewis Commemorative Task Force to create the monument of the late congressman. Photo by Zoe Seiler.
Share

Decatur, GA — Within about 18 months, a 16-feet-tall monument of the late Rep. John Lewis will sit on the Decatur Square. The statue will depict Lewis with his hands over his heart, a gesture he used to express love to others.

The John Lewis Commemorative Task Force has selected Atlanta artist Basil Watson to create a statue of the late Rep. John Lewis that will be placed on the Decatur Square. The task force announced the selection during a reception on Thursday, Dec. 29, at the Maloof Auditorium.

The DeKalb County Board of Commissioners, at its Oct. 25 meeting, accepted a monument to the late Rep. John Lewis that will replace the Confederate obelisk that was removed from the Decatur Square in 2020.

The John Lewis Commemorative Task Force was created in 2021 and designated the former site of the Confederate obelisk as the future memorial site honoring Lewis. The task force was formed to find the most fitting and appropriate way to honor Lewis’ legacy. The monument will be placed in the same spot, in front of the Historic DeKalb County Courthouse.

“I always say that John was a giant of a man with a humble heart. He did not meet any strangers. He would stop and talk to anybody, and he would spend time with them. He would take a picture with everyone who wanted a picture with him,” DeKalb County Commissioner Mereda Davis Johnson said. “The contributions John made as a civil rights leader, fighter, congressman, and as a catalyst for progress and change in human and voting rights can never be measured by mere words.”

Watson will begin working on the monument immediately. He anticipates the work to take about 18 months. The statue of Lewis will be 12 feet tall and the base will be four feet tall, making the height of the monument 16 feet. Watson will create a mold of the statue in clay in his studio, which will be forged in bronze.

Once the statue is complete, the task force will sponsor a community-wide event to unveil the work in front of the Historic DeKalb Courthouse.

“I have to first thank Congressman John Lewis for being who he was,” Watson said. “It is great to have an icon and leader who inspires the best in us. He definitely did that.”

Watson met Lewis about 16 years ago at an art fair. They spoke briefly, but Lewis left an impression on Watson. Watson had always wanted to make a bust of Lewis, and he did so in 2020.

“I thought he was so emotive, so strong, so compassionate. He stirred so many emotions. I heard he was ill, and I decided, you know what, I’m going to do this portrait,” Watson said. “It took me probably two days to do the bust. There was so much energy and excitement to do it.” 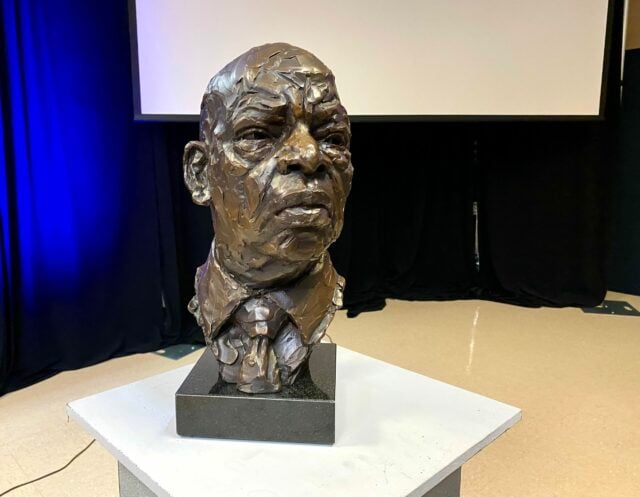 “It has fallen in my lap. My impression of John Lewis has always been first and foremost a lot of empathy. He could feel what you’re going through. He went through it. He knows it, you could feel it,” Watson said. “It was obvious that you have compassion for everything that was righteous.”

Watson aims to express Lewis’ compassion and emotions through his sculpture.

Watson has been an artist and creating sculptures for over 40 years. He also created the statue of Martin Luther King, Jr. that stands near Mercedes-Benz Stadium.

The monument and the reception to it are signs of love for the late congressman, who passed away in 2020.

“The congressman loved all of you, so many friends, constituents, he just loved you all. This is so fitting and so just that you all would find this as an opportunity to honor his legacy,” said Michael Collins, who served as Lewis’ chief of staff for 21 years.

Lewis loved art and art was his life.

“In my 21 years of serving the congressman, there was not a moment where art did not play a part of his life and mine and everybody he touched. I’m so struck by this piece of work because we spent time traveling the world, traveling this country, and we never missed an opportunity to stop and appreciate art,” Collins said.

Time and time again, Lewis would comb through catalogs and bid on art. When the congressman couldn’t bid on art in person, he would leave it up to Collins to bid online.

“I had the task of trying to get him the most precious pieces of art that he saw in the book, that he went through meticulously and picked out with his magnifying glass,” Collins said.

Collins added he was struck by the posture of Lewis chosen for the statue.

“His pose here was something that meant so much to him because he just wanted to thank everybody,” Collins said. “That was a way of thanking everybody. That was a way of his expression of showing love to everybody. And so that’s why this is so fitting of a posture for the congressman, to be saying thank you, I love you.”

The congressman would be honored by this gesture of love and legacy, he added. 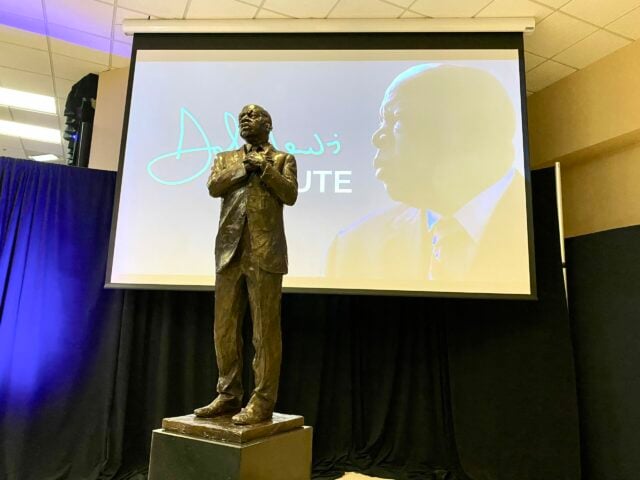 A smaller version of the John Lewis monument that will be on the Decatur Square was on display during an artist reception on Thursday, Dec. 29, at the Maloof Auditorium. Photo by Zoe Seiler.

“It is indeed a special and momentous occasion,” Garrett said. “Commissioner Mereda Davis Johnson and I desired to remember Mr. Lewis as an American hero for his pivotal role in the Civil Rights Movement of the 1960s and his lifelong fight for human rights, dignity and equality for all people as a congressman representing Georgia’s congressional district for over 30 years.”

Decatur is right in the middle of the fifth congressional district.

“In addition, we stated that we further sought to celebrate Mr. Lewis’ remarkable life and the way in which he bridged the gap between earlier generations of civil rights activists and today’s younger activists who are continuing to fight for justice and equality for all people,” Garrett said.

Garrett and DeKalb County CEO Michael Thurmond recognized the involvement of young activists in the effort to get the Confederate monument removed from the Decatur Square.

“One of the proudest moments that I will remember during my service in this county was that Juneteenth day in 2020 when we stood there…at the historic courthouse, on the lawn, standing there with Commissioner Mereda Davis Johnson and others watching that crane literally rewrite history, not just rewrite history but create new history for DeKalb County,” Thurmond said. “A monument that represented bigotry and division and hatred will be replaced by a monument to a man who loved, who cherished this nation and brought all people of all colors together.”

Rep. Hank Johnson represents Georgia’s 4th congressional district, but he has always considered the DeKalb County Courthouse and surrounding area to be his area.

“I practiced law here. I was a magistrate court judge, a county commissioner,” Johnson said. “I just always felt like the city of Decatur was mine, but the truth of the matter is that every day of the 16 years that I have served in Congress, this area has been represented by Congressman John Lewis. This is his courthouse. This is his city. This is his location. It’s very fitting that as that Confederate monument was taken out, it’s a great area to put a memorial to a man who was not divisive and who was not about hate. He was about the opposite. He was about love, brotherhood, sisterhood, friendship. These were the ideals that John Lewis stood for.”

Lewis had been a shining light to Johnson and in Congress.

“It’s said that the Congressional Black Caucus is the conscience of the Congress, but John Lewis was the heart of the Congressional Black Caucus. He was also the heart of Congress. The man had such moral standing that wherever he was, it brought the best in people, the very best in people,” Johnson said. “John Lewis will forever be memorialized in DeKalb County as a man of courage, honor, compassion, wisdom, justice, all of those good things.”

For more information about the task force, click here.