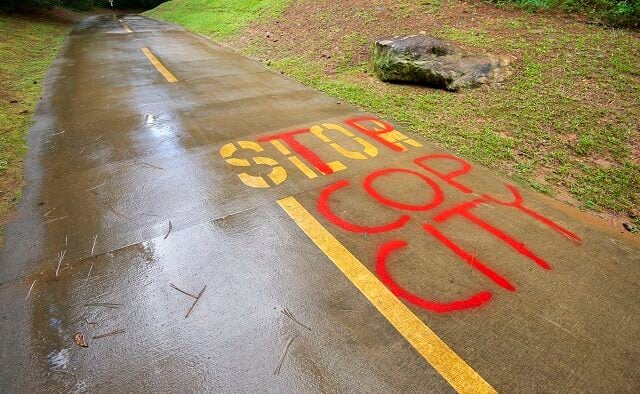 Activists opposing the construction of “Cop City” at the Old Atlanta Prison Farm have occupied the site and neighboring Intrenchment Creek Park, pictured here, the subject of a controversial 2021 40-acre land swap between DeKalb County and Blackhall Studios. Photo by Dean Hesse.
Share

DeKalb County, GA — The conflict between activists trying to stop the construction of a police training center and the police officials trying to build it came to a head on Dec. 13.

“Yesterday, December 13, 2022, our agents assisted APD and other local, state, and task force members in an operation to remove barricades blocking some of the entrances to the training center,” the Georgia Bureau of Investigation announced. “Prior to yesterday’s operation, APD and other agencies had made several arrests over the past few months for the ongoing criminal activity at the site location. Some of the criminal activities include carjacking, various crimes against persons, destruction of property, arson, and attacks against public safety officials. Law enforcement continues to address the criminal acts committed by the individuals that continue to occupy the area of the proposed training site. Yesterday, several people threw rocks at police cars and attacked EMT’s outside the neighboring fire stations with rocks and bottles. Task force members used various tactics to arrest individuals who were occupying makeshift treehouses.”

Stop Cop City protesters planned a press conference at 10 a.m., but according to an Atlanta Journal-Constitution reporter, police blocked the roads leading to the location where the press conference was supposed to be held.

In a press release about the press conference, Stop Copy City offered a different version of events than the one provided by the GBI. The activists described the event as a “police raid of the forest defense encampment in Weelaunee People’s Park and the Old Atlanta Prison Farm.

The organizers said police used “extreme and unjustified measures” that included “chemical weapons, destruction of people’s shelters and the forcible removal of at least two people walking on the trail at gunpoint.”

“One of the people who was arrested is a local resident and a supporter of the movement but not involved in the encampment,” the Stop Cop City movement said in a press release. “They shared that while walking on a trail in the forest, they were detained at gunpoint by the police without any justification given.”

The following people have been arrested and taken to the DeKalb County Jail, according to the GBI.

— Leonard Vioselle, age 20, accused of: Criminal Trespass, Domestic Terrorism, Possession of Tools for the Commission of the Crime