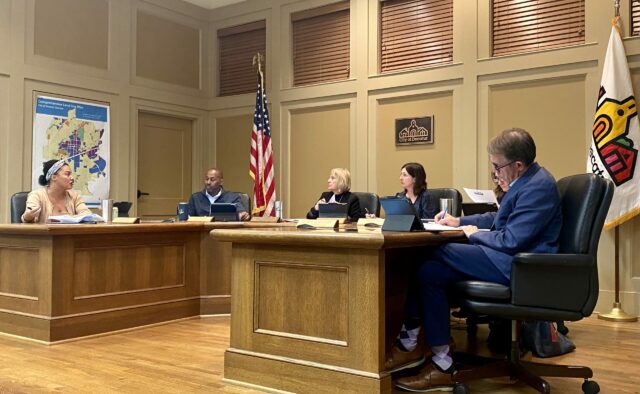 Decatur, GA — Security cameras will be installed in several city of Decatur parks and in downtown Decatur. The Decatur City Commission, at its Dec. 5 meeting, approved two project budgets for the cameras.

The board approved two contracts with ISO Network LLC. One is project budget is $60,000, and the contract is for about $50,069 for cameras in city parks “that have been plagued by vandalism as well as graffiti,” Police Chief Scott Richards.

The other project budget was set at $51,000, and the contract is for $46,500 for cameras in the downtown business district. Seven cameras will be installed in downtown Decatur.

“The downtown business district area project was instituted well in advance of the one for the city parks, however due to certain factors, one of them being the pandemic, it’s resulted in the consolidation of these projects into this proposal…,” Richards said.

The city anticipates the project to be finished in about two to three months.

The cameras will record footage and video could be monitored live, although Richards and City Manager Andrea Arnold said the police department nor city staff will monitor the footage live.

“Providing cameras in city parks as well as in the downtown business district will make the city of Decatur a safer environment for residents, businesses and visitors that come into our city, as well as provide the police department an investigative tool whenever crimes do occur in those specific areas for us to go back and be able to review video footage,” Richards said.

The police department has a written policy that lays out who can view video footage, when it can be viewed, and what’s needed to be able to look at the footage. The intent is that after an incident is reported, the video can be used as an investigative tool.

“From a police department standpoint, they will not be continuously monitored,” Richards said.

The board also established a project budget of $50,000 and awarded a contract to Johnson Controls for about $45,001 for a computer server for the security camera system.

The contracts were approved with 4-1 votes. Commissioner Lesa Mayer opposed, stating she was worried about the implications and possible profiling that could occur with using security cameras. She also wondered if the implications related to equity were fully considered.

“This gives me great panic,” Mayer said. “I am deeply distressed because – while I understand that safety is paramount in this city and I absolutely know that we have the best intentions when it comes to keeping our community safe – practices like these tend to be predatory.”

She wondered what mitigations would be put in place to prevent profiling.

“I am very concerned about the parks because it is very apparent to me that most of the cameras are going in parks on the south side of the tracks,” Mayer said. “That’s my community, which is fine and good, but that’s also historically Black, so we have to make sure that when we’re talking about cameras that will be monitored in communities that are still predominately people of color, like Ebster, like McKoy, that we’re really thinking about what those future implications could be and what we’re really saying when we do that.”

She added that she wants to make sure the city is covering unforeseen circumstances that could occur, and she wasn’t implying that any of the police officers “would be intentionally acting in a manner that would be less than honorable.”

Commissioner George Dusenbury agreed with the concerns, but added that he thinks cameras can be an effective tool. He said that his son had been robbed when playing basketball with a friend at Ebster Park. The cameras operating in the area helped the police department in their investigation.

“I completely understand the concerns about them being abused. It is also my experience, having worked with the city of Atlanta, is that the police department does not have the capacity to monitor the cameras at all,” Dusenbury said. “I do think that there is value and that they do help solve crimes, and they do help deter crimes.”

– In other business, the city commission approved a change order of $190,500 for cost increases due to unanticipated conditions and additional work on the Church Street cycle track project.

The project now includes additional streetscape improvements near the intersection of Church Street and Commerce Drive.

“Originally, we did not expect to make these improvements because of underground telecom utility conflicts,” Deputy City Manager Hugh Saxon wrote in a memo. “During construction, we determined that these conflicts could be avoided. Generally, the changes provide for new, wider sidewalks, curb and gutter and a wider planting strip to replace painted curb extensions for these 3 commercial properties.”

A retaining wall at 235 Geneva Street will also be replaced. It was built by the Georgia Department of Transportation in the early 1980s.

“It is located in the street right-of-way, has significant cracks and displacement in 2 locations and should be replaced,” Saxon said. “These defects were documented prior to construction and have worsened during the past several months.”

– The city commission committed $300,000 in funding for the Decatur Home ReHAB program, which extends the Martin Luther King, Jr. Service Project into a year-round home rehabilitation program. This was a recommendation in the 2020 Affordable Housing Task Force Report.

The three-day MLK Service Project will continue. For the year-round program, grants will be provided for deferred home maintenance to low-income seniors and for home rehabilitation.

“As part of Decatur’s efforts to create and maintain affordable housing and to alleviate the urgent need for home repairs, the Decatur Home ReHAB program’s objectives are to help keep seniors in their homes and to reduce financial pressures related to deferred repairs and maintenance,” Allin wrote in a memo. “This program is also eligible to provide repair of homes acquired for the purpose of maintaining permanent affordability by the Decatur Land Trust for low-income residents.”

The program will be managed by the Decatur Land Trust with the support of city staff. The approved funds will be used for about 30 homes needing an average of $10,000 in maintenance and repair costs per home. The funding will be disbursed over a three-year period.