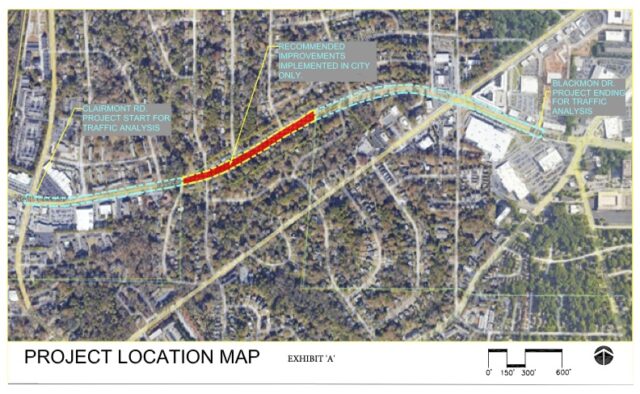 The Decatur City Commission will consider approving a project budget and awarding a contract for a transportation study and traffic calming design at the intersection of North Decatur Road and Superior Avenue. Photo courtesy of the city of Decatur.
Share

Decatur, GA — The city of Decatur is working with DeKalb County to improve North Decatur Road and address problems at the intersection with Superior Avenue.

The city and county are kicking off Street Smarts: The North Decatur Road Initiative on Wednesday, Dec. 7 from 6-8 p.m. at the North Decatur Presbyterian Church, 611 Medlock Road in Decatur.

Residents have been asking for safety improvements at North Decatur and Superior for years.

As first reported by Decaturish, new data released by Decatur Police show there have been 31 crashes at that intersection between Jan. 1, 2012, and Aug. 4, 2022. Police officers issued citations in 25 of the crashes. Seven of those crashes resulted in injuries. No deaths were reported between Jan. 1, 2012, and Aug. 4, 2022, but a recent article in the Atlanta Journal-Constitution said there have been “at least two deaths near it” since 2007.

“In 2018, Decatur’s Community Transportation Plan set forth general safety improvement recommendations for North Decatur Road’s long-discussed intersection with Superior Avenue. And in 2020, hundreds of residents participating in the city’s 10-year Strategic Planning process rallied behind those recommendations and reaffirmed the need for action along the corridor,” a post on Decatur Next states.

The intersection of North Decatur Road and Superior Avenue falls within the city limits of Decatur, but most of the road is located in DeKalb County.

“That complicates matters because improvements at the intersection, while positive, won’t necessarily affect vehicle behavior along the rest of the corridor,” according to Decatur Next. “A truly meaningful solution will require comprehensive improvements, and that will require a collaborative effort between the City of Decatur and DeKalb County, with additional input from MARTA, Emory University, and GDOT.”

There will be two parts to the project. The highest priority is a design solution for the intersection that will move toward schematics and implementation at the end of the process. The second part of the project will be imagining and mapping out ideas for an improved stretch of roadway overall.

The project will also give the city an opportunity to address flooding issues on North Decatur Road due to insufficient inlet capacity, which is a task in the city’s stormwater master plan.

Two other workshops are also in the works to review the input from Wednesday’s meeting, present proposed solutions, and eventually present the final recommendations for the area.

The city is currently working on the concept design for a stormwater master plan project in the area, which made it timely for AECOM to develop and implement traffic-calming and safety measures, Scharer said during the meeting.

She added that each short-term solution will have a different timeline, but the goal is to see changes in late December.

“It’s also my understanding that in terms of the study, it wasn’t an outrageous extra cost for the city of Decatur to take the lead and study the entire area to leave open the opportunity to make that comprehensive change together [with DeKalb County],” Scharer said.

The city plans to continue working with DeKalb County on the project to improve North Decatur Road.

“I think once we do this study, we will have data points and information to take to the county to get to be a comprehensive approach,” Decatur Mayor Patti Garrett previously said. “They have not done a stormwater master plan as of yet, so I think to incorporate this at the same time we’re doing the stormwater master plan makes good financial sense and also makes good sense to address the issue across the corridor and then…make sure we pull our county partners in to make the rest of the needed changes.”