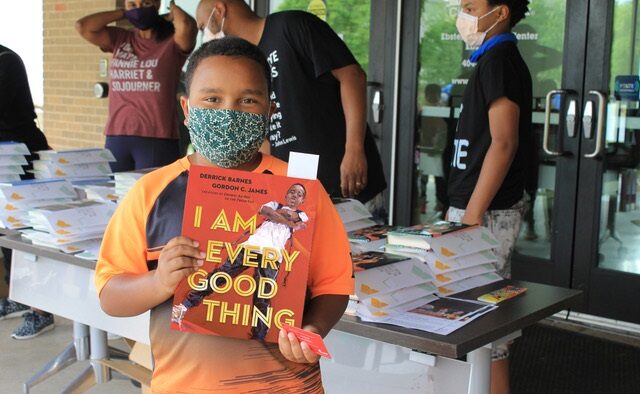 The Decatur Education Foundation partners with the Decatur Book Festival and in 2020 supported the Kidnote Presentation featured Derrick Barnes and Gordon C. James, authors of “I Am Every Good Thing.” Photo courtesy of DEF
Share

Editor’s note: This story originally appeared in our Dec. 1 e-edition, an exclusive product for paying subscribers. To subscribe, visit supportyourlocalnews.com. This story version also updates and corrects information published in the e-edition.

Decatur, Ga. — Over the last 20 years, the Decatur Education Foundation has focused on supporting students and teachers in Decatur.

The Decatur Education Foundation was established in 2002 by a group of community leaders who knew that City Schools of Decatur couldn’t always rely on state funding to meet the needs of students and teachers.

“It was a pretty forward-thinking thing at the time to think about private support, community support for our kids. Unlike a lot of education foundations, we always focus on the kids,” said Gail Rothman, executive director of DEF.

The foundation was incorporated in 2000. The DEF board had their first meeting in January 2001. The foundation started raising funds and implementing programs in 2001 and officially received nonprofit status in 2002.

Sherri Breunig, who worked for CSD, served as the executive director from 2001-2008. She worked with the school district’s attorney to start the foundation. She was paid by CSD as an in-kind donation, so DEF’s funds could support teacher grants and other initiatives, Rothman said.

Eventually, the DEF board decided to become independent of the school district. DEF hired Rothman in 2009, and she was the first staff member to be paid by the foundation. DEF currently operates with a small team and a large base of volunteers, according to the DEF website.

“Then we hit this major growth trajectory,” Rothman said. “We grew exponentially and shifted to doing bigger challenges facing our kids. We went from doing just teacher grants and scholarships mainly to doing more complicated things like equity, food insecurity, mental health and those become core areas of our work.”

“Our mission now is, and how we see ourselves, is we are a connector, so we connect people, resources and ideas to solve the challenges that kids face and that keep some of our kids from being successful,” Rothman said.

“The year of strategic inquiry”

The foundation works with CSD, the Decatur Housing Authority and the city of Decatur to bolster community efforts and make sure all students have the opportunities, resources and experiences they need to foster their growth and academic success, the website states.

Coming out of the COVID-19 pandemic and also reflecting on the last 20 years, the foundation has to figure out what its future looks like.

There are three components to DEF’s year of strategic inquiry –  lived experience of youth, learned experience, and visits with innovators.

As part of the foundation’s efforts to listen to students, it partnered with Vox ATL to train youth facilitators to host listening sessions, so kids could share about their struggles and what would help them in the schools and the community.

In the first element of the year of strategic inquiry, DEF is again partnering with Vox ATL to train the youth facilitators and adults to host more listening sessions focusing on the future and what would help the kids thrive.

The second piece of the year of strategic inquiry is looking at research. The third aspect is visiting with innovators around the country. Rothman will be looking at youth spaces outside of school, learner-centered environments and youth advocacy.

Rothman said DEF is looking at who is doing innovative work that centers youth, like those that have youth leadership or youth serving on a board.

“It’s really about knowing the future might look different than the past did for DEF and for our kids. We’re casting a pretty wide net to create some possibilities,” Rothman said.

She added, it’s an exciting way to celebrate the 20th anniversary of the foundation.

“I’m going into it like I don’t exactly know where we’re going to end up, but I know it’s really important that we take this time to think more deeply about [the foundation],” Rothman said. “I think we’re really poised to maybe do something bigger, more innovative and impactful.”

The results of the year of strategic inquiry will depend on the staff, the DEF board and community input.

DEF has been doing work related to student mental health, which is something Rothman and DEF Board Chair Maria Pinkelton is particularly proud of. In 2021, DEF and the school district opened the Decatur Student Center at Decatur High School.

The student center was funded through DEF’s Joe’s Fund, a behavioral health fund that was created to honor the life of Joe Bodine, a 2015 graduate of Decatur High School who lost his battle with addiction in May 2016.

After Bodine’s death, his mother Lori Heemann had the idea to establish a safe space for kids and their parents to seek the help they need, so other families wouldn’t have to go through a similar experience.

The student center has been well-loved and well-used since the ribbon cutting and is a space where students can hang out and seek services, such as counseling. The center has also expanded to Beacon Hill Middle School with the creation of a student center there as well.

DEF pushed for a middle student center for a few years and the school district was able to fund the renovations this year.

Pinkelton is excited about the direction DEF is going to make sure students are mentally healthy and can face the educational challenges that might come their way. DEF funded the renovation of the DHS center and funded some of the staff positions. The school district has since assumed the salaries for the student center staff.

“It has really been great to have that support on top of the counselors in the school to have this person who is there in the student center for whatever needs the high schoolers may have,” Pinkelton said. “We are, in addition, supporting the growth of the space and looking at what the actual space look like, does it look inviting at the middle school, and bringing in the supports necessary to make middle school have this outlet for kids that need it.”

Pinkelton joined the board in 2018. She said the work DEF is doing is critical because the school system can only do so much.

“The ability that we’ve had to really move funds around, especially when it came to COVID, when it comes to the mental health work we’re doing with the student centers, it has really meant a lot to me as someone who really loves Decatur, and has a kid myself, to know we are there to offer supports where they are needed the most,” she said.

She has also been impressed with how DEF has been able to grow with CSD over the last 20 years and grow with the student population and their ever-changing needs.

“It has been a great 20 years. It has been made that great because of the love and support of our community, our businesses, our leaders who really, I think, value DEF as much as I do as a parent,” Pinkelton said.

Correction: An earlier version of this story incorrectly stated the year in which the Decatur Education Foundation was incorporated. DEF later clarified the timeline and the story has been updated with the correct information.