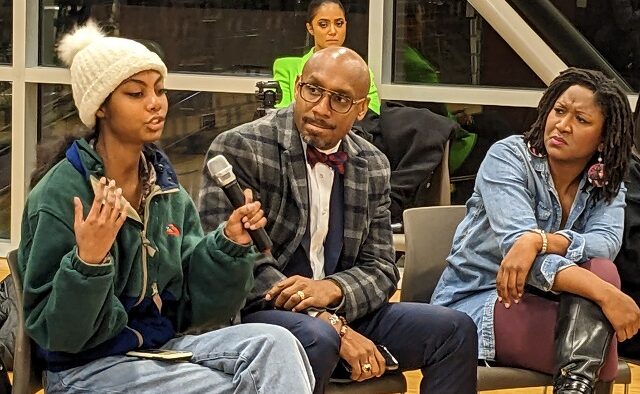 Decatur, GA — The Beacon Hill Black Alliance for Human Rights held a community town hall following a recent incident at Decatur High School where a teacher used a racial slur in the classroom.

According to City Schools of Decatur Superintendent Maggie Fehrman, “The word that was used was the n-word. It was used in the context of correcting a student that he heard use the word. Neither the student nor the teacher directed the word at anyone, but the teacher repeated the word that the student used in telling the student it was inappropriate language. CSD cannot provide any further details about the incident or the consequences, as that is a confidential personnel matter.”

Students at DHS staged a walkout Friday, Dec. 16 in response to the incident.

The community town hall was held Dec. 21 at the Decatur Recreation Center. Current students and recent graduates of DHS spoke, along with parents, teachers, members of the Beacon Hill Alliance, and other community members.

Students and teachers both spoke of repeated incidents and inadequate response from administration. Several said that they felt that the school district had tried to sweep the incident under the rug, and stated that the teacher repeated the slur not once, but three times.

Camille Charles, executive officer of the DHS Black Student Union, said that she felt that the school administration only acted after video evidence made the incident harder to ignore. “If there were no video, would the school have just downplayed this?” she asked.

Gisel Le, another member of the BSU, said, “This isn’t the first time that teachers have seemed to believe that they can say whatever they want because they are teachers.”

Kadence High, another DHS student, said that her white friends were shocked at the incident because “this is Decatur.”

“I said, come on, you know a lot of racist stuff goes down, and they don’t do anything about it,” said High. “Decatur cares more about its reputation than protecting Black students and their safety.”.

Kimberly Jones, who is head counselor at Decatur High School, said, “It’s not an incident in isolation. It’s not the first incident this year.”

Several students expressed exasperation and dismay. “Why are adults not acting like adults, but students have to?” asked DHS student Seven Baker, adding, “Why do I have to stand up to a grown man and tell him what he did was wrong?”

“We should be able to be kids,” said DHS graduate Kayla Evans.

Baker and others emphasized the power that a teacher has to shape students’ ideas and affect how they see the world and behave towards each other.

“This was a teacher. This was my teacher,” said BSU co-chair LIndsey Davis.

Baker also questioned why teachers were speaking to students about how they felt about the incident, but seemed afraid to speak to the administration.

Cassandra Black, who teaches Black history along with Alec Chisholm, said that both teachers offered to open up time to teach students about the history and social context of the “n word” but were shut down by the district. “They are more worried about [the divisive concepts bill] and us talking about it being divisive rather than the fact that him saying that was divisive,” said Black.

Staff, teachers, parents, and two City Schools of Decatur Board of Education members who were present expressed the importance of communication from students, administration, and the community.

Michael Scott, an attendance officer at DHS, said that more transparency from leadership was needed. “There are many things that we just don’t know until after they’ve happened,” said Scott.

Parent Kanika Sims encouraged students to speak up about what is happening at school.

“If you hear silence, sometimes the silence is because we don’t know. Keep speaking,” said Sims.

Board member Dr. Carmen Sulton echoed Sims, but expanded the call to the rest of the community and encouraged them to let the board know what is happening in the schools. “I assure you we all read our emails, completely,” said Sulton.

There is no code of conduct for City Schools of Decatur employees, attendees of the meeting said. Decatur resident Laura Irvin said that it was important to have a clear policy and a standard of behavior with consequences in place, not just for students but for teachers and staff as well. Irvin said that consistency was necessary to avoid liability and also for fairness. “Companies, institutions, organizations put rules in place about things they care about, and they guess and move the goal posts about things they don’t,” said Irvin. “Make them care, create the policy, and stick to it,” said Irvin.

Jana Johnson-Davis, who is chair of the Decatur School Board, attended the town hall and expressed her support for the event. “I was co-founder of the Beacon Hill Black Alliance for Human Rights,” said Johnson-Davis. “Under my leadership, the board is prioritizing anti-racism,” she added.

“We were founded as an advocacy organization for equity in education,” said Mawuli Davis, another co-founder of the Beacon Hill Black Alliance for Human Rights. Davis also urged the community not to tell students how they should feel or dictate what solutions they should accept.

“Let the young people formulate their own remedy,” said Davis.

Johnson-Davis went on to say that the board did not usually interfere in personnel matters, but it was definitely part of their job to set policy.

Lindsey Davis expressed a desire for a solution that would create lasting results. “I want to take emotion out of the equation. If he’s just fired, I don’t know that that would change things,” said Davis.

“There have been other racist or homophobic incidents of discrimination at this school, and every single time we all get really passionate about it for a while, and then it just stops,” said Lindsey Davis. She added, “We have to keep talking.”