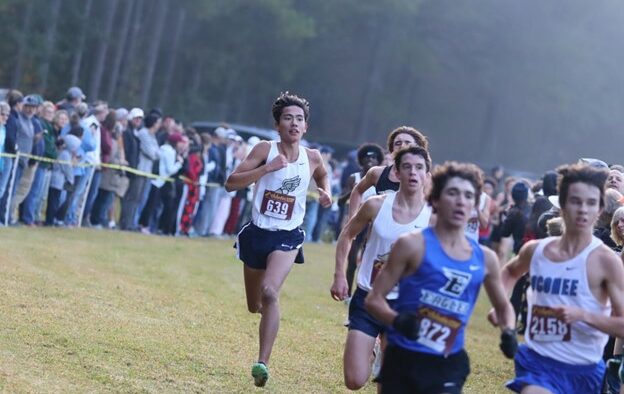 Decatur, GA — Decatur High School’s fall sports have closed the curtains on another season. From football to softball, the Bulldogs had their hands full over the past few months, highlighted by the Boys and Girls Varsity cross country team’s victories in the state championship. That was far from the only success story, however, with football, softball, and volleyball all providing their fair share of action and moments in the spotlight as well. 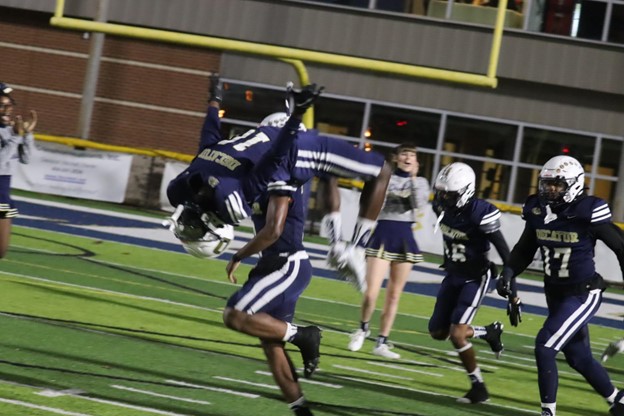 From the Round 1 playoff win vs Harris County. Photo by @kesonthedhspic

The Bulldogs followed up an impressive 2021 campaign with a regional championship and a run to the second round of the playoffs in 2022, one step further than the previous year. In Year 3 under Coach Felton, Decatur went a perfect 6-0 in the region to claim the one seed in 4-5A for the first time since 2004. The crowning moment came against Chamblee High School in a roller-coaster 40-38 win for the Bulldogs. FOX5 couldn’t have chosen a better game to broadcast as its game of the week, and the win cemented Decatur’s status as region champs.

The Bulldogs’ success continued into Round One of the playoffs. Propelled by a raucous crowd at the Decatur High School Stadium, the team swiped aside Harris Country by a score of 33-20. But all good things come to an end, and unfortunately for Decatur, that end was found in Round 2. Coffee County proved too big a test, and the Bulldogs fell by a score of 51 to 23.

All in all, though, Decatur had a lot to be proud of from its 2022 season. Despite starting off the season 1-4, the Bulldogs rallied and went on a six-game winning streak and revealed an impressive mental fortitude to surpass early season struggles. Decatur went on to register a perfect record in its region that broke an 18-year region championship drought, and the Bulldogs further proved their mettle with its first playoff victory in over a decade.

Decatur was also recognized with some individual honors. Head Coach William Felton, who has overseen increasing levels of success in his three seasons at DHS, was nominated for the NAACP Narvie J. Harris Education Award. According to the NAACP website, the award is, “Presented to an individual or group exemplifying exceptional educational leadership, dedication, and competency and has promoted the enhancement of practical and realistic educational ideas, techniques and strategies that have had a positive impact on DeKalb County students, schools, and/or educational community.” 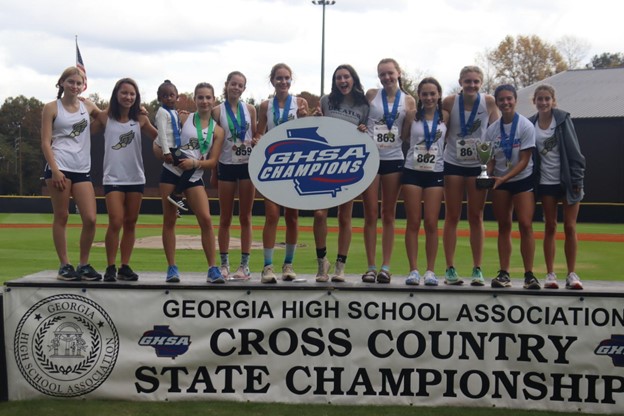 The girls cross country team at the state championship meet. Photo by @kesonthedhspic

Decatur had not just one, but two 5A GHSA State Championships in cross country this season. The boys won their third Championship in four seasons, while the girls tallied their first-ever state title. To add icing on the cake, the girls’ team went on to win first and the boys’ picked up silver at the Georgia Meet of Champions between state champions from across Georgia. Three runners – Billy Carlton, Gabby Malerba, and Jake Westing – were also all named to the Atlanta Track Club All-Metro Cross Country Team. In other words, that was one terrific season.

For Varsity Head Coach Mary Souther, the key to Decatur’s rampant success is “all because they (the runners) are willing to put in the work.” Both teams had very different routes to becoming state champions — the girls knocked their competition off the course, while the boys’ had a tooth-and-nail battle with Clarke Central that ended up going down to Decatur’s final runners.

Coach Souther said the deciding factor was runners four and five. That position had “been changing all season,” for Coach Souther, whereas “Decatur’s top 3 runners (Billy, Jake, and Zak) all finished in the top 10, as we expected”. But when it came down to the business end of the season, Sam Corso and Noah Ellis’ victories over the #4 and 5 from Clarke Central nudged the Bulldogs ahead.

The girls, on the other hand, had the race wrapped up by the end of the first mile. With six Bulldogs in the top twenty by that point, Coach Souther could breathe easier. She credits that “amazing accomplishment,” to the girls’ team’s “pack mentality.” She describes how the team bonded and willed each other forward to faster and faster times.

The season was far from perfect, however. Senior Jake Westing, who was Decatur’s second-fastest runner in the state meet, details how 2022 wasn’t as smooth as it might have looked from the outside. “It had been a rough season for the entire team, as soon as somebody got healthy, it felt like another got injured.”

However, rather than become deflated by many setbacks, those obstacles, “made the victory so much more meaningful, we were all able to pull together for the big dance.”

Westing said the “commitment and obsession” to running was a major reason the team was able to push forward no matter what and go all the way to the state championship.

“Even on bad days when one of us feels bad, we’re able to feed off of the excitement of ten other guys around us who are feeling good that day, and regardless of how we felt going into a workout, long run, or anything, we can leave knowing we gave it our best effort,” Westing said. 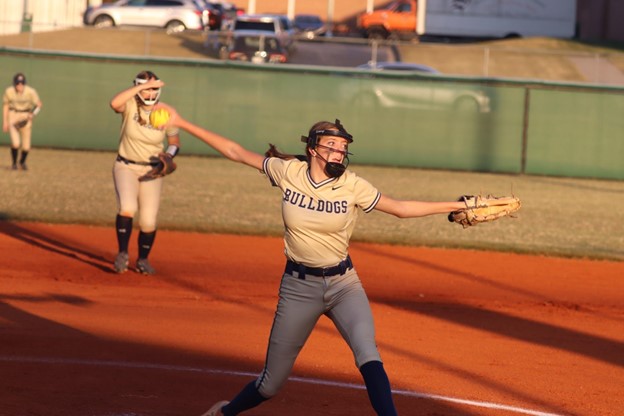 From the softball team’s away win vs Stockbridge. Photo by @kesonthedhspic

Decatur’s softball program underwent a second coaching change in as many years, but Head Coach Taryn Williams proved more than up to the task, guiding the Bulldogs to second place in the 4-5A region and into the playoffs.

Coach Williams guided a very young Decatur team to an 8-2 record in region play and a 17-10 overall standing. As she put it, “90% of the team was made of very talented freshmen,” but the lack of experience became an advantage. “When asked to go in to fill a position, go up to bat, go into a position that they have practiced, they will do it without a question.”

This flexibility and adaptability was one of the Bulldogs’ biggest strengths and led to high points such as a back-and-forth victory over Stockbridge.  Coach Williams designated the Bulldogs’ 11-8 win “the most competitive moment I have seen from the team.” This competitive spirit was seen in practices too, where even a mere game of dodgeball seemed like a fight “til the death.”

Another highlight of the year was claiming revenge against Dunwoody. Decatur lost 12-3 to the Wildcats early in the season but flipped the script with a 9-4 triumph in the penultimate game of the season. The Bulldogs’ victory was due to more than just a desire to avenge itself; players and the team as a whole improved and melded into a unit as the season progressed.

The beginning weeks of the season were full of “moving pieces to see where each person would fit on and off the field,” but from Coach Williams’ perspective, the players “acclimated to the culture and the environment the coaching staff built (…) and became more comfortable.” Once that happened, the wins followed. Or, in the words of Coach Williams, “Once they were comfortable, they played!” 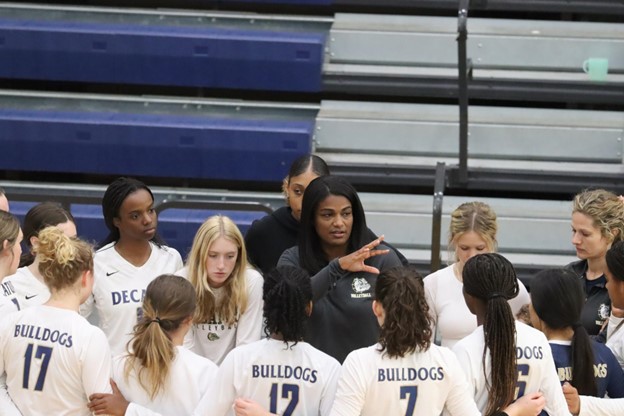 The volleyball team during their game against Northside. Photo by @kesonthedhspic

Decatur’s Varsity volleyball team also capped its season as region runner-ups and made an appearance in the state playoffs. The Bulldogs boasted a 4W-1L region record and an overall 16-9 record before ultimately falling to Northside High School after a closely contested best-of-three series. Despite losing 3-0, the margins were as close as could be; Decatur tallied 66 points across the 3 games, just short of Northside’s 74. Even if the result wasn’t what the Bulldogs wanted, they showed an impressive array of talent across the season that’s sure to take them far before long. 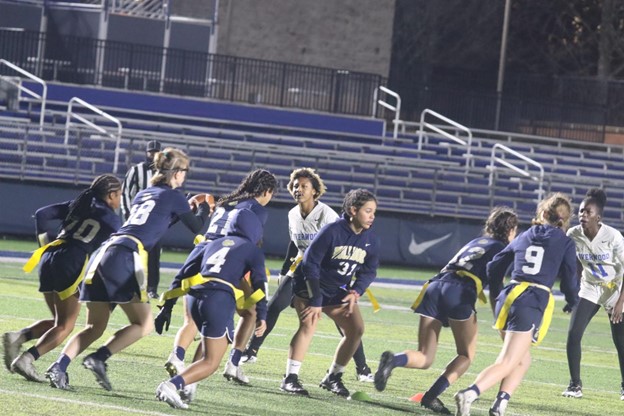 In the program’s third year of existence, Decatur High varsity flag football team finished second in its region with a 3-1 record, part of a 5-5 overall record across the entire season before a loss in the region tournament to Therrell High School. Its impressive growth for a team that didn’t even exist in 2019, and with interest in the team continuing to expand, the future looks bright for flag football at DHS.