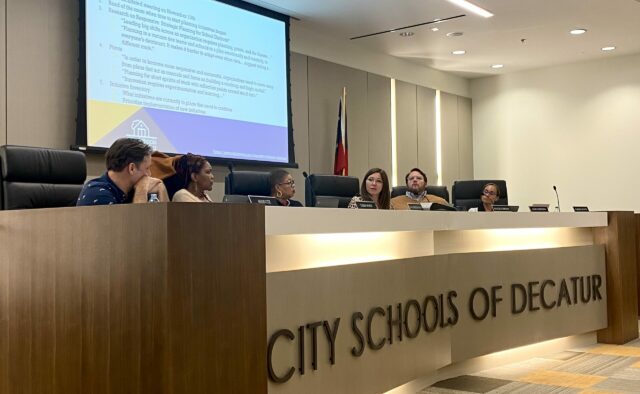 The Decatur School Board met on Tuesday, Dec. 13, at the Wilson Center to discuss the senior tax exemption and the mid-year budget amendment. Photo by Zoe Seiler.
Share

Decatur, GA — Seniors in Decatur can anticipate they will continue to receive relief on school taxes.The City Schools of Decatur School Board, at its Dec. 13 meeting, approved the senior homestead tax exemption.

The current exemption expires in December 2023. The exemption for CSD will have to be approved by the Georgia General Assembly next year, and it will be on the ballot in November 2023 as a referendum.

The current exemptions for school taxes are:

The school board did not make any changes to the S-6 exemption. Although the board increased the dollar amount of the household adjusted income for seniors ages 65-69 from $53,000 to $62,000 for the S-5 exemption. The board maintained the exemption of $200,000 of assessed home value ($400,000 appraised value).

The school board is aiming to extend the senior homestead tax exemption for an additional five-year period.

“To be clear, everyone that currently qualifies will qualify under the new exemption. Additional seniors will qualify under this exemption because we are increasing the amount that we allow for income,” school board member Hans Utz said. “Nobody that currently qualifies will be taken off. There will be some people that get added because we are accepting a higher income level.”

In other business, the school board approved the mid-year budget amendment for the general fund.

“The budget amendment includes changes in staffing and increased operating expenditures for nursing,” the agenda packet states. “Other amendments include revenue revision to reflect an increase in earnings on investment.”

The budget amendment includes an adjustment to staffing. The fiscal year 2023 budget was built on the projection that about 26 positions would be eliminated through attrition, but only 10 positions were eliminated.

Some positions were also upgraded to align pay with job responsibilities, the district increased the number of days for some positions to ensure coverage, and there were additions to the budget for counselors. Budget increases were also made to certified staff who earned a higher degree.

“After implementation of the staffing allotment, it was determined that only 10 positions [could] be eliminated due to a limited number of employee attrition and positions that required unique skill sets and certification requirements,” the budget amendment states. “The tentative budget presented at the March board meeting projected savings of approximately 2 million from eliminated positions; however, the actual savings was approximately $965,190.”

That leaves 16 positions that are filled and need to be funded, since the funding was not included in the FY 23 budget.

With the changes to the amendment, about $939,920 was added to the budget.

Fehrman said in August that the administration found an error in the financial software that caused the district to over count staff members.

“Corrections to areas that were overstated, and budget adjustments have been processed for the various functions which will show increases or decreases for each function when compared to the initial amendment 2,” the amendment states.

The budget amendment included new requests as well, which include:

– $445,100 for special education teachers and three paraprofessionals to provide additional support and services for students with individualized education plans.

– $50,000 to contract out professional services for nursing to ensure there is coverage for school nurses and students are provided with medical assistance as needed.

– Increasing the earnings on investment budget to $181,000 based on increased interest rates.