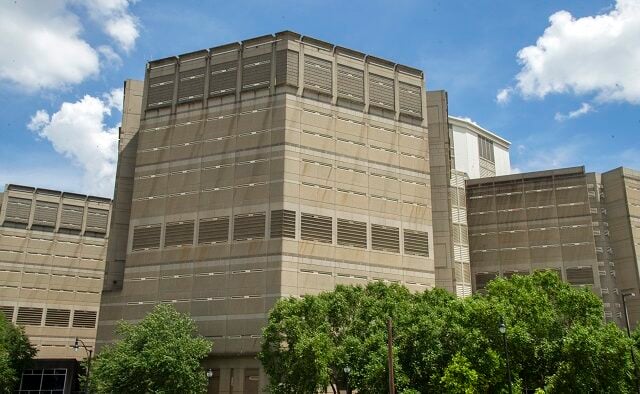 On Dec. 28, the DeKalb Sheriff’s Office provided records showing that deaths have been underreported over the years. There were two additional deaths in 2022 that went unreported, bringing the total for 2022 to nine inmate deaths. For the most up-to-date story, click here.

DeKalb County, GA — The DeKalb County Sheriff has asked the Georgia Bureau of Investigation to probe the deaths of two inmates who died within the last 24 hours, marking the sixth and seventh inmate deaths reported this year.

The county reported the two deaths on Dec. 27 and said they were “unrelated.”

Based on a review of press releases from the DeKalb County Sheriff’s Office, 2022 is the deadliest year since 2015 for DeKalb County jail inmates. 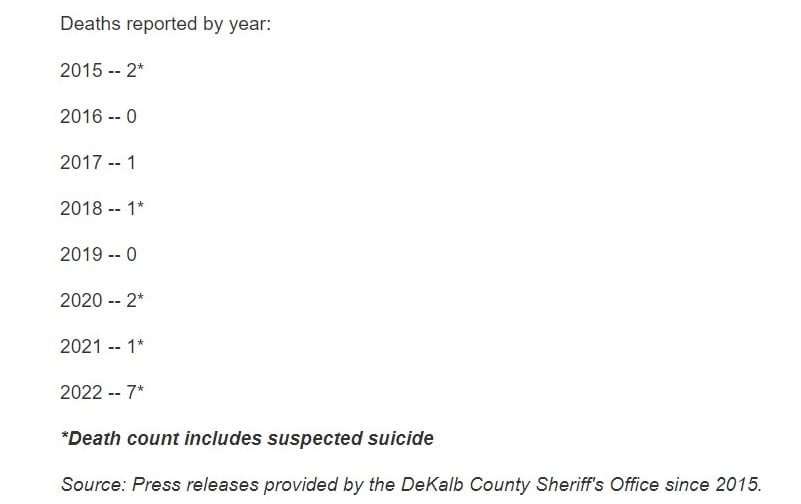 The Sheriff’s Office reports that Lithonia resident Anthony Lamar Walker, 34, was found unresponsive in his jail cell on Dec. 26. He was later pronounced dead. He’d been in custody since Dec. 18, 2022 and was accused of aggravated assault and possession of a firearm by a convicted felon.

On Dec. 27, officials at the jail found Clarkston resident Jackson Orukpete, 57, unresponsive in his jail cell. He was later pronounced dead. He had been in custody since July 25 and is accused of domestic violence.

“The Medical Examiner’s Office has not released information on the causes of death, pending investigations by the sheriff’s Office of Professional Standards,” the sheriff’s office recent press release says. “Sheriff Melody Maddox has also requested an independent investigation by the Georgia Bureau of Investigation.”

In August, the Sheriff’s Office reported the deaths of two inmates within a week, describing those incidents as “unrelated.”

“College Park, Georgia resident Michael Assevero, 65, was found hanging in his jail cell and unresponsive on Sunday, August 14, 2022 and was pronounced deceased following unsuccessful emergency medical treatment by on-site inmate health services and DeKalb EMS,” the press release from the Sheriff’s Office says. “Preliminary reports indicate suicide as the apparent cause of death.”

He’d been in custody since Aug. 11 and was arrested for failure to appear in court on accusations he’d violated the Georgia Rico Act. That same week, Snellville resident Viktor Ivanov Radunchev, 27, was found hanging in his jail cell and unresponsive.

He was soon pronounced dead by DeKalb EMS. Preliminary reports in that case indicated the inmate committed suicide. He’d been in custody since Aug. 13 on accusations of domestic violence and assault.

In July, the sheriff’s office reported two inmate deaths within the span of about a week.

Stone Mountain resident Vernon Dennis Head, 48, was found unresponsive in his jail cell on July 22. He had been in custody since January 2021 after being accused of making terroristic threats. The medical examiner found he died due to natural causes.

“The cause of death is listed as myocardial fibrosis and the manner is natural,” the Medical Examiner’s Office reported.

The Medical Examiner ruled that Colman’s death was natural, caused by “peritonitis due to intestinal perforations.”

In February, the DeKalb Sheriff’s Office reported the death of an inmate from an apparent suicide.

“Officers performing security checks discovered Jaquay Smith, 21, of Stone Mountain unresponsive inside a cell on February 5, 2022,” a press release from the Sheriff’s Office says. “Emergency medical services were rendered immediately by jail medical staff and DeKalb Fire Rescue, but Smith was pronounced deceased upon his arrival at Grady Memorial Hospital.”

He had been in custody since Feb. 1 on warrants issued by the DeKalb County Police Department. He was accused of aggravated assault with a weapon and armed robbery.