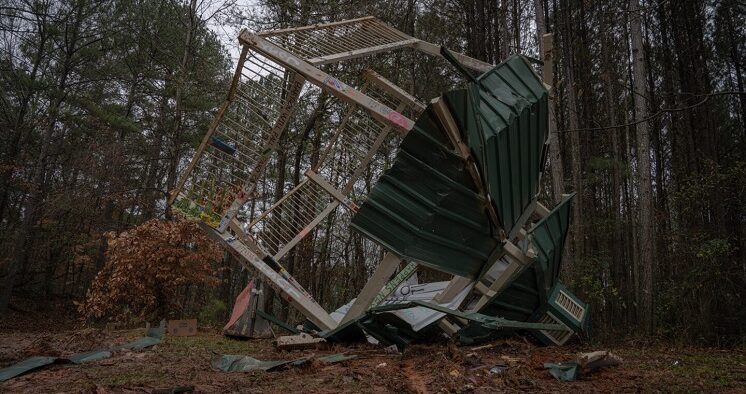 A gazebo sits, flipped upside down on the side of the road at the entrance of Intrenchment Creek Park as demolotion begins on the site. (Matthew Pearson/WABE)
Share

The paved walking path lay crushed and pushed to the edges of the forest, and a gazebo sat flipped upside down on the side of the road.

Demolition has started at the entrance to Intrenchment Creek Park in DeKalb County on land adjacent to the proposed Atlanta Public Safety Training Facility, often referred to as Cop City.

The land was originally traded for a nearby parcel by the county to a local film studio and has been part of the ongoing protests at the site.

Opponents of the public safety training facility have protested the development of this land and DeKalb County’s land swap with Blackhall Real Estate Phase II LLC because they say the plans for the land will degrade Intrenchment Creek and the waters that flow into the South River.

DeKalb County already faced a complaint under the Clean Water Act for not maintaining the cleanliness of watersheds, including the creek, a decade before the land swap happened.

Blackhall has tried to develop the land all year but has been physically stopped by protesters who have threatened contractors and set fire to equipment. The protesters say they remained on site because the terms set between DeKalb County and Blackhall in October 2020 state the company will build up the green space on its former land in conjunction with the demolition of the forest and park area.

The intention was to minimize the loss of park space for people to enjoy.

An attorney for Blackhall did not respond to questions by the time of publication.

Last week, police cleared out protesters who were living in the forest and charged five people with domestic terrorism.

This story was provided by Decaturish partner WABE.