Future of Confederate monument in Stone Mountain Cemetery under debate

Future of Confederate monument in Stone Mountain Cemetery under debate 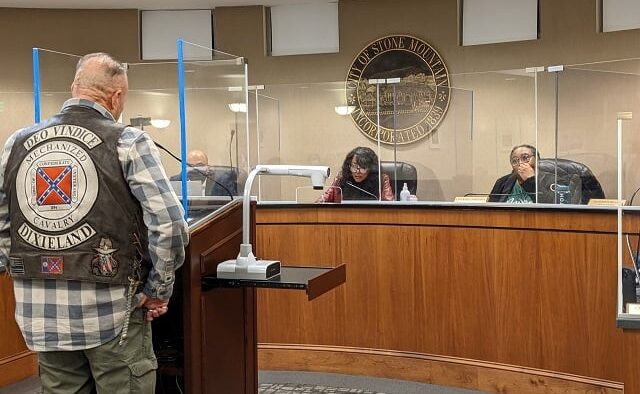 David Adderhold of Dacula, Georgia spoke on behalf of the group and pointed out that it is illegal in the state of Georgia to move markers for military graves, including Confederate military. Adderhold stated that the law does not require that bodies be present for a monument to be considered a military grave marker.

When a one-time contract to clean up the cemetery was approved in September, council members Clint Monroe and Gil Freeman objected to using public funds to maintain the Confederate portion of the cemetery. At that time, Freeman said that he felt that the Confederate section should be removed, but no decision to do that was made.

Councilmember Gina Stroud Cox said that her mother is buried in Stone Mountain Cemetery and that the city has an obligation to maintain it as a city asset.

“We’ve had this conversation. This is not the battle I choose to fight. I have other battles,” said Cox.

Council member Chakira Johnson agreed, saying that there were far more people buried in the cemetery who had nothing to do with the Confederacy.

Monroe said that the problem from his point of view is the existence of a memorial for the Confederacy on city property in a section where no one is actually buried.

“I can’t in good conscience say that we should continue to maintain a memorial to the Confederacy in our cemetery. The purpose of the cemetery is for Stone Mountain dead,” said Monroe. Monroe suggested that if the marker were removed that the empty space could be opened up for burials. “The use of the cemetery to bury the dead is an appropriate use of public funds,” said Monroe.

Monroe made a motion to assert that the purpose of Stone Mountain Cemetery is to bury people and not to have, in his words, a “political memorial to the Confederacy.” City Attorney Jeff Strickland suggested that the motion be amended into a directive to research the legal ramifications of removing the Confederate memorial marker. Monroe agreed, and the results will be brought to the council’s January work session.

During the budget discussion at the Dec. 20 meeting, Freeman moved to withdraw all public funding from the Stone Mountain Cemetery. The motion failed, lacking a second.

— The Stone Mountain City Council held a second reading of the city’s fiscal year 2023 budget at their hearing and work session on Dec. 20. Revisions to the budget include the addition of a police officer, a custodial staff position, and reactivation of an assistant city manager position. A 3% cost of living raise was removed. No new taxes will be imposed.

Public comment focused on complaints that the revised budget was not available for citizens to review.

The council decided to postpone a vote on the budget until Wednesday, Dec. 28 at 6 p.m. so that councilmembers can review changes to the budget.

— The council approved a Stone Mountain Police Department’s request for a purchase of equipment, including seven Flock license plate recognition cameras. The two-year contract, which includes safety assessment, installation, and software, costs a total of $37,450. The cameras will cost $17,500 per year after the contract term ends. The council approved the purchase of other fleet equipment, including tasers and body cameras.

The council also approved a Stone Mountain Department of Public Works request for an equipment purchase including a dump truck, bucket truck, and lawn mower, totaling $382,778.

— The city approved an intergovernmental agreement between the City of Stone Mountain and the Stone Mountain Downtown Development Authority, which includes a provision for the city to fund the DDA as outlined in the city budget.

— The council approved the city’s holiday schedule for 2023, which includes both Juneteenth and Election Day as paid holidays.